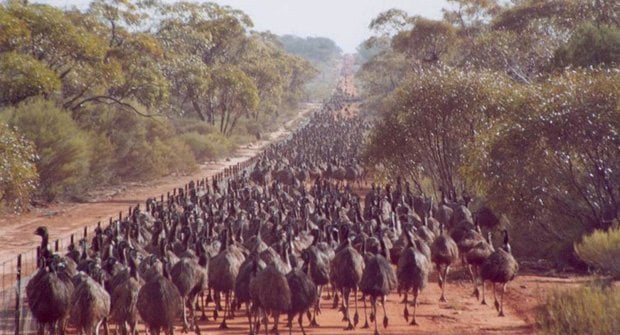 Emus at the State Barrier Fence are deflected from farming land in an image from the WA Department of Agriculture and Food.

PLANS TO EXTEND Western Australia’s historic ‘rabbit-proof fence’ have been described as cruel and clumsy by environmental groups, who say native wildlife will be the victim.

The 100-year-old fence, now called the State Barrier Fence, is the longest manmade structure in the state. It runs for 1170km through the state’s southwest, from the Zuytdorp cliffs north of Kalbarri to east of Ravensthorpe.

Originally erected to keep rabbits from spreading westward, the fence is undergoing a multi-million dollar upgrade to protect more agricultural lands in the southwest from ‘pest’ species, including wild dogs, dingos, emus and kangaroos. It includes major plans for a new barrier, up to 700km long, through pristine woodlands leading down to Esperance, and $5 million has been put aside for that.

Viv Read, invasive species director for WA’s agriculture department, says the plan is a response to the region’s farmers, who complain of a rising incidence of wild dog attacks and crop damage from flocks of emus. “Extending the fence is a non-lethal way of controlling vermin and the alternative is baiting, shooting or trapping,” he told Australian Geographic.

“The primary purpose and major benefit of the State Barrier Fence is to minimise emu impact on cropping areas,” Viv says. “Major emu migrations occur about one year in seven. There were reports of numbers building late last year but they have since dissipated.”

But major environmental groups say that vulnerable native species are caught in the fence and meet painful deaths. The Wilderness Society, Gondwana Link and Pew Environment Group say that migrating emus have a history of massing in their thousands along the fence, and then dying of starvation or having to be shot.

“The southward movement of tens of thousands of emus in certain seasons is one of Australia’s greatest examples of wildlife migration, yet the fence is specifically designed to cut off these movements,” says Gondwana Link director Keith Bradby. “How many pictures of dead corpses do they need?”

Building a high barrier fence treats all native wildlife as “vermin” and it prevents animals from moving through bush corridors, he adds. “At no time is it more important that native animals are able to move across the landscape, given the rapid advance of climate change.”

BirdLife Australia has also expressed concern about the threat to emus, describing the plan to extend the barrier fence as disturbing and puzzling, and a major disruption to ecosystems.

Dingo expert Dr Euan Ritchie, from Deakin University in Melbourne, says that Australia has an outdated and inefficient approach to pest management. He argues that excluding predators such as dingoes can be counterproductive, leading to more kangaroos and rabbits where those predators are absent.

“We know from other places that setting up barriers can have unforeseen consequences, and we shouldn’t forget the original rabbit-proof fence didn’t keep the rabbits out,” he says. “And why is animal welfare not being talked about in relation to building a fence of this scale?”

Viv Read says environmental studies will ensure that all wildlife impacts are taken into account before a final alignment of the route for the new fence is made in the near future.