Recipe for the perfect sandcastle found 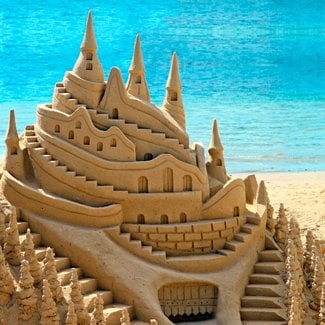 IT’S THE QUINTESSENTIAL beach activity – building sandcastles. Now scientists have discovered the recipe for a perfect sandcastle: a delicate balance of 99 per cent sand and one per cent water.

For their contribution to science, physicists in Amsterdam and Paris spent hours building beach sand columns in their laboratories to come up with a complicated mathematical formula for a stable and long-lasting sandcastle.

The answer? Not too much water, they concluded – just enough to form small ‘ capillary bridges’ that form a force of attraction between grains of sand, making them stick together. If there is too much water, the structure is destabilised by its own weight and a landslide can occur.

“If this optimum concentration is used, sandcastles reaching five metres in height can be built,” said Daniel Bonn in a statement on the report that elevates a popular childhood pastime into the pages of the journal, Nature Scientific Reports.

The formula also sets out the desired height-to-base-diameter ratio and sand compacting force. For example, a 7.5cm-diameter sandcastle could theoretically be built to a height of 2m.

Another trick is to pack down the sand; the researchers ‘thumped’ typical beach sand 70 times in a PVC pipe before the tube was removed to test the free-standing sandcastle.

The findings are of interest for civil engineering and soil mechanics, fields which deal with structural stability, wrote the scientists.

“In addition, it explains the maximum height of, and provides us with a recipe to construct the perfect sandcastle.”

The scientists also found that using hydrophobic (water-resistant) sand, they could construct an underwater sandcastle, since the forces between grains in the structure were constant. And because the water means the effective weight of the sandcastle is smaller, it’s possible to build more elaborate sandcastles under the water than above.