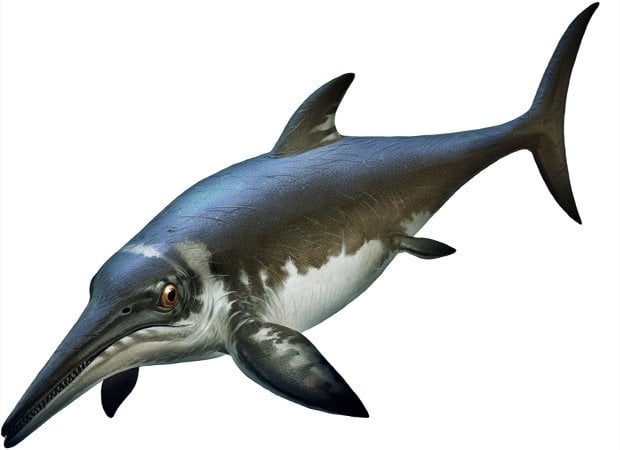 ICHTHYOSAURS DEVELOPED LESIONS from bone necrosis because they evolved the ability to dive deep and stay down for long periods of time, according to Australian research.

Ichthyosaurs were a group of dolphin-like marine reptiles that lived between 245 million and 90 million years ago. Only one species is known from Australia, but the group was widespread and successful across the world; many were specialised to feed on squid-like ammonites and they had the largest known eyes of any vertebrates.

In an earlier study led by Professor Bruce Rothschild from the University of Kansas, USA, bone lesions found on the fossil bones of ichthyosaurs were reported to be caused by these ancient marine reptiles getting the bends from rising rapidly and suddenly to avoid predators.

Diving deeper and staying there for longer

However, in a reply to the article, recently published in the journal Naturwissenschaften, Australian pathologist Associate Professor John Hayman from the University of Melbourne says the bone damage wasn’t caused by the need to escape quickly from predators, but from evolving the ability to dive down deeper and stay there for longer.

“These lesions weren’t a result of coming to the surface quickly, but because they stayed down for such a long time. When they surfaced to sleep at night, nitrogen would seep out and cause damage,” says John. “That’s when they developed the bends.”

In humans, a rapid ascent from deep-diving causes nitrogen to form bubbles in the blood, which can produce immediate symptoms like joint pain and headaches – a condition we call the bends. But bone lesions caused by dysbaric bone necrosis would take months if not years to become apparent.

“Bone necrosis in humans develops within weeks or months, but there’s a gap between the damage and the symptoms,” says John. “For these marine reptiles, they wouldn’t have any symptoms at all until much later in life.”

Ichthyosaurs of the Jurassic and Triassic

According to John, the lesions found on the fossilised bones of the ichthyosaur specimens are similar to those found on deep-diving sperm whales (Physeter macrocephalus) and humans, which suggests some interesting similarities in the physiology of all three species.

For palaeobiologist Assistant Professor Benjamin Kear from Uppsala University in Sweden, while Bruce’s scenario of rapid surfacing to escape late Jurassic super-predators may be feasible in some individual cases, it wouldn’t explain all of the cases of bone damage.

“Marine super-predators did not just appear in the late jurassic,” says Ben. “Indeed, gigantic predatory ichthyosaurs, up to 10m long, are known from [much earlier].”

Of the two studies, Ben adds:  “If we don’t have different interpretations then we are not doing science. Don’t forget that we are dealing with the preserved fragments of animals that went extinct nearly 90 million years before our species even evolved… There are always going to be arguments, when you don’t have all the facts.”