A pair of critically endangered northern hairy-nosed wombats have been born at a Queensland refuge.
By Dana Gluzde • December 21, 2011 • Reading Time: 2 Minutes • Print this page 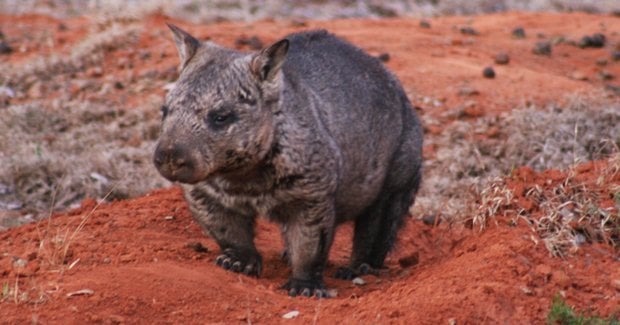 A northern hairy-nosed wombat outside her burrow. (Pictures courtesy of the Department of Environment and Resource Management)

A PAIR OF RARE NORTHERN hairy-nosed wombats (Lasiorhinus krefftii) have been born at a nature refuge in Queensland.

The first young joey emerged from its burrow on 3 October, 2011 at the Richard Underwood Nature Refuge near St George, in the north-west of the state. A second joey followed less than a week later on 7 October 2011.

It’s the first baby wombat born since the colony was established. After almost a year in their mothers’ pouches, the joeys were spotted one night after their playful antics were caught on infra-red camera.

Dave Harper from the Department of Environment and Resource Management Threatened Species was the first to view footage of the joeys. He describes the youngsters as “extremely active, spinning around, running in and out of the burrow and jumping.

“The joeys often jump on and bounce into mum, and playfully (we think) bite and hassle [the mother],” he says. “They are very curious about their environment, sniffing everything and digging.”

“There appears to be a strong bond between mother and joey. There are lots of gentle touches between the two, and the joeys have also brought out a ‘playful’ side in their mothers.”

The birth of the joeys is a promising sign the Department of Environment and Resource Management’s wombat relocation program is a step in the right direction for conserving the species, which is listed as critically endangered on the IUCN Red List. Provided climate conditions and seasons remain steady, there is the potential for wombat numbers to continue to increase, they say. A picture taken from footage of mother and young baby wombat at the Richard Underwood Nature Refuge in outback Queensland.
(Picture courtesy of the Department of Environment and Resource Management).

Only about 138 individuals of the wild northern hairy-nosed wombat remain in one pocket of Australia – Epping Forest National Park (Scientific) in central Queensland. So these recent births are highly significant both for this species, and for the local St George area.

“There have been no recorded births of the northern hairy-nosed wombat outside of Epping Forest National Park within the past 50 years and for more than 100 years in the St George area,” Dave says.

“These births have exceeded our expectations for this re-introduction project. To be able to move wombats to a new site and have them breed within two years is remarkable,” says Dave. “This is a significant milestone in the recovery program for the northern hairy-nosed wombat. The births indicate that we can select and prepare a site and successfully translocate wombats to establish a colony.”

The Queensland Minister for Environment Vicky Darling says “The colony was established at the Nature Refuge as the species was at risk of extinction – even from just one catastrophic event such as major flood.”

“Celebrating our two new babies means our huge gamble has paid off,” says the minister.