A newly hatched white kiwi is thought to be the first to be born in captivity, say New Zealanders.
By AAP with AG Staff • May 25, 2011 • Reading Time: 2 Minutes • Print this page 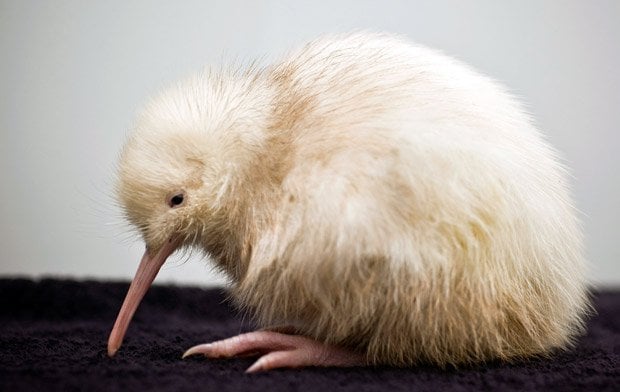 A rare white kiwi chick is seen only days after being hatched on May 22, 2011 in Wellington, New Zealand. (Credit: Getty)

HE MIGHT HAVE CRACKED his way into the world just weeks ago but little Manukura’s shock of blond fur has already won him chiefly status in New Zealand.

The rare white kiwi chick, whose indigenous Maori name is fit for a chief, is attracting lashings of attention in New Zealand, where kiwi are synonymous with the national identity. Far from being a bottle blond or even an albino, Manukura is the descendent of a rare sub-species found on a remote island sanctuary, Little Barrier Island.

When his shell cracked open on May 1, his carers were shocked at what they saw.

“As far as we know, this is the first all-white chick to be hatched in captivity,” says Bob Francis from Pukaha Mount Bruce, a mainland sanctuary home to many kiwi. “The kiwi population on Little Barrier Island has birds with white markings and some white kiwi, but this was still a big surprise.”

His name means “of chiefly status” and, when broken down, Manu means something of high rank while Kura means precious, and also feather.

“Every now and then something extraordinary comes along to remind you of how special life is,” Pukaha board member Jason Kerehi says. While they were celebrating all 14 kiwi hatched at the North Island sanctuary this year, Manukura was “a very special gift”, he says.

Unfortunately though, Manukura’s celebrated cream-coloured fur may land him in trouble with predators.

“A white kiwi might really stand out, making it more vulnerable,” says Chris Lester from the country’s Department of Conservation. For the time being, the chick is being hand-reared in the sanctuary’s kiwi nursery, where bird lovers can see him during his daily weigh-in.

When he’s deemed old enough to protect himself, he will be released into the sanctuary along with his 13 peers hatched during the centre’s bumper breeding season.

The native kiwi is nocturnal, flightless and relatively defenceless. All five species are endangered or vulnerable to extinction, with several programs underway to help turn around poor survival rates in the wild.