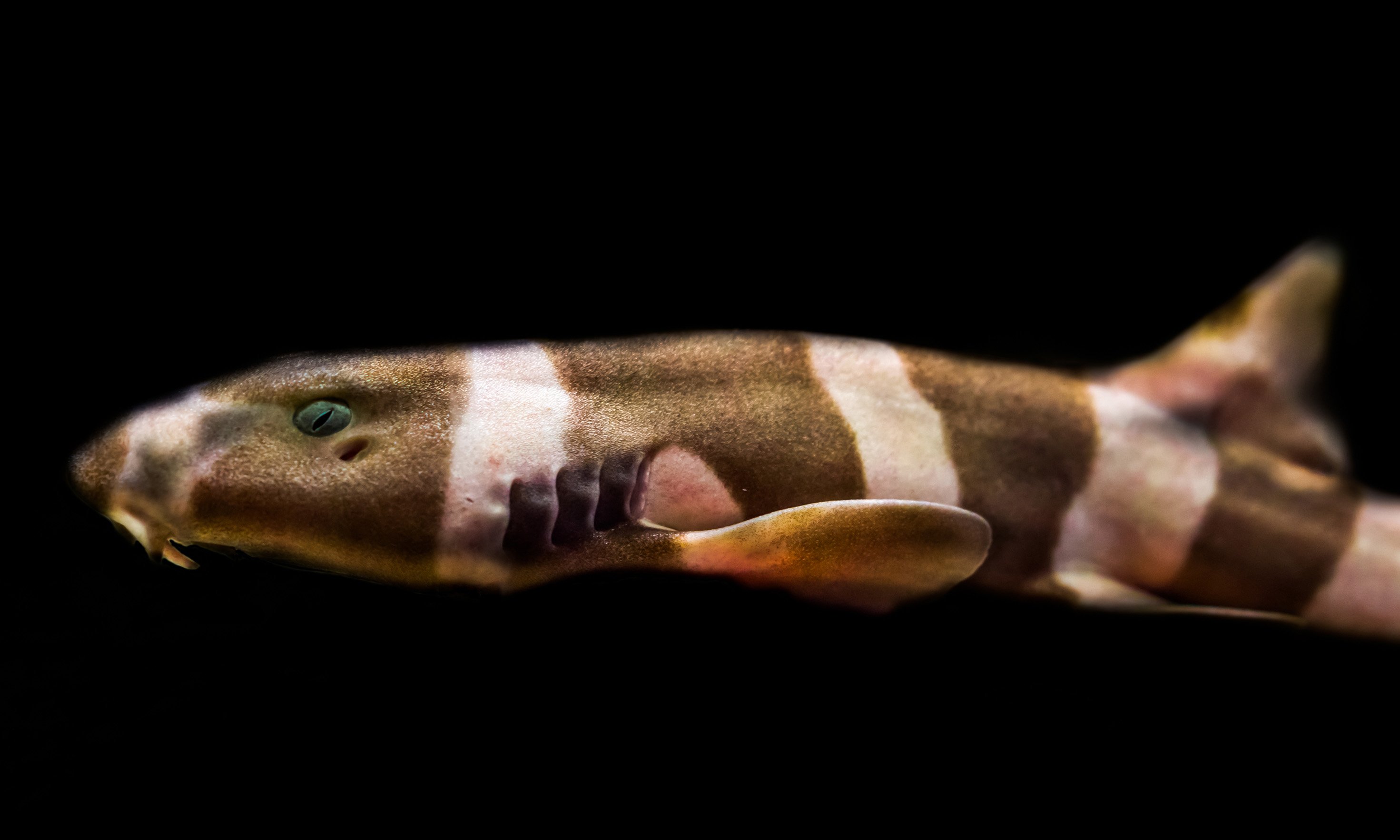 I’M OFTEN ASKED what my favourite species of shark is. I think most people expect me to say white sharks or tiger sharks.

Interestingly, very few people guess bull sharks. Out of the more notorious shark species, it seems that there is a lack of love for these sharks. However, funnily enough, they don’t top my list either.

Nothing against bull sharks; there are just others that I prefer. These are my top 10 Australian shark species…

This is always my go-to number one.

I love these animals. Crested hornsharks are similar in appearance to the more commonly known Port Jackson sharks. However, the ridge that runs across the top of their head, technically the supra-orbital crest, is much more pronounced on crested hornsharks.

The height, in addition to the contrasting dark brown-black colouration of the ridge compared to the rest of the golden-brown head, give these sharks a perpetual raised-eyebrows look of surprise.

Crested hornsharks, which grow to a maximum length of 130cm, have fins and gills, and all of the other features needed to be considered a true shark, but there are few other attributes of these lovable animals that would make you scream ‘shark!’ if you were to come across one.

I developed a personal affinity for these animals due to our shared lifelong battle with oversized eyebrows. Is this really a great reason for a scientist to pick a favourite species? Probably not, but with around 180 species of very cool sharks in Australia, picking a favourite can be difficult!

White sharks are quite a massive jump from crested hornsharks, but I have so much respect for these animals (and I believe everyone else should as well).

There are so many features of these animals that amaze me. To me, they are nature’s most perfectly designed predator. One of the things I like most about white sharks is how much we still have to learn about these animals.

I’ve had a bit of exposure to lemon sharks over the years, and they are great!

They are an extremely feisty species of shark, bordering on aggressive. They can also be very inquisitive.

What makes them even more endearing, if you will, is that they are essentially as much mouth as head.

Related: 7 “spooky” sharks and rays to learn about this Halloween

These yellow-brown whaler sharks, with a whiteish underbelly, can reach upwards of three metres. Juveniles, in particular, though, prefer shallow lagoons and mangrove swamps across northern Australia and are active during the day, making them a relatively common find in certain regions.

Grey nurse sharks are a bit of an Australian icon, although they often get a bit of a bad rap by the media when their photo is used as a proxy for white sharks.

While they may look big, bad and ugly with their gnarly, long, inward-curved teeth, far more often than not, they are just truly chill sharks.

Whenever possible, they prefer to hover pretty much motionless, letting water currents do all of the work for them in terms of getting enough oxygen over their gills for respiration. However, they are also capable of really rapid acceleration by ‘cracking’ their tails. They also have a lightning-fast jaw extension.

How could you not love these graceful, gentle giants?

They are exquisitely beautiful, completely harmless (except to plankton) and absolutely enormous! Whale sharks are the biggest fish in the oceans, yet, as with white sharks, there is so much that we don’t know about them.

I guess this is not completely surprising, given that they can migrate 20,000 km in a bit over two years. ‘Home’ for these sharks seems to be a bit of a blurred concept.

They are stunningly patterned, especially as juveniles, intriguing and continue to keep us guessing. It seems like every time a pattern regarding tiger shark behaviour and movement emerges, new information comes out showing contrasting behaviour.

They also appear to have immense cognitive ability, being able to map out and remember locations where they successfully found food over huge areas and extensive time periods.

There are reports of tiger sharks being very polite and placid in both captive and wild settings, but they can obviously also be very determined and aggressive.

Their unpredictability makes them one species to be extremely cautious around.

As juveniles, these unmissable sharks are darkly coloured with white stripes and spots. As they mature, they go through a dramatic change in body colouration, that results in a golden-brown body covered in loads of dark brown spots.

The colour and spot pattern of individual adult leopard sharks is as unique as our fingerprint, and can be used to identify animals long-term.

Hammerhead sharks are so bizarre, but simultaneously incredibly amazing.

My fondness for these animals comes purely from how excited I get when something in nature blows me away because it’s just so cool. Yet, every bit of the ‘strangeness’ in these sharks’ body plan has purpose.

Their enlarged cephalofoil (or ‘hammer’), which can be as much as half of their body length in the winghead shark, provides a suite of sensory advantages, allowing them to expertly locate and hone-in on even buried prey.

You can’t second-guess the power and creativity of nature when you see these sharks!

My love for cookiecutter sharks is kind of similar to that of hammerheads. But also kind of opposite. Despite their unusual appearance, hammerheads have managed to maintain an air of gracefulness.

Cookiecutter sharks, on the other hand, seem to be nature’s biggest accident that just happened to be awesome.

They have stumpy, round, luminescent bodies with too-small fins, and glowing green eyes. To eat, they glom onto an animal with their mouths, insert their teeth, then spin their little 50cm bodies around to remove a plug of flesh.

Admittedly, these sharks are incredible predators, being able to feed off of some of the oceans quickest and most powerful animals, like tuna, whales and pinnipeds.

I must admit, there is very little about these sharks that really makes them stand out. However, I spent five years of my life getting to know these animals really well through my postgraduate research, and then even more time working with them in an aquarium.

Brown-banded bamboo sharks taught me so much basic information about sharks, ecology and research in general.

So for that reason, they will always have a special place in my heart.

My favourite fun-fact about these animals comes from my PhD research, which found that they have fully functional vision around one month prior to birth