Home Blogs On This Day On this day: indigenous people get citizenship

On this day: indigenous people get citizenship

It was on this day, only in 1967, that indigenous people were formally recognised as Australian citizens.
By Elliot Brennan • November 7, 2013 • Reading Time: 2 Minutes • Print this page 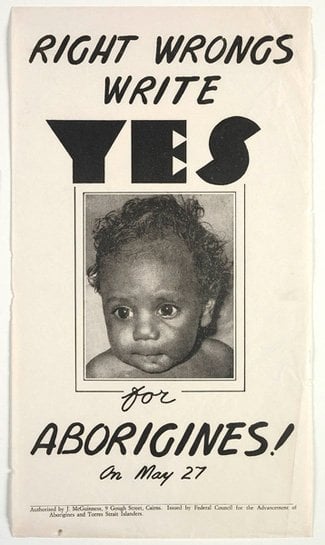 Aboriginal people were recognised as Australian citizens only in 1967. (Credit: State Library of New South Wales)

ON 27 MAY 1967, 90.77 per cent of Australians voted ‘yes’ in a constitutional referendum to improve indigenous rights and award citizenship to Aborigines and Torres Strait Islanders.

Until the referendum, every state had different laws for indigenous people, while the commonwealth constitution excluded them “in reckoning the numbers of the people of the Commonwealth”. Put simply, indigenous Australians were not citizens and had few, if any, rights.

In 1965, Charles Perkins and a group of students from Sydney University led a bus tour through indigenous communities in NSW. The media followed, exposing the segregation and dreadful living conditions in the communities. The campaign made headlines and was widely publicised. It was the first time most non-indigenous Australians had been exposed to the cruel realities of indigenous life.

At the same time, a petition for a referendum that had been circulating for nearly a decade surpassed a million signatures – a magic number for politics of the day, giving the parliament grounds to hold a referendum.

A referendum on indigenous rights was called for the 27 May 1967. It read as follows:

Do you approve the proposed law for the alteration of the Constitution entitled ‘An Act to alter the Constitution’ so as to omit certain words relating to the people of the Aboriginal race in any state so that Aboriginals are to be counted in reckoning the population?

Section 51, Part (xxv1): The Parliament shall, subject to this Constitution, have power to make laws for the peace, order, and good government of the Commonwealth with respect to:-
The people of any race, other than the aboriginal race in any state, for whom it is deemed necessary to make special laws

The referendum called on the omission of the two phrases (above, in bold) from the Constitution, thus granting indigenous Australians citizenship.

Gough Whitlam, opposition leader at the time, told Australians in a televised broadcast on the 16 May 1967 that “if Australia fails to write ‘Yes’ to the proposal on Aborigines, the rest of the world will believe that we have neither comprehension nor compassion”.

The constitutional referendum allowed the Australian government to devise laws to benefit indigenous Australians and was the building block for later victories in indigenous rights such as native title claims.

Prime Minister Harold Holt said, of the release of the results 29 May, “The grant of power to the commonwealth in relation to Aborigines, which follows from the vote, will enable it to play a useful part in ensuring justice and social acceptance for people of the Aboriginal race.”