The blue beauty with an impressive coat of fuzz

Bec Crew is a Sydney-based science communicator with a love for weird and wonderful animals. From strange behaviours and special adaptations to newly discovered species and the researchers who find them, her topics celebrate how alien yet relatable so many of the creatures that live amongst us can be.
By Bec Crew • April 30, 2018 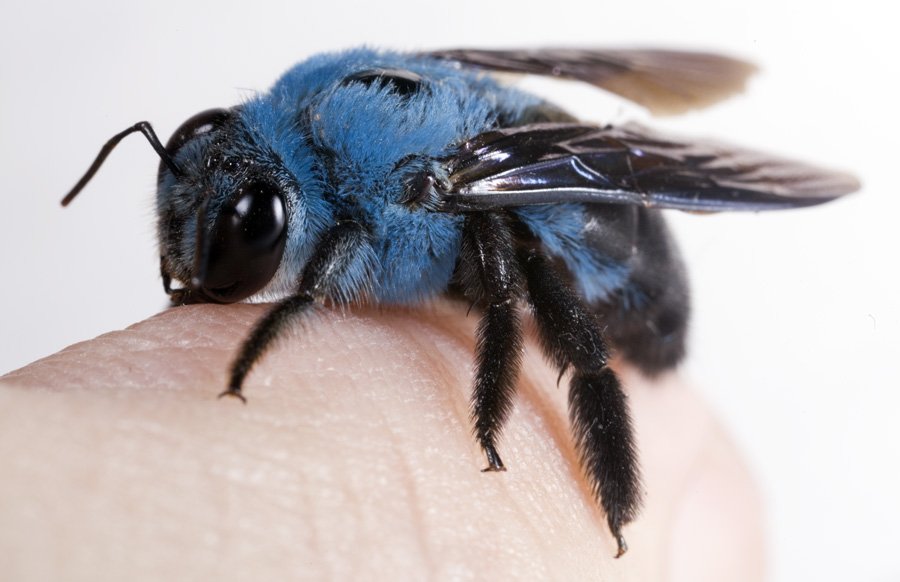 Reading Time: 2 Minutes • Print this page
We’re so used to seeing honey and bumble bees that you could be forgiven for assuming bees only came in yellow and black.

In reality, bees come in an array of colours, from green and ginger, to purple, white, and even pitch black.

But there’s something about that rich, bright cerulean that really sets the blue carpenter bee (Xylocopa caerulea) apart. Nature doesn’t often give us blue insects, so when it does, it’s hard not to be impressed.

The blue carpenter bee is found throughout Southeast Asia, India, and Southern China, and they’re known for being large and heavy bees that live solitary lives, and are generally non-aggressive.

While European honey bees (the most common species in Australia) grow to just 17 mm long, blue carpenter bees can reach a whopping 28 mm, which makes them appear eerily hefty.

We couldn’t find footage of a blue carpenter bee flying, but this violet carpenter bee (Xylocopa violacea) grows to about the same size:

Just look at that thing.

As with the legendary katipō, the blue carpenter bee is all about the females. It’s the females who sport that brilliant blue pubescence (yep that’s what the fuzz is called), and the females alone wield a stinger.

The males are stinger-less, and have a more subdued, brown or greenish fuzz.

Unlike honey bees, which build complex and intricate hives filled with tens of thousands of workers and a single queen, carpenter bees live alone, burrowing into trees to create a perfect little nest for themselves.

Sometimes queen bees will go so far as to share a common entry hole to their nest, preferring a ‘semi-solitary’ lifestyle to being on their own. Carpenter bees make honey just like their smaller counterparts, but it’s much thicker and denser than the honey we’re used to, like a peanut butter or cookie dough consistency.

The females mix this honey with pollen to create a ‘bee bread’, which they’ll deposit on the floor of a hollowed-out wooden chamber. On top of these delicious morsels, they’ll lay their eggs, and then seal everything up to form a brood cell that keeps their eggs safe and with enough food ready for when they hatch.

While blue carpenter bees aren’t found in Australia, we’ve got the shiny peacock carpenter bee (Xylocopa bombylans), which can be found from up in the Cape York Peninsula in north Queensland, then south along the eastern seaboard to the Sydney region.

We’ve also got green carpenter bees (Xylocopa aeratus), which are only found in isolated areas along the east coast of Australia and on Kangaroo Island – the last foothold in southern Australia.

If you’re lucky enough to spot one, here’s what they look like:

If that little fuzzy head poking out of that perfectly crafted nest opening isn’t the cutest thing you see all day, you’re having a cracking Monday.