While they’re usually known for their unique looks, not many people know about the ribbon eels bizarre mode of reproduction. 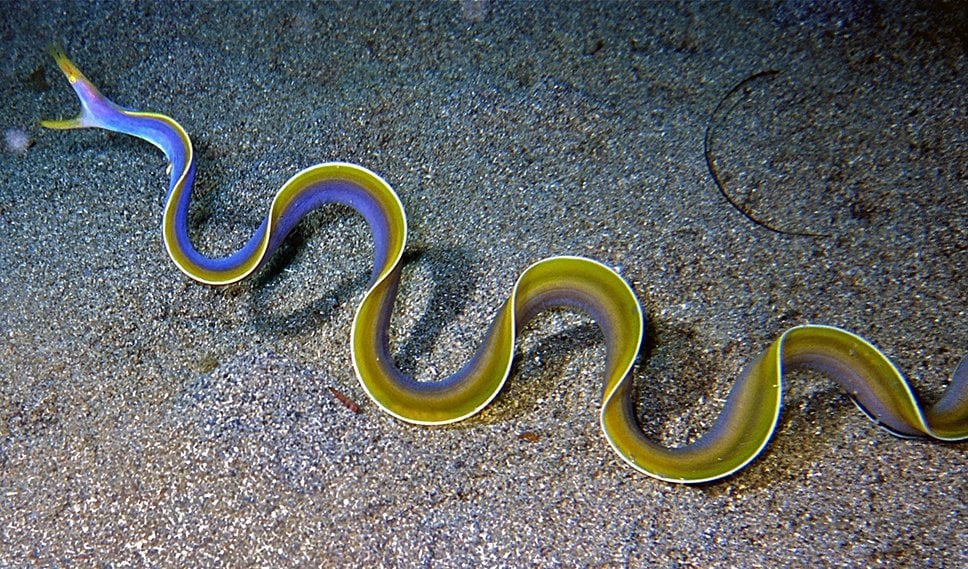 LET’S START BY stating the obvious – ribbon eels (Rhinomuraena quaesita) are one of the most beautiful and distinctive sea creatures on the planet, and the only species that could give a rhythmic gymnast a run for their money.

But it’s not all about that bright, rippling form, which is legitimately hard to stop staring at:

On top of their unique looks, ribbon eels also have a bizarre mode of reproduction, and scientists are still trying to figure out why they’re the only species of moray eel to undergo such extreme sex transitions.

From black to blue and gold

If you’ve ever Googled ribbon eels, you’ll be familiar with their glorious blue and yellow colouring. While this is by far the most commonly photographed form, it’s not the only one.

After hatching from their eggs, ribbon eels start to take on a black, velvety hue. This makes things very easy for divers and biologists, because if they spot a pitch black ribbon eel, they can immediately identify it as a juvenile: As they age, black ribbon eels develop golden bands of colour, and will eventually transition to the better known blue and yellow form. This colour combination is only found in males: And here’s where things get weird – the reason why the blue and yellow form is so frequently spotted by divers is because every single ribbon eel is born male by default.

Where are all the females?

If all ribbon eels were born female, we could call it a day, because as these amazing lizards have already shown us, you don’t need a male to successfully produce generation after generation of healthy babies.

But an all-male population? It can’t happen, so as male ribbon eels get older and larger, they start to develop female reproductive organs. Eventually, they become entirely female, which allows them to start laying eggs.

Like the juvenile and adult male forms, this new stage of life is also very easy to identify – the females lose the blue, and become all yellow: Ribbon eels are found in the warm lagoons and coastal reefs of the Indian and Pacific Oceans, with native populations off the coast of Australia, New Caledonia, Japan, East Africa and French Polynesia.

In Australia, they’re found near the offshore islands of Western Australia and the Great Barrier Reef.

If you’re a diver, you’ll very rarely see them swimming – ribbon eels spend most of their lives in tubes and burrows built into the seabed, poking their heads out to catch prey as it wanders past.

And the males are entirely unfazed about sharing a lair if need be.

Unlike most species, ribbon eels tend to live long lives in the wild – they often reach 20 years old if left to their own devices.

But in captivity, they only survive for a couple of years, with many in the pet trade dying after just one month in an aquarium or tank.

So we really should just leave them alone, and let them be celebrities in their own habitats, like this awesome ribbon eel, which has become famous just outside a resort in the Philippines: