A small, shy animal, whose main defence when threatened is to curl into a ball, the pangolin is an easy target for poachers. Image credit: Imagebroker/Alamy

CHRIS SHEPHERD FELT frustrated and furious when he heard of yet another attempt to launder wild-caught echidnas through Indonesia.

Transporting native Australian fauna overseas is tightly regulated but traders in Indonesia exploit loopholes in the legislation and these echidnas came with paperwork that described them as captive-bred. As director of the South-East Asian branch of wildlife trade monitoring network TRAFFIC, Chris suspected the paperwork was fake. He knew successful breeding of echidnas in captivity was almost unheard of and shared his concerns with conservation biologist Dr Phoebe Meagher and her Taronga Zoo colleagues.

“One of Chris’s biggest frustrations was that his team knew a lot of the poachers were forging documentation for echidnas that had been caught in the wild and putting them down as captive-bred,” Phoebe says. “I knew this couldn’t be right. Taronga, as a leading Australian wildlife and conservation group, has only been able to breed a handful of short-beaked echidnas, despite concerted effort and expertise.”

Since 1900, fewer than 50 captive-bred echidnas are known to have survived infancy. It was unlikely any private group had managed to breed the monotremes. Phoebe began searching for a scientific way to prove Chris’s suspicions that these animals had been unlawfully snatched from the wild. 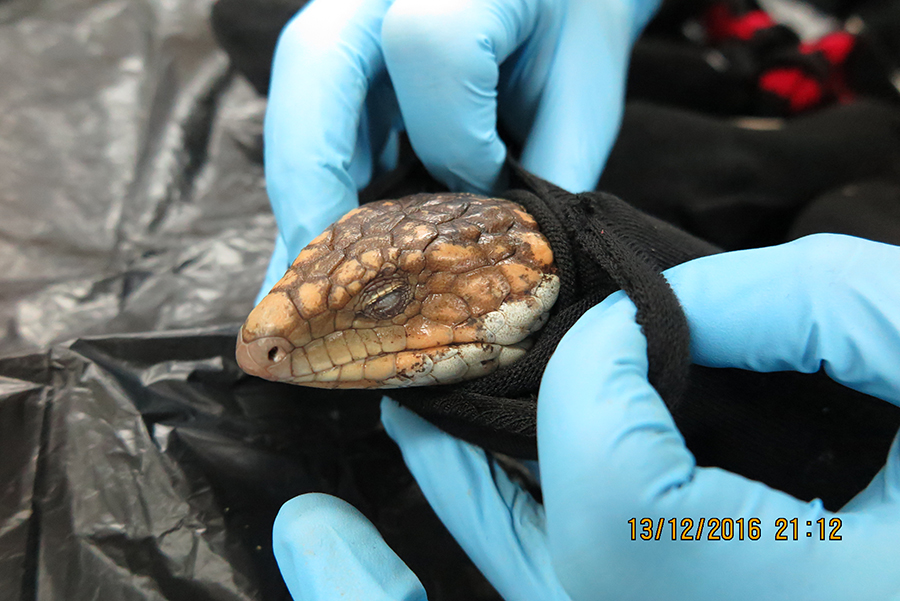 The lucrative illegal wildlife trade sees our prized native widlife smuggled in terrible conditions. This lizard, hidden in a sock and seized in WA, was fortunately caught before being taken out of the country, giving it a good chance of survival.  (Image Credit: Western Australia Department of Biodiversity.)

THE ILLEGAL WILDLIFE trade is a multi-billion-dollar industry worldwide and a huge threat to many endangered species, notably in Australia. Our birds and reptiles are particularly prized overseas for their uniqueness; a single black cockatoo, for example, can fetch upwards of $30,000. But, as punishments increase and regulations tighten, poachers and wildlife traffickers are becoming more devious. That many animals can legitimately be exported if captive-bred has only recently been exposed as a major legal loophole and given rise to the phenomenon of illegal wildlife laundering.

The team now leads the charge against the laundering of wild animals by using a combination of two complementary techniques – stable isotope analysis and X-ray nuclear fluorescence.  These identify permanent chemical signatures stored in keratin – a structural protein in human hair and nails that’s also in feathers, quills and fur. Because it retains a record of everything an animal eats, Phoebe and her colleagues hoped to use the chemical signature to differentiate between animals fed an artificial diet and treated water, and animals foraging in the wild.

They put their theory to the test using short-beaked echidnas, which are prized overseas as pets. By examining chemical signatures in echidna quills, they successfully established a difference between captive-bred and wild-caught animals. The work has resulted in a valuable forensic tool for identifying illegally traded wildlife and attracted the interest of not only TRAFFIC but the UN’s Convention on International Trade in Endangered Species (CITES) team. It puts Australia at the forefront of wildlife crime forensics. 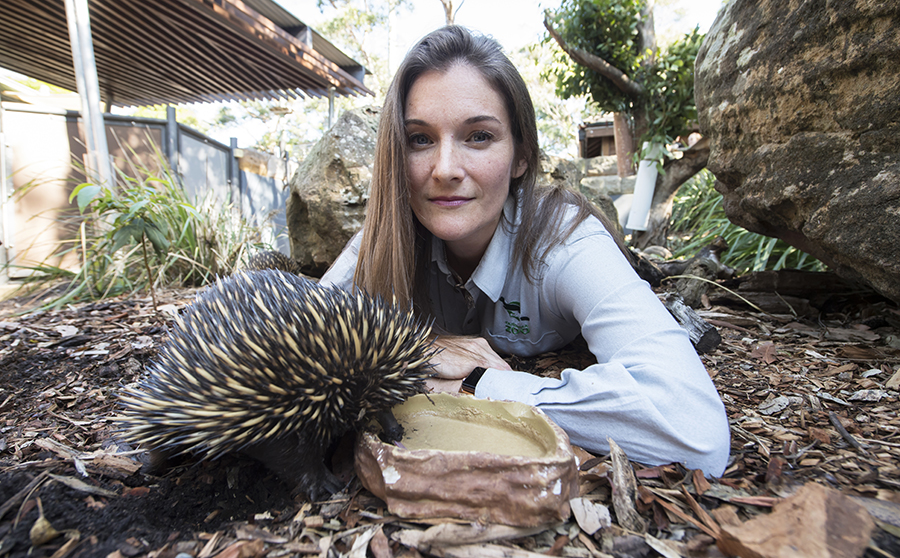 Wildlife nutritionist Michelle Shaw with one of the Taronga Zoo echidnas that provide samples to develop tests aimed at stopping the illegal trade of these animals. (Image Credit: James Morgan)

THE SUCCESS of this project, sponsored by the Australian Geographic Society, is expected to have positive implications for other illegal wildlife trade victims. Recently, the Taronga group has focused on the world’s most heavily trafficked mammal, the pangolin. A small, shy animal, whose main defence when threatened is to curl into a ball, the pangolin is an easy target for poachers. In Africa, its meat is a symbol of wealth and in Asia its scales are used in traditional medicines, although claimed therapeutic properties are unproven.

There are eight pangolin species, two of which – the Sunda and Chinese pangolin – are on the International Union for Conservation of Nature’s critically endangered list, but all face illegal trafficking threats. “Because the Asian pangolin is very hard to find and the African pangolin is doing slightly better, we get African pangolins being sold in Asia as Asian pangolins. When it’s just the scales, you can’t tell where they’re from, which is where stable isotope analysis comes in,” Phoebe explains. “We want to know what trade routes are being used by poachers.”

Stable isotope analysis is now being applied to wildlife conservation in other ways, too. Last year, Save Vietnam’s Wildlife, one of many organisations dedicated to protecting species worldwide, rescued 400 pangolins from poachers. “And that’s just the ones lucky enough to be found alive before they were taken from their home country,” Michelle says.

From such large-scale rescues, challenges have begun to surface. An organisation saving 400 pangolins, for example, has to be able to feed every one of those animals and it can cost $50,000 a year just to buy ant eggs for them to eat. This will keep the animals alive, but doesn’t compare with the diverse diet they have in the wild.

Michelle says learning more about these animals’ diets through stable isotope analysis is helping develop more nutritious feed for zoo animals. “Live pangolins are sold by the kilo so traders pump their stomachs with a corn gruel that’s like cement,” she says. “It’s not nutritious at all; it’s just to make them heavier. It stretches their stomachs and causes serious health issues. When it  finally passes through their digestive system they’re left malnourished, with their stomachs in a horrible condition. Making them a feed that won’t aggravate them while in that compromised state is critical to their care and rehabilitation.” Stable isotope analysis is being used as part of in-depth research into the diets of wild animals and may – as a result – improve how zoo animals are fed globally.

Lydia and Phoebe have also spent time exploring how the techniques they are developing can be rolled out in places like Cambodia, Vietnam and Indonesia, hotspots for the illegal wildlife trade. Lydia, a veterinarian by training, developed an interest in veterinary forensics when diagnosing abuse in animals for organisations such as the RSPCA. And Phoebe has completed extensive fieldwork in the conservation of Australia’s most critically endangered animals.

“We’re focused on the enforcement outcome through a thorough roll-out,” Lydia says. “We intend taking samples from animals at key bottlenecks and collection points. These will be sent to our world-class facilities. The tests are very cheap, quick and considerably more effective than testing DNA. Each stable isotope test is only $10. Those involved in the wildlife trade will have to have stocks certified.” 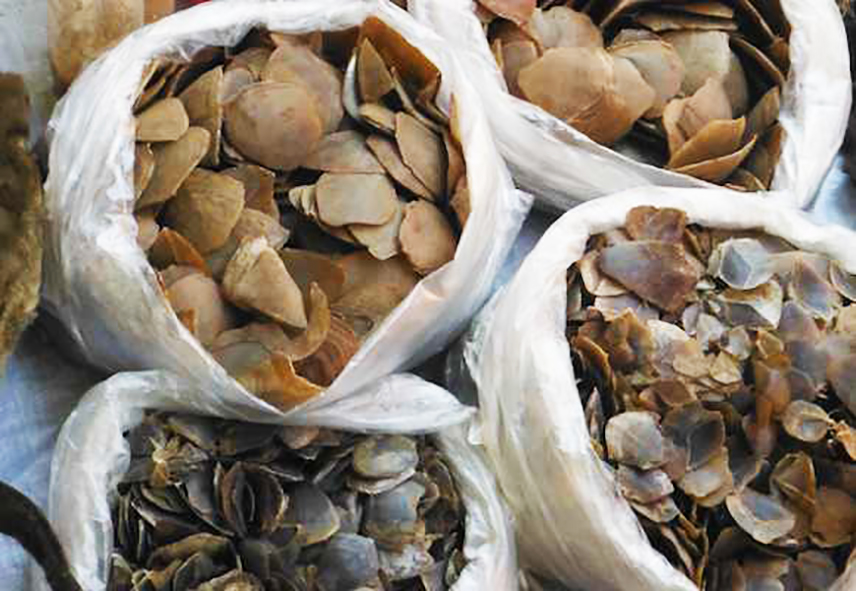 The mistaken belief by practitioners of traditional Chinese medicine that pangolin scales cure cancer, malaria and other ailments sees wholesale slaughter of the animals and removal of their scales, which are made of mainly keratin, the same substance that makes up our fingernails and hair. (Image Credit: Chris Shepherd/TRAFFIC)

THE TARONGA TEAM’S next mission is to end the illegal trafficking of exotic birds, starting with cockatoos in a project called Beyond Borders. Rather than looking at captive versus wild, the project hopes to identify where trafficked cockatoos have come from. Determining geographical origin by using feathers will help authorities identify where to focus their efforts, which would have a global impact on this illegal trade, Lydia says. Cockatoos are the most highly laundered animals from Australia and the Asia-Pacific region. Cruelly smuggled inside water bottles and small cages, they often perish before they even arrive at a buyer’s destination. Trafficking has been fuelled by skyrocketing demand in the past decade for our exotic birds. “Social media is a new platform that can unwittingly glamorise the keeping of exotic pets, particularly birds, which may have been illegally or unethically traded,” Lydia says. “It’s easy to post one cute photo that hides all of this in the background. The owner may not have any idea either.”

Recently, Instagram has begun cracking down on ways the illegal wildlife trade and animal cruelty have seeped onto its platform. Its policies already prohibit animal abuse and the sale of endangered animals, and it has recently added a new content advisory when users search a hashtag associated with wildlife exploitation. This is important, Lydia says, because we all have a part to play in ending the illegal wildlife trade.

“Publicity around the enormous conservation and welfare issues of the illegal wildlife trade is necessary to change people’s way of thinking,” she says. “Even as a person working in this field, it took work to educate myself to find out how bad it really is. We all need to talk about it as much as possible.”