Home Topics Science & Environment How did the iconic boab tree get to Australia?

How did the iconic boab tree get to Australia? 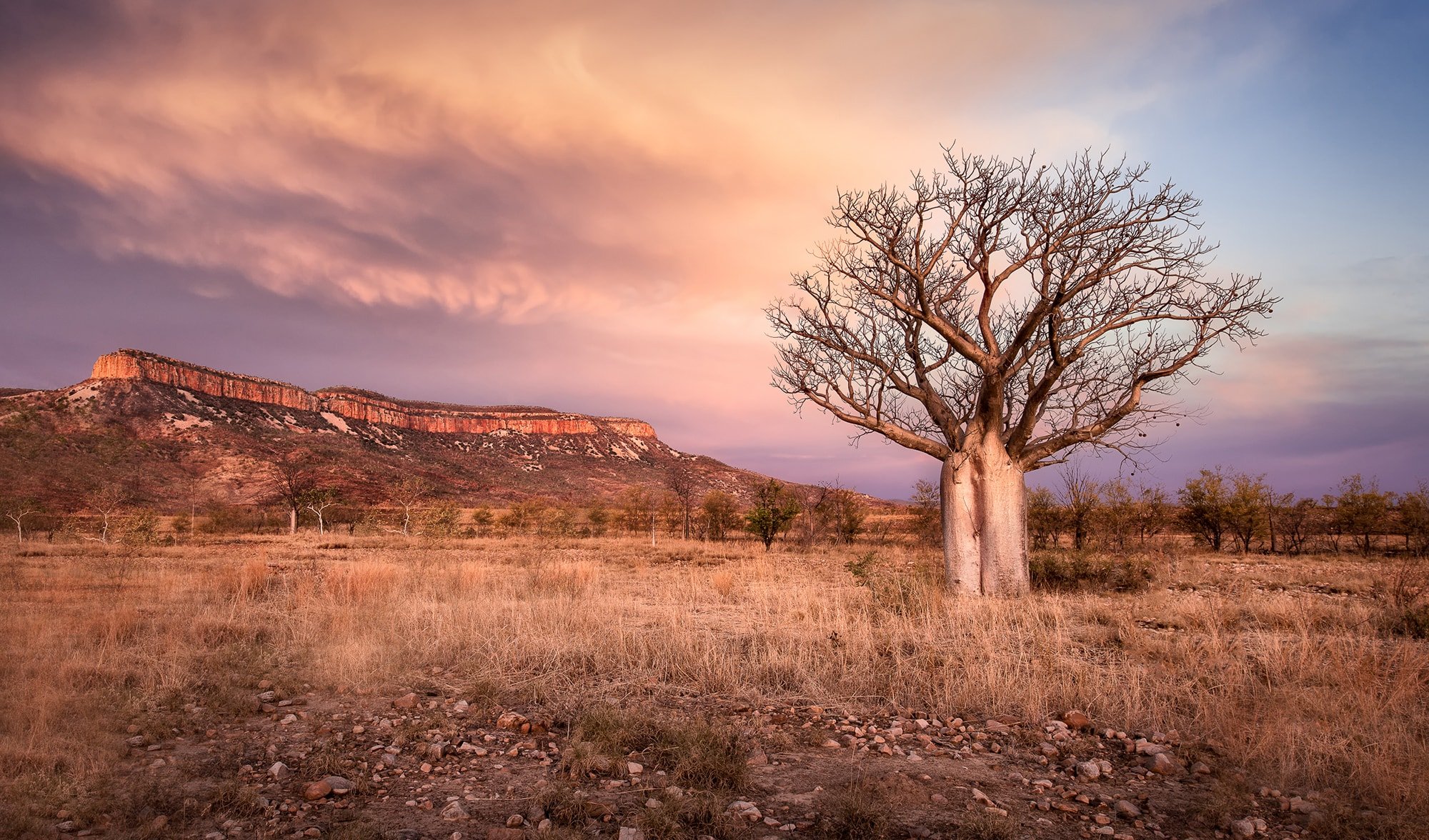 Well adapted to seasonal droughts, the boab stores moisture in the fibrous pith of its swollen trunk and branches. This stunning specimen is located near the Cockburn Range in the East Kimberley. Image credit: Leah Kennedy/Shutterstock
Reading Time: 6 Minutes • Print this page
We investigate the origins of Western Australia’s iconic boab tree, whose only living relatives survives far away in Africa.

AUSTRALIA ISN’T KNOWN for its deciduous trees. Across vast swathes of forest on other continents, the annual cycle of shedding and regrowth is ubiquitous.

Each year, as days shorten and  temperatures drop, leaves fall. Trees shut down for winter, biding their time before embarking on a huge spring growth spurt. But in Australia’s highly variable boom-bust climatic conditions, the evolutionary path to deciduousness was never really an option.

Putting on leaves in response to seasonal change, only to have that foliage wither prematurely during tough times, is biologically wasteful.

Unable to rely on predictable seasonal cycles, our trees have become opportunists, waiting out dry spells by tapping groundwater, their permanent leaf canopy always at the ready in case rain does come. The omnipresent eucalypts are a perfect example of Australia’s ascendant evergreens.

Although evergreens are ecologically triumphant here, Australia is home to a small number of native deciduous tree species.

All but one are restricted to tropical or subtropical environments; the outlier is the deciduous beech of Tasmania’s cool-temperate mountains, a glorious autumnal relic of the supercontinent of Gondwana.

Australia’s other deciduous trees lose some or all of their leaves not in readiness for the winter cold, but to best survive the northern dry season. Species include the red cedar and that spectacular red-flowered endemic the Illawarra flame tree.

The red cedar is also found in Asia, and Australia serves as the regional genetic hotspot of the Illawarra flame genus, Brachychiton.

But there is one remarkable Australian deciduous tree that doesn’t have a single native sibling, nor any presence elsewhere in our region. That total loner is the unmistakable boab of Western Australia’s Kimberley region. The boab tree, an icon of the Kimberley

In 1820, on first encountering a boab, explorer Phillip Parker King was struck by the “gouty habit of the stem, which was soft and spongy [and] gave it an appearance of disease”.

Living for many hundreds of years, this strange tree seems touched by the bizarre. Its often grotesquely swollen, silvery trunk sprouts writhing and wasted branches that lack foliage for much of the year. These, in turn, bear large, fragrant, creamy flowers that appear at night just before the start of the wet season.

Hawk moths are the flowers’ usual pollinators, but, where boabs grow near watercourses, black flying-foxes also get in on the act.

A crop of pendulous ovoid fruits duly appears after flowering. Covered in velvety brown fuzz, the brittle shell of the boab fruit encases a storehouse of seeds embedded in a mealy pulp.

Both the pulp and seeds were once important foods for Aboriginal people. The roots of seedlings and the tree’s young leaves are also edible, while adult tree roots can be made into string.

The boab isn’t particularly fussy about the soil in which it grows; it dots sandstone hillsides and sandy plains, basalt slopes and the sharp limestone ridges that arc across the southern Kimberley. In the semi-arid western and eastern Kimberley, it stands in isolation or in small, family-like copses beside creeks and lagoons.

Found from sea level to elevations of about 300m, the boab’s range extends to the Victoria and Fitzmaurice rivers in the Northern Territory, but no further east.

With its unique appearance and restricted range, the boab is the botanical symbol of the Kimberley, and the Kimberley alone.

The common name ‘boab’ might reasonably be assumed to be of Aboriginal origin, but it’s actually a corruption of ‘baobab’, an Arabic word of African origin that means ‘father of many seeds’.

It’s a clue to the tree’s evolutionary associations because the boab and baobabs belong to the same genus. Of the eight baobab species, two are found on the African mainland and the others inhabit the African island of Madagascar, the unrivalled botanical epicentre for the genus. Boabs are sometimes found in small, family-like copses. The dimpled grey bark and distended habit of the trunk give this WA tree a vaguely elephantine look – an enigmatic echo of its African connections.

How did they get here?

So how does a species whose only living relatives lie nearly 10,000km away on the other side of the Indian Ocean end up in an isolated corner of the Australian continent? The origin of WA’s boab is one of modern botany’s great conundrums.

Professor Emeritus Jack Pettigrew (a neuroscientist at the University of Queensland) and Professor David Baum (a botanist at the University of Wisconsin-Madison, USA) have spent many years studying the boab and its relatives, but their explanations of the boab’s origins are as distant from one another as the opposite shores of a metaphorical Indian Ocean.

One thing on which they agree is that the boab isn’t a Gondwanan remnant like the deciduous beech.

The break-up of the supercontinent saw Australia, Africa and Madagascar detach from each other more than 120 million years ago (mya).

Genetic analysis of the species on both sides of the Indian Ocean shows they’re still too closely related for the boab to have been isolated for as long as that.

What the two scientists disagree on is the manner and timing of the arrival of the boab’s ancestors on Australia’s shores.

David concedes there’s still much to learn about the evolutionary relationships among the baobabs and boab, but his research suggests the genus Adansonia, to which all these trees belong, split sometime between 2 and 15mya.

By then, continental drift had carried Australia close to its current geographical location, which came with an extensive tropical zone suitable for baobabs.

David suspects the boab and its African relatives evolved from a now-extinct common ancestor that grew somewhere in Asia, perhaps in areas long ago inundated by rising seas.

Wherever they once grew, the trees’ pulpy flesh would be unlikely to yield fossils. But, David explains, the “big hope” is that fossilised seeds, seedpods or even pollen might one day be found and provide a clue to the boab’s ancestry.

David is also open to the possibility that the boab’s antecedents floated to Australia.

Oceanic drift is a common means of plant dispersal and African baobab seedpods have travelled as far as the Indian Ocean island of Aldabra, and can remain viable after being immersed in sea water for as long as six months.

Could they make it all the way to Australia? Ancient tsunamis are known to have battered East Africa and Madagascar, and massive floating islands of debris generated by these events might have afforded protection to seedpods or even viable plants.

Jack Pettigrew believes the boab seedpod is just too fragile to withstand a long sea journey. If any pods floated free, they would have become waterlogged, he explains.

His theory of how the boab came to be in Australia stems from his analysis of leaf samples from 220 trees scattered across the Kimberley.

The results have led him to propose that the Australian species is startlingly young – a mere 72,000 years old – and that its DNA has undergone a rate of mutation 18 times greater than that of its African relatives. 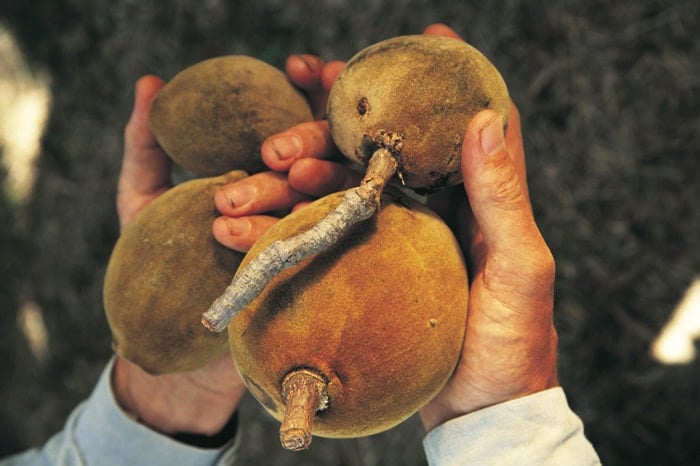 Fresh boab shoots appear in the wet season and are valued by Aboriginal people as bush tucker. The tree’s gourd-like woody fruits range up to 25 cm in length and 20 cm in diametre.(Image credit: Bill Bachman/Australian Geographic)

Jack believes there’s a very good chance humans introduced the boab to Australia and that people moving out of Africa carried the tree’s seeds as a valuable food source.

“If you were a migrant, and you thought, ‘What will I put in my pocket?’, it would probably be baobab seeds,” he says.

Extending even further out onto a speculative limb, Jack theorises that early migrants out of Africa may not have travelled overland, but ventured to Australia by sea.

With sea levels 70,000 years ago being up to 150m lower than they are today, “there were many islands and seamounts in the Indian Ocean that we just can’t see now”, he says.

For this energetic and inquisitive retired neuroscientist, the final clue in the riddle of the boab lies in the Kimberley’s exquisite rock paintings.

What appear to be boab trees are occasionally seen in this ancient art, and Jack deduces a “reverence” and a sense that the artists “might not have survived without the boab”.

He also cites similarities between the Kimberley art works and those of East Africa in support of his overarching thesis. But it seems that until fossilised remains are found that can decode the origins of Australia’s baobab, this Kimberley icon will remain shrouded in an enigmatic allure as distinctive as its striking form and bare-branched silhouette.

This article was originally published in Issue 150 of Australian Geographic. Purchase your copy here.