The fight to restore Lake Pedder 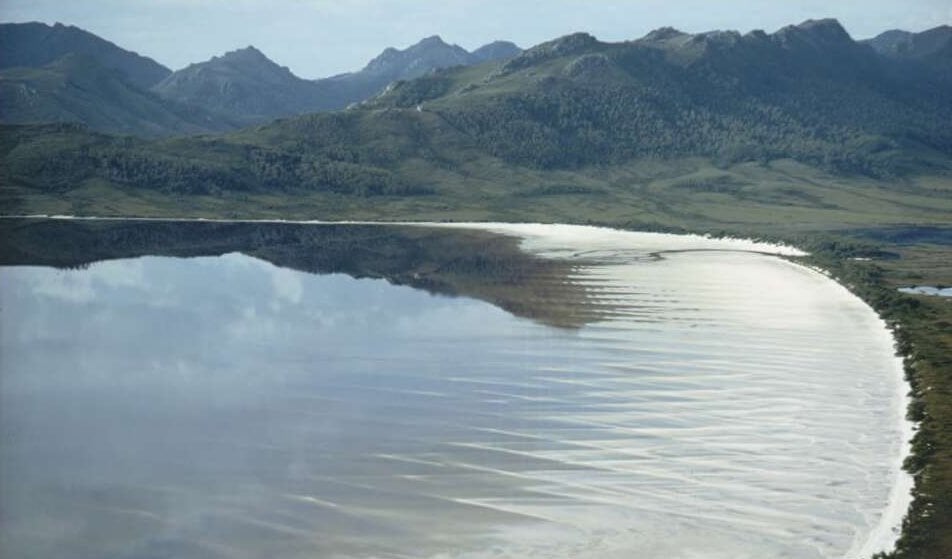 Sand waves in the shallows of Lake Pedder with a view to the plains around Maria Lake, Tasmania, 1968. Image credit: Olegas Truchanas
Reading Time: 2 Minutes • Print this page
Defenders of Lake Pedder, which was inundated in 1972, are aiming to submit an Ecological Management Plan to restore the ancient lake by 2021.

AS THE 50th anniversary of Lake Pedder’s inundation nears, environmentalists  have begun a new campaign to restore it.

Lake Pedder was formed from glacial debris 10,000 years ago during the last ice age and was known for its iconic white quartzite beach.

In 1967, its status as a national park was revoked and in 1972 Tasmania’s Hydro-Electric Commission, later renamed Hydro Tasmania, flooded the lake and created three new dams.

The inundation of Lake Pedder was a major loss to environmentalists, including Greens MPs Bob Brown and Christine Milne.

Milne is the convenor of the Lake Pedder Restoration Committee, the main drivers behind the new campaign.

Over the years, there have been a number of attempts to restore Pedder, but Milne is adamant that this time is different, because debates around energy security are different.

“Back in the early days of restoration talks, people were easily convinced that the lights would go out,” she says. “Now we’re hooked up to the mainland and there’s an abundance of renewable energy.”

According to Milne, the biggest question for those against the restoration is regarding the forgone revenue for hydro to restore Lake Pedder. She says getting support from the Tasmanian Government will also be a challenge as they receive a dividend from that revenue.

But for Milne, restoring Lake Pedder before the summer of 2021-’22 is symbolic. “The lake is a symbol of ecological restoration,” she says.

“We not only have to protect what we have but we have to go back and restore degraded ecosystems as well. It’s not either or.

“The newest report from the United Nations Intergovernmental Panel on Climate Change makes it clear that we can’t constrain global warming to two degrees unless we build resilience in ecosystems.”

Can Lake Pedder be restored?

Anita worked for Hydro Tasmania for 10 years assessing the impacts of altered river flows resulting from the Basslink Cable connection. She conducted research in the Gordon, Franklin and Denison rivers.

“What I observed over this time was that once the conditions were right, the vegetation had amazing resilience and there was rapid recovery once the factors stopping plant establishment were removed and seeds from nearby areas established.”

Anita admits recovery along a river bank is a different scale to Lake Pedder, but restoration projects in Europe and dam removal in the USA have convinced her it’s possible.

“I personally think hydro-power has an important role to play in energy provision, but we have to ask ‘at what cost?’.

“For me, drowning an ancient, unique glacial lake and impounding areas of a national park, is too high a price to pay.”

Bob Brown (fourth from left) at a Lake Pedder protest in April 1979, on the occasion of the official opening of the Middle Gordon Power Scheme. Support Bob's ongoing work by becoming a Bob Brown Foundation member here: https://t.co/YjAy5IbtIZ#bobbrownfoundation #actionforearth pic.twitter.com/Fx3oWFlWxw

The Lake Pedder Restoration Committee plans to have an Ecological Management Plan to restore the original Lake Pedder and surrounding ecosystems prepared for governments by 2021.

To do that requires three critical steps:

“The Lake Pedder Restoration Committee is committed to getting the agreement of Government to a restored Lake Pedder,” says Anita. “International examples show us that dam removal and restoration of the ecosystem is possible.”

If successful, the restoration of Lake Pedder will coincide with the UN Decade on Ecosystem Restoration, which begins in 2021.