Home Topics Science & Environment Fruits of the sea: the maypal of Arnhem Land

Fruits of the sea: the maypal of Arnhem Land

To the people of Arnhem Land, shellfish and other sea creatures nourish a link to country and culture.
By David Hancock • July 31, 2018 • Reading Time: 3 Minutes • Print this page WHEN THE Yolngu of north-eastern Arnhem Land look to the sea, they know the season from the direction and feel of the wind. One thing the wind communicates, they say, is when certain maypal are plump and ready to be gathered.

The term maypal covers many marine and some terrestrial creatures that have sustained generations of Yolngu for millennia. In one sense it means shellfish. But maypal include foods non-Indigenous Australians might not consider to be in that category, such as land snails, marine worms and insect larvae, including witchetty grubs. Maypal are fundamental to Yolngu culture. They are tasty and easy to harvest; just go down to the beach or among the mangroves. And they sustain coastal people not only physically, but also spiritually and emotionally.

Huge middens of shells along Australia’s northern coastline attest to the popularity of maypal: in some areas middens more than 30m high date back many thousands of years. 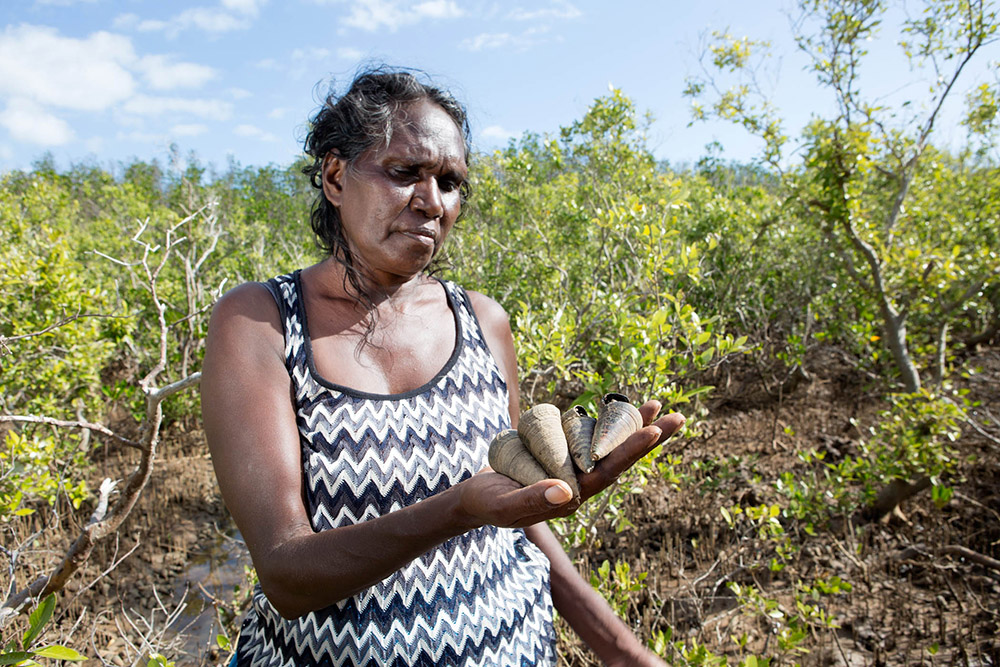 “In the north of Australia, we have an incredibly varied, rich and complex coastline, with a large number of ecological zones,” says Dr Bentley James, a Northern Territory anthropologist and linguist who lived in Arnhem Land for many years. “There are more than 1500km of coastline on the mainland and another 1750km on the islands, not to mention all the reefs and sand bars.”

He says the Yolngu recognise 15 ecological zones inhabited by 110 species of maypal. These are described by about 350 different Yolngu names with complex layers of kinship and connectedness entailing a highly sophisticated view of the natural world. Most maypal have multiple names in different clan languages and are celebrated in songs and traditional lore.

So-called increase rituals practised by the many coastal clans ensure the fecundity of maypal, enhancing their fatness and abundance in the coming season. According to Yolngu woman Doris Yethun Burarrwanga from Elcho Island, maypal provide balanced nutrition and “everything a young person needs to grow… That is why children in coastal homeland centres have the best teeth in the country and infinitely better health outcomes in the long term.”

These kinds of shellfish and other invertebrate sources of protein are much loved by the local people, she says. “We sing for them. We care for them… We eat them and celebrate them and, in return, they give us life.”

Doris says maypal are a crucial part of life by the sea for Aboriginal kids, not just as a supplement to their diet, but also because they provide “a spiritual link and a physical and nutritious reconnection with country and kin”. 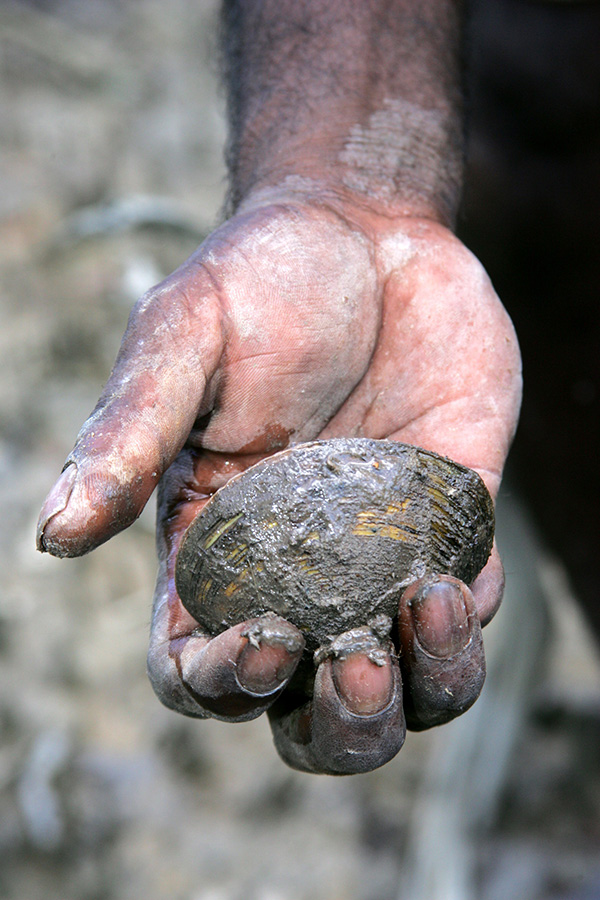 A Yolngu man plucks a mud mussel, sort-after food known as dhan’pala, from the substrate around the roots of mangroves in the interdial zone in northern Australia. (Image Credit: David Hancock)

Bentley recently collaborated with Yolngu people to compile a bilingual identification guide to maypal. The knowledge was collected from conversations with traditional owners over many years. During the process, “we had to find the maypal, catch them, cook them, eat them and name them”, he says. “It was a great joy involving families from so many places.”

The process of publishing the book was consistent with the Yolngu way and lore, Bentley notes. More than 500 people across seven language groups were involved, ranging from toddlers to nonagenarians. The book will be distributed to schools in Arnhem Land and among eight ranger programs and eventually be given to libraries across Australia.

It offers local children “an opportunity to know the full spectrum of rare names and ecological knowledge of shellfish, hitherto kept safe by a tiny population”, Bentley says. “This knowledge stretches over thousands of years from one side of Arnhem Land to the other – from the eastern sunrise over Blue Mud Bay to sunset west of the Crocodile Islands.”

The book is a gift to future generations, he adds, “to help children walk in the footsteps of the ancestors”.

David Hancock is the author of Kuwarddewardde: The Stone Country, in which he lovingly documents the Arnhem Land Plateau, an ancient sandstone tableland riven by gullies and waterfalls.