Home Topics Science & Environment What lies beneath Antarctica’s ice? Lakes, life and the grandest of canyons

What lies beneath Antarctica’s ice? Lakes, life and the grandest of canyons 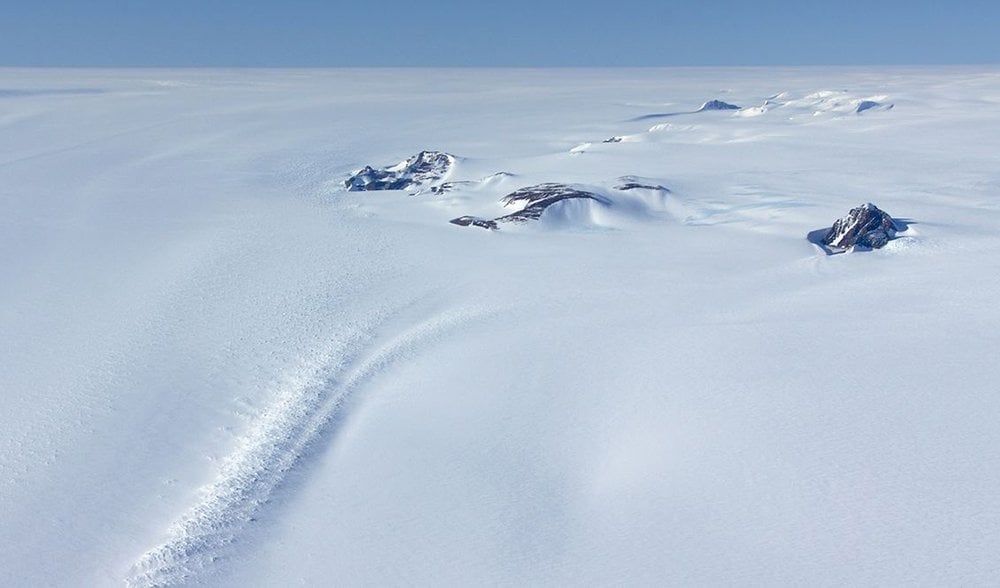 What lies beneath: bedrock peeks through the Antarctic ice. Image credit: Russ Hepburn, Kenn Borek Air, Author provided
Reading Time: 4 Minutes • Print this page
Buried beneath kilometres-thick slabs of ice are rivers and huge lakes – some of which are teeming with microbes that thrive in a world without light or oxygen.

THERE ARE FEW frontiers in the world that can still be said to be unexplored. One of these terra incognita is the land beneath Antarctica’s ice sheets. Buried under kilometres of ice is a fascinating realm of canyons, waterways and lakes, which is only now being mapped in detail.

There are more than 400 known lakes in this harsh environment, and more are being discovered as technology advances. This water beneath the ice lubricates the interface between the ice sheet and its rocky bed, and thus controls the flow and behaviour of the ice itself.

Under such a large volume of ice, how is it possible for water to exist at all without freezing? The answer is pressure: when a large weight of ice is pushed onto water, it can stay liquid at temperatures well below the normal freezing point. What’s more, the large body of ice actually insulates the bed and protects it from the very cold air temperatures above.

The liquid water is created by heat from the Earth’s interior and from the friction generated as ice flows over the bedrock, which can melt the underside of the ice sheet. It is this water that flows into the subglacial lake basins and eventually into the ocean. A tour around this subglacial landscape would take you first to the largest lake under the ice: Lake Vostok. At 12,500 square kilometres and with an average depth of 430 metres, Lake Vostok is the world’s sixth-largest lake by volume, but as it lies beneath some 3.5km of ice, it’s not easy to visit. You can’t see it, but it’s there: Lake Vostok’s location in East Antarctica. (Source: NASA)

Using ice-penetrating radar and seismic techniques, scientists have mapped Lake Vostok to understand its origins. They have found that it may be up to 15 million years old. The lake has circulation patterns driven by freezing and thawing of the overlying ice, and even has small lunar tides.

Lake Vostok was discovered decades ago, but what is thought to be the second-largest lake under the ice sheet was first observed only this year. It is in Princess Elizabeth Land, East Antarctica, known as the “last pole of ignorance” because until recently it was virtually unmapped.

This region is also home to a huge canyon system, which extends all the way from the ice sheet interior to the coast. The system is as deep as the Grand Canyon but 100km longer. So far our tour has focused on the central regions of Antarctica, where ice and water are relatively stable. In contrast, at the ice sheet’s dynamic edges near the coast we find fast-flowing regions called ice streams. Many of these have subglacial lakes in their catchments.

Tens to hundreds of kilometres in length, these lakes are short-lived, growing and draining over a period of just a few years. Evidence of this drainage process comes from satellite measurements of the height of the ice sheet. The surface can be seen to rise and fall, as the lake swells and then ebbs away again.

So far, at least 130 of these “active” lakes have been discovered. More are being found every year.

One example is Lake Whillans, in West Antarctica. Covering about 60 square km, it’s small in comparison with the gigantic Lake Vostok, but is by no means insignificant. In January 2013, a US research expedition drilled into the lake, extracting clean samples that were later found to contain microbial life.

Such life thrives in this harsh environment without sunlight for photosynthesis. Instead, the microbes depend on the oxidation of methane and ammonia, derived from sediments that are hundreds of thousands of years old. This momentous discovery of life in such a harsh and unforgiving environment may provide scientists with critical information on the development of marine life cycles. The water beneath the ice creates a mysterious and fascinating subglacial world, but it is also important because it lubricates the bed of the ice sheet and controls how fast the ice can flow. Where there is sediment under the ice, liquid water can make the ground unstable, while in other areas high pressure allows the ice to float on a pillow of liquid water. In both cases this reduces the friction at the base, allowing the ice to flow faster.

As scientists, we want to predict how the ice sheet will react to a warming climate. To do that, it is essential to pin down the role of water in the current flow rates of Antarctic ice. These fascinating lake and canyon features are therefore not only intriguing, but also play a crucial part in the future of the icy continent.