What can we expect Australia’s next volcanic eruption to be like? That depends where and when it happens, and it could be sooner than you think.
By Jozua van Otterloo • May 25, 2016 • Reading Time: 5 Minutes • Print this page 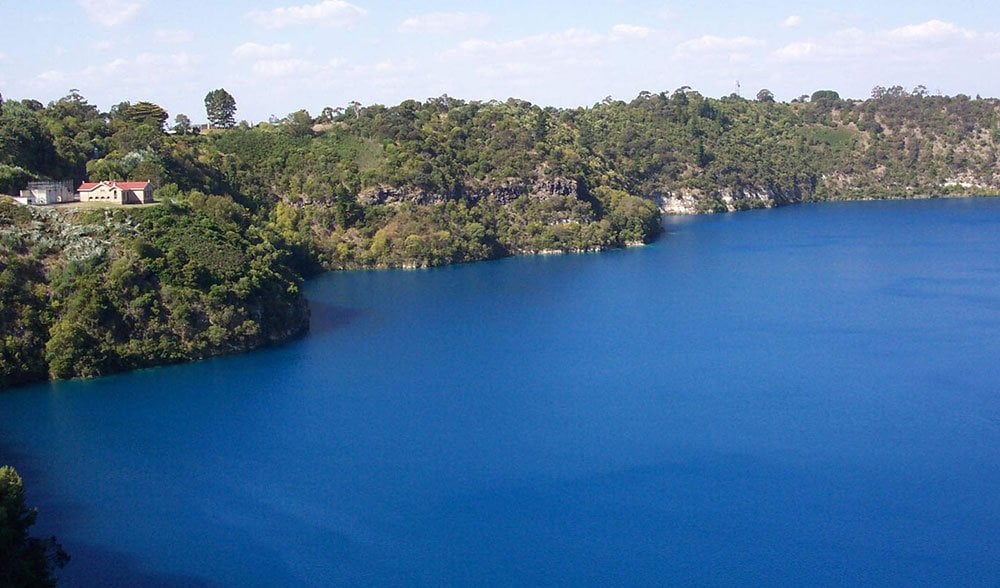 The incredible Blue Lake at Mount Gambier fills one of the craters from the last volcanic eruption just 5000 years ago. Image credit: Wikimedia

AUSTRALIA IS AN old and stable continent with not many geological risks such as major earthquakes and volcanic eruptions. At least that is what most people think.

But throughout its geological history Australia has known volcanic activity right up to the time that humans lived here. The most recent eruptions on the Australian mainland occurred at Mt Gambier and Mt Schank in South Australia about 5000 years ago.

These volcanoes are part of a larger volcanic area or province in south-eastern Australia, where we can still expect another eruption. What will such an eruption look like and where will it happen? Researchers from Monash University have looked at a few of the more recent volcanoes in the Newer Volcanics Province to work out what happened and what we can expect in the future.

This volcanic province stretches more than 400km from the Melbourne CBD in the east to Mount Gambier in the west. More than 400 volcanoes have been identified in this area.

The majority of these produced extensive lava flows, especially in the Western Plains district of Victoria. But many volcanoes were also explosive, ranging from beautiful fire fountains like those seen in Hawaii to very explosive ash-cloud-forming eruptions. Many of the younger volcanoes in Victoria and South Australia are maar volcanoes. Maar volcanoes are craters with low rims around them and are formed by intensely explosive interaction between magma (mixture of molten rock, crystals and gases) and groundwater.

These large maars are more than 3km wide, whereas normally maars are only up to 500m in diameter. The size of these maars is actually the result of eruption from multiple vents that merged into a larger maar crater.

Volcanic eruptions can be in various forms or styles. Mildly explosive styles are the Hawaiian-style fire fountains and the Strombolian-style spraying, as it happens on the Mediterranean island of Stromboli.

When eruptions become more explosive they turn to Plinian, named after Pliny the Younger who described the 79AD eruption of Vesuvius that destroyed Pompeii.

Plinian eruptions develop tall eruption columns with umbrella clouds that last for many days to weeks.

But if the intense explosions occur more like bursts, then they are Vulcanian, with a smaller eruption column that can disappear with the wind within a few hours.

When the cloud of a Plinian or Vulcanian eruption is no longer upheld by upwards forces from the explosions, this cloud can collapse. A collapsing eruption column results in fast-travelling clouds of hot gases and volcanic material down the slopes of the volcano called pyroclastic flows.

If water from the sea, a lake or under the ground starts interacting with the magma, very explosive reactions can occur. These magma-water explosions, or phreatomagmatic explosions, produce large craters and release lots of fine material less than 2mm in diameter called ash.

A large part of this ash is transported along the ground surface by fast-travelling clouds of water vapour called base surges.

Many of the younger Australian volcanoes erupted with a mixture of different styles.

Tower Hill not only erupted very explosively because of the interaction between magma and water, but it also produced fire fountains, resulting in the cones in the centre of the crater.

The eruption of Mt Gambier 5,000 years ago is probably the best studied of all of these volcanoes. This volcano has at least 14 different vents from which the eruption occurred.

The most prominent are the Valley Lake and the Blue Lake craters, which were formed as maar craters, but not in the normal style. These craters were capped under a lava flow from earlier phases in the eruption, so with increased magma-water interaction later on, pressure built up.

This pressure built up until it broke through the capping lava flow, producing a big Vulcanian-style blast with actual pyroclastic flows! Pyroclastic flows at Mt Gambier formed by Vulcanian-style blasts after Hawaiian fire-fountaining. Firstly, the Blue Lake crater erupted with such a large blast, which was followed by a westward-directed blast in the Valley Lake crater. (Image credit: Jozua Van Otterloo and Cas, RAF. in the Journal of the Geological Society)

Volcanic eruptions are ranked on the Volcanic Explosivity Index (VEI). The smallest explosive eruptions such as fire fountains have a ranking of 1 and supervolcanoes rank 8.

The 2010 Eyafjallajökull eruption (or just the 2010 Iceland eruption) that caused a lot of disruption in Europe ranked 4.

The studied volcanic cones and maars formed by more intense explosive activity in the Newer Volcanics Province ranged in VEI from 2 to 4. Eruptions at Mt Leura in Camperdown, Ecklin Maar and Red Rock near Colac were of VEI category 2, forming small plumes of 1-5km.

Most volcanoes in the area would have erupted with similar magnitudes. But Australia’s youngest volcano, Mt Gambier, has also been the most explosive (that we know of) with a VEI of 4.

It produced eruption plumes of about 10km in height and a large volume of magma erupted over a very short time. This eruption would have been very similar to the 2010 Iceland eruption.

So what can we expect the next volcanic eruption to be like? It depends where it happens.

If the next eruption occurs in the northern areas of the Newer Volcanics Provinces (around Bendigo, Ballarat or Hamilton), we can expect lots of lava flows and fire fountains.

But if it occurs in the southern part (Colac, Camperdown, Warrnambool or Mt Gambier), the presence of groundwater could make it much more explosive.

We could be up for an eruption just like the 2010 Iceland eruption where a big plume of ash was sent high in the atmosphere. In this case disruption will occur in Eastern Australia and New Zealand.

Will it happen any time soon? Well, the Newer Volcanics Province has been active for more than 4.5 million years, with eruptions occurring at least once every 10,000 years.

It could happen in our lifetime, but more likely it will happen after that.

Oh, another outcome of the research was that the first warning signs with Mt Gambier would have been noticed only by the most sensitive equipment up to two days in advance.

Such equipment is not present in the area at the moment. What if another volcano would erupt with an impact similar to that of the 2010 Eyjafjallajökull eruption? This image was created by overlaying the 2010 ash cloud over the Pacific region, taking into account the southern hemisphere atmospheric situation. (Image: Jozua van Otterloo)

Jozua van Otterloo is an Assistant Lecturer in Volcanology at Monash University.