The worms within: intestinal parasites 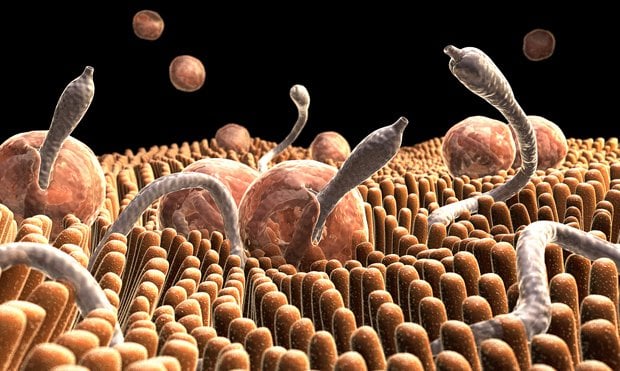 <em>C. parvum</em> is a common parasite that causes diarrhoea - sometimes up to 15L/day, which can be fatal.(Craig Bowman)
Reading Time: 3 Minutes • Print this page
Lurking in our guts is a wide variety of microscopic parasites – and they’re more common than you think.

JACKIE DELANEY WAS 40 when she first developed stomach problems, back in 1994. “To start with, the symptoms were mild – uncomfortable bloating after meals, knitting-needle-like stomach pains, slight nausea. Over the next three months, I got steadily worse until every day was a struggle to contain the  nausea, headaches, chronic fatigue, extreme bowel irritation, foggy head and depression. My weight dropped to 41kg. My life revolved around keeping the symptoms from spiralling out of control – mainly by restricting carbs.”

Doctors thought Jackie, who lives in the Blue Mountains, NSW, was suffering from irritable bowel syndrome. But eventually, in 2001, Professor Thomas Borody, a world-famous gastroenterologist who heads the Centre for Digestive Diseases in Sydney, found she was infected with two microscopic intestinal parasites, Dientamoeba fragilis and Blastocystis hominis. “The main feature of both parasites is that they are difficult to eradicate,” says Thomas. After trialling various drug combinations he found one that works and can cure close to 100 per cent of patients.

D. fragilis and B. hominis are common – about 6 per cent of Australians carry them, says Thomas. But only certain strains seem to cause gastro effects, which he thinks could explain why doctors have under-appreciated the link between these parasites and unpleasant gut symptoms.

Other intestinal parasites are even more common in Australia. While rates of infection have been falling generally, between 10 and 50 per cent of children carry pinworms. One intestinal nasty, Strongyloides stercoralis, is more common in rural and remote Aboriginal communities than anywhere else in the world.

In Australia, the two most common single-celled parasites that wreak havoc with people’s bowels are giardia (G. lamblia), which causes diarrhoea (sometimes the explosive variety) and cramps, and cryptosporidium (C. parvum), which gives its victims watery diarrhoea, cramps, nausea, vomiting and fever. Both are usually passed directly between people, and both mostly affect young children.

The first sign of infection with pinworms (Enterobius vernicularis) which grow up to about 13mm long, is usually a worm in the stool or on underwear (or an itchy bum). They attach themselves to the lining of the large intestine, and although they steal nutrients, they’re usually harmless. But some of their relatives can be more dangerous.

Threadworms and other parasites

The threadworm (Strongyloides stercoralis), can damage the duodenum, the first part of the small intestine, and if it travels in large numbers to the lungs – which can happen in people with weakened immune systems – it can be deadly. Treatment is also tricky – unless all the adult parasites and the larvae are wiped out, infection can continue for decades.

Heavy infection with hookworms (Necator americanus and Ancylostoma duodenale), meanwhile, can suck enough blood from the lining of the intestine to cause iron-deficiency anaemia. Whipworms (Trichuris trichiura), so-called because of their whip-like shape, burrow into the large intestine. These worms, which grow up to 5cm long, can cause bloody diarrhoea and even, in severe cases, rectal prolapse, where the rectum protrudes out of the anus.

Worm infections are more widespread in Aboriginal communities. “If you have 10 people living in a house and the toilet isn’t necessarily well looked after, general hygiene is more difficult,” says Professor James McCarthy, head of clinical tropical medicine at the Queensland Institute of Medical Research. And worms are more likely to be passed on.

“It’s not to do with personal behaviour,” James points out. “If we had better housing in Aboriginal communities, a lot of these problems would go away.”

More likely to get parasites from pets

People who spend a lot of time around animals – especially livestock, and dogs and cats – are also more likely to get more intimately acquainted with parasites. One of the nastiest of the worms animals pass to us is a tiny tapeworm of dogs (Echinococcus granulosus). Dogs get infected by eating infected herbivores – usually sheep. People get infected by swallowing tapeworm eggs from the dog’s faeces (one good reason to beware of a friendly lick on the face).

Once these eggs hatch, the larvae travel in the bloodstream and lodge in an organ, such as the lungs, liver or even brain, where they develop into a ‘hydatid cyst’. These cysts, packed with larvae, can commonly grow to the size of tennis balls. They put pressure on the organ, and if a cyst bursts, it can be fatal.

While worm infections are still more common in disadvantaged communities, overall, rates are falling in Australia. If you do spot a worm in your stool, if you’re otherwise healthy, you probably shouldn’t be too concerned, says James. “Most of the time, these things don’t cause a whole lot of problems,” he says.