Earthquakes: the 10 biggest in history 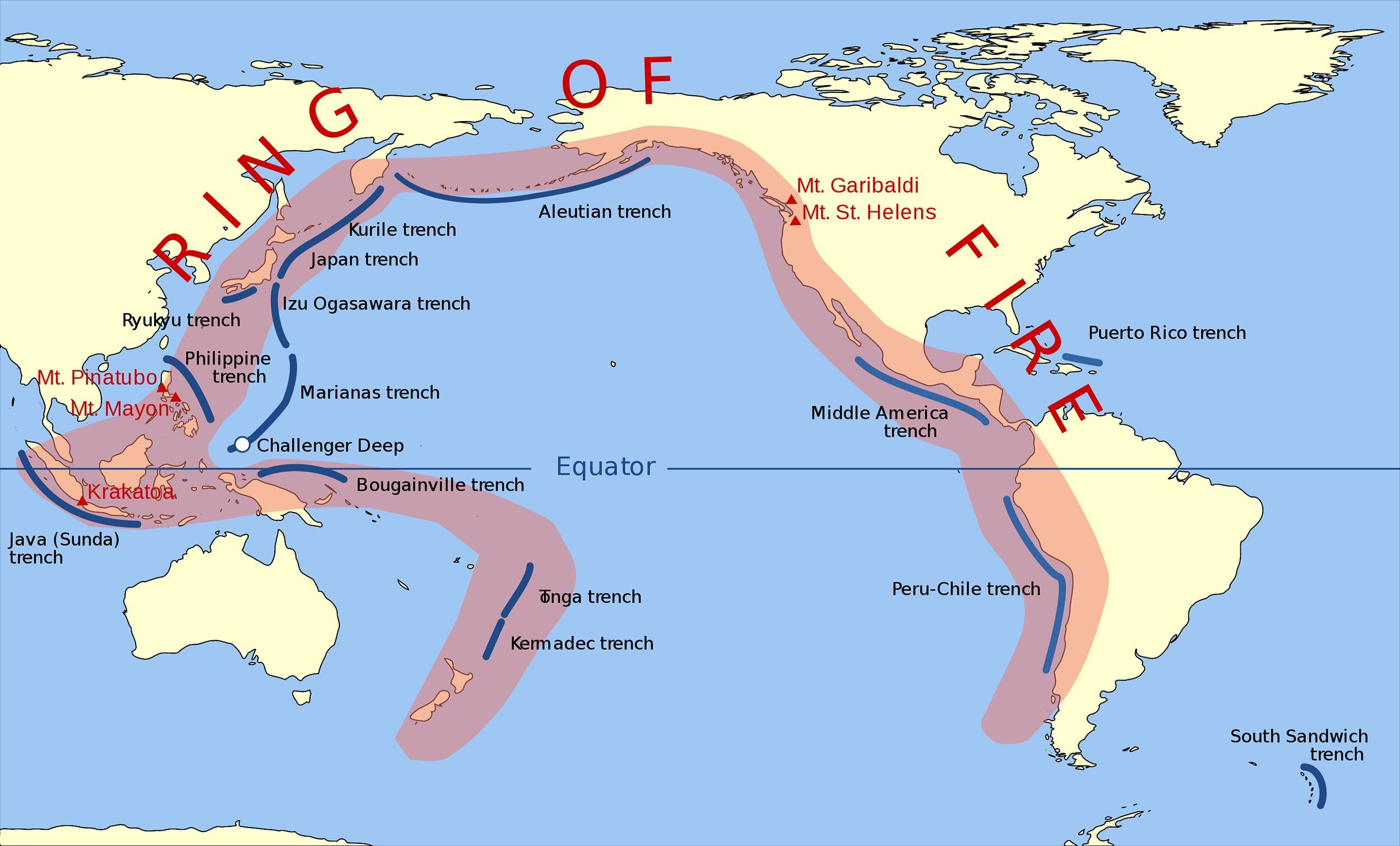 Most of the largest known earthquakes have been centred around the Pacific's Ring of Fire. Image credit: WIkimedia/Gringer
Reading Time: 4 Minutes • Print this page
Here are the 10 biggest earthquakes detected since records began.

THE EARTHQUAKE THAT struck off the Pacific coast of Japan on Friday 11 March 2011, was reported by the USGS (US Geological Survey) to be magnitude 8.9, but four days later the Japan Meteorological Agency upgraded it to magnitude 9.0, making it perhaps the fourth largest earthquake since records began.

“This data is computed from seismometers located across the world,” says Professor Mike Sandiford, a geologist at the University of Melbourne. “So the magnitude cannot be accurately calculated immediately after the event; it takes a few days.” It’s possible that the magnitude of the quake will be upgraded even further, he says.

Originating near Sendai, in the north east, the Japanese quake and the resulting tsunami has caused massive damage and may even lead to volcanic activity. The death toll could exceed 10,000 according to some reports, with many billions of dollars worth of damage.

Big earthquakes on the rise

There may be cyclical clustering patterns of high-energy earthquakes that last about a decade, interspersed with longer less-active periods, he says, but there isn’t enough data to be certain.

“The problem in looking for patterns is that we didn’t have the seismological equipment available for making accurate recordings before [the 1950s] … So it is too early to categorically identify a trend of this kind.”

This earthquake killed 1655 people, injured 3000 and displaced two million. It caused US$550 million damage in Chile, while the tsunami that it spawned caused deaths and damage as far away as Hawaii, Japan and the Philippines. The ‘rupture zone’ of the quake was more than 1000 km long. Two days after the initial quake, the nearby volcano Puyehue erupted, sending ash and steam up to 6 km into the atmosphere over a period of several weeks.

Compared to the Chilean earthquake, this earthquake was less damaging: the resulting tsunami took 128 lives and caused overall US$311 million in damage. The earthquake was felt mainly over Alaska, as well as some places in Canada, while the tsunami created by it caused damage as far away as Hawaii. The most damage was sustained by the city of Anchorage, 120 km north-west of the epicentre. Shaking from the quake itself is reported to have lasted for three minutes.

In terms of damage and loss of life, the scale of the disaster caused by the resulting Boxing Day Tsunami was enormous. In total, 227,900 people were killed or presumed dead, with around 1.7 million displaced over 14 countries in South Asia and East Africa. The epicentre was 250 km south-east of Band Aceh, Indonesia, at a depth of 30 km. Several days later on 28 December, a mud volcano began erupting near Baratang, Andamar Islands, which is thought to have been associated with the earthquake.

So far the official death toll stands at several thousand from the combined effect of the powerful earthquake, aftershocks and the tsunami. However, the total is expected to rise, with some estimates of a final toll of over 10,000. Economic impacts are expected to be huge, with the shutting down of nuclear reactors which many industries rely on for power.

This earthquake generated a tsunami that caused widespread damage in the Hawaiian Islands. Property damage was estimated at around US$1,000,000. Some reports describe waves of over 9 m high at Kaena Point, Oahu. A farmer on Oahu reported the loss of six cows to the tsunami, but no people were reported killed.

This earthquake and subsequent tsunami killed at least 521 people, with 56 missing and 12,000 injured. More than 800,000 people were displaced with a total of 1.8m people affected across Chile, where damage was estimated at US$30 billion. The epicentre was 335 km south-west of Santiago, at a depth of 35 km. A minor tsunami travelled across the Pacific causing damage to boats as far away as San Diego, California.

This earthquake caused a tsunami that is reported to have killed between 500 and 1,500 in Ecuador and Colombia. The tsunami travelled as far north as San Francisco, on the west coast of the US, and west to Hawaii and Japan. The tsunami took roughly 12 hours to cross the Pacific to Hilo, Hawaii.

The worst of the damage attributed to this earthquake was caused by a tsunami, reported to be about 10 m high on Shemya Island. The wave caused flooding on Amchitka Island, causing US$10,000 in property damage. No deaths or injuries were reported.

This earthquake killed 1313, with over 400 people injured by the tsunami as far away as Sri Lanka. The epicentre was 205 km north-west of Sibolga, Sumatra, at a depth of 30 km. This region, also the site of the 2004 Boxing Day Tsunami, is particularly geologically active, with three of the 15 biggest known earthquakes having happened here.

This inland earthquake caused widespread damages to buildings as well as large landslides. 780 people were killed in eastern Tibet, with many villages and towns affected across Assam, China, Tibet and India. Oscillations to lake levels occurred as far away as Norway. The total death toll is likely to be higher, as no definitive total was ever estimated. While the earthquake itself is known as the Assam Earthquake, it is believed the epicentre may have been in Tibet.

Extreme weather events, from bushfires to floods, and sudden geological changes, from earthquakes to tsunamis, have an enormous impact on our planet.

In this book, students investigate different examples of extreme weather, focusing on examples from around Australia, and learn how these events affect living and non-living aspects of the environment.

Students will investigate the past, lea…