WARNING: Aboriginal and Torres Strait Islander readers should be aware that this article contains the images and names of deceased persons.

ON JULY 15, 1968, the discovery of burnt bones on a remote shoreline of an unnamed lake basin began a story, the consequences of which remain sadly unfinished today.

It’s the story of a legend, the discovery of Mungo Lady, the first in the series of steps that led to the creation of the Willandra Lakes World Heritage area.

But it’s a story where the making of a legend has fallen off the national radar leaving a legacy of shame.

At a time when we afford so much effort to remember those in Australia’s more recent history, is it not time to honour those who helped tell so much of the ancient history of our land?

It was just one year after the circuit breaking 1967 referendum. Aboriginal people were being heard.

For me it was the beginning of a journey to explore the geological legacy of climatic change in our ice age landscapes, the ancient dunes, lakes and rivers.

I had recently joined the Australian National University Department of Geography and had chosen dry lake basins as possible rain gauges for ancient wet climates.

I was mapping ancient shorelines and finding strange objects, freshwater shells high above water levels, stone tools lying on erosion surfaces, fallen from above but with no certainty of their original undisturbed sites. People had been there long before me.

I reported my suspicions of ancient shoreline occupation of this now dry basin to archaeological colleagues at the Australian National University. I later named the basin, Lake Mungo, after the pastoral property lease that covered the major part of the basin, Mungo Station.

From geological analysis I was confident the lakeshore dune suggested origins at least 20,000 years ago. This was immediately dismissed by my archaeological colleagues with the warning that: “Bowler, geologists should stick to stones. Leave the archaeology to us.”

That warning never anticipated the finding of bones in lake-shore stones.

Concerned to resolve the puzzle, I was studying freshwater shells deep in the dune core of this ancient lake margin. According to my field notes that was on July 15, 1968, although it was incorrectly reported for a time as July 5. 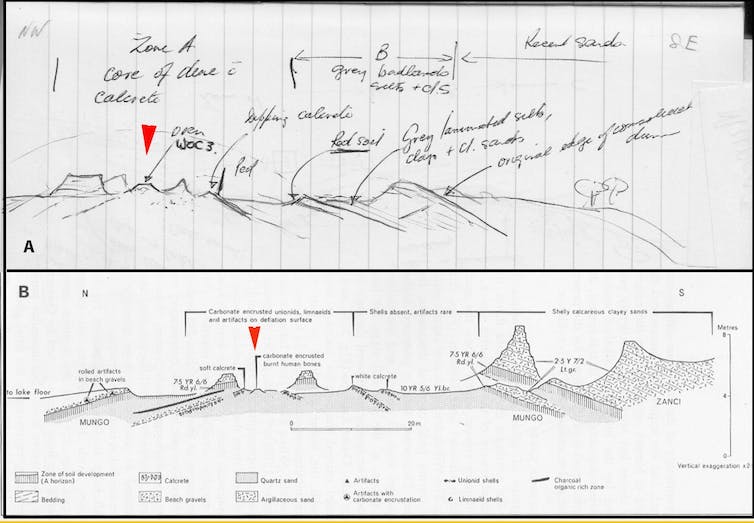 If those shells represented a human midden (a refuse heap), it involved occupation much older than accepted at the time. But was it human agency? Birds can carry shells.

Returning to camp in the late afternoon, an interesting block of soil carbonate lay exposed on an erosion surface. Nothing special in itself but this contained a substantial concentration of burnt bones. 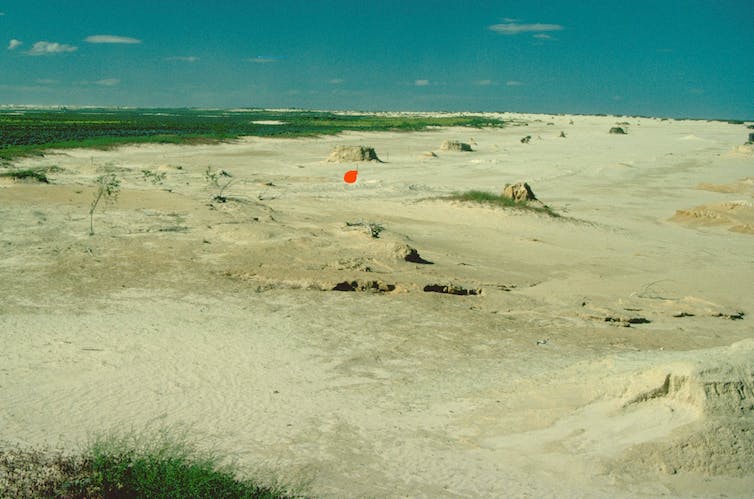 Firmly cemented in soil carbonate, this reflected a fire of great antiquity. The organised burning of large mammalian bones, recorded in field notes as a probable hearth, clearly involved human agency. Ironically, this was the first item of archaeological evidence clearly in an undisturbed position.

Duly marked for future location, I reported these findings in an October 1968 archaeological seminar at the ANU. The photographs shown then of burnt bones of such obvious antiquity spoke for themselves. 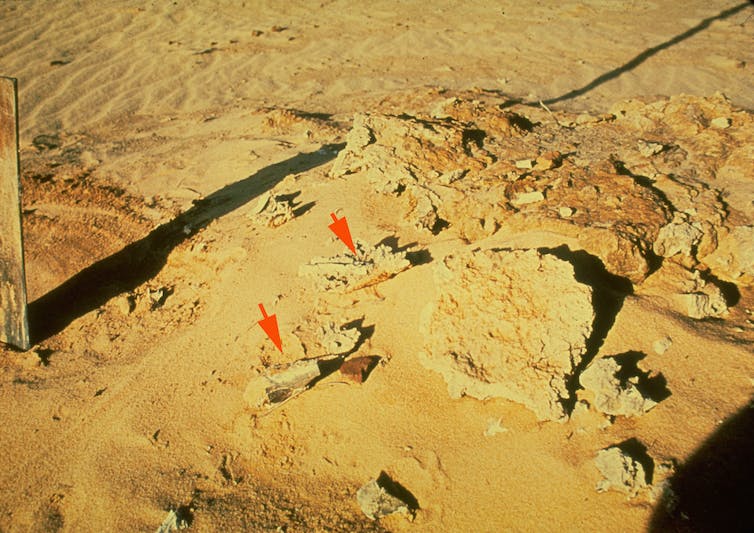 An enlargement showing fragments of burnt bones (arrowed) believed then to be part of a human hearth. (Image Credit: Jim Bowler)

The scepticism of my archaeological colleagues diminished. Despite an immediate invitation, it took another six months, until March 1969 to lead a team of soil scientists and archaeologists to the site. 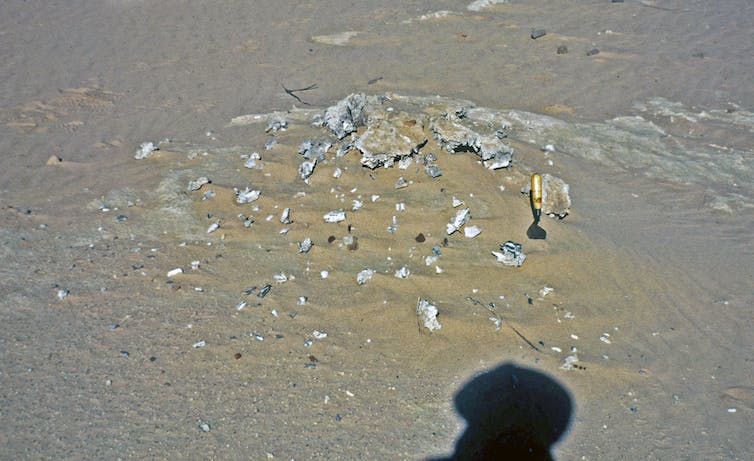 The March 1969 photograph of the site on the day of archaeological recovery of bones. (Image Credit: Courtesy of the late John Mulvaney)

Suddenly, this was not just the reflection of human activity, we were in the presence of humanity itself. Australian archaeology took a leap forward!

A very modern human from many years ago

Collected into Professor John Mulvaney’s suitcase, the bones were delivered in Canberra to Dr Alan Thorne, the ANU physical anthropologist. His meticulous cranium reconstruction demonstrated the remains of a fully modern young woman. 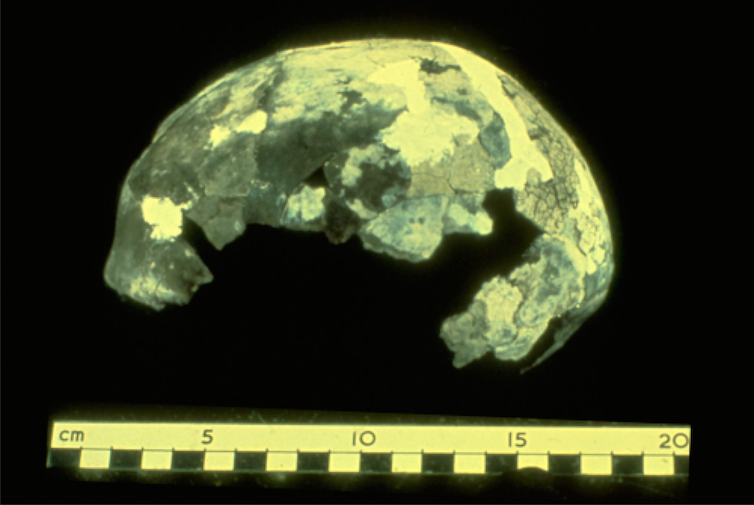 Dated by later work to 40,000 years ago, that small modern cranium had impacts far beyond its size. It remains today as the world’s earliest evidence of cremation.

It brought to a close the long and, to Indigenous peoples, the offensive practice of cranial profiling, the measure used to test differences between ancient and modern cranial features.

Following its earliest introduction by Thomas Huxley in 1863 – a man known as Charles Darwin’s “bulldog” – the gathering of Aboriginal skeletal remains became a virtual industry.

Grave robbers competed to supply university anatomy departments and museums around the world. Alone, but now announced on the international stage, Mungo Lady’s clearly modern cranium brought it to an end. At 40,000 years ago, she was just like us!

To Aboriginal Australians, the removal of bones and the Thorne reconstruction brought mixed blessings.

Firstly, removal of remains without permission evoked memories of more grave robbing. For a time, cross-cultural tensions developed between scientific and Indigenous cultures.

Some nine years later, friendly dialogue led to the signing of an historical accord, a collaborative agreement between the two groups – scientists and traditional owners – each learning from the other. That agreement holds to the present day.

As though by canonisation, she became a saintly figure especially to the central pioneering elder, the late Alice Kelly together with her companions from related tribal groups, Alice Bugmy, Tibby Briar and Elsie Jones. 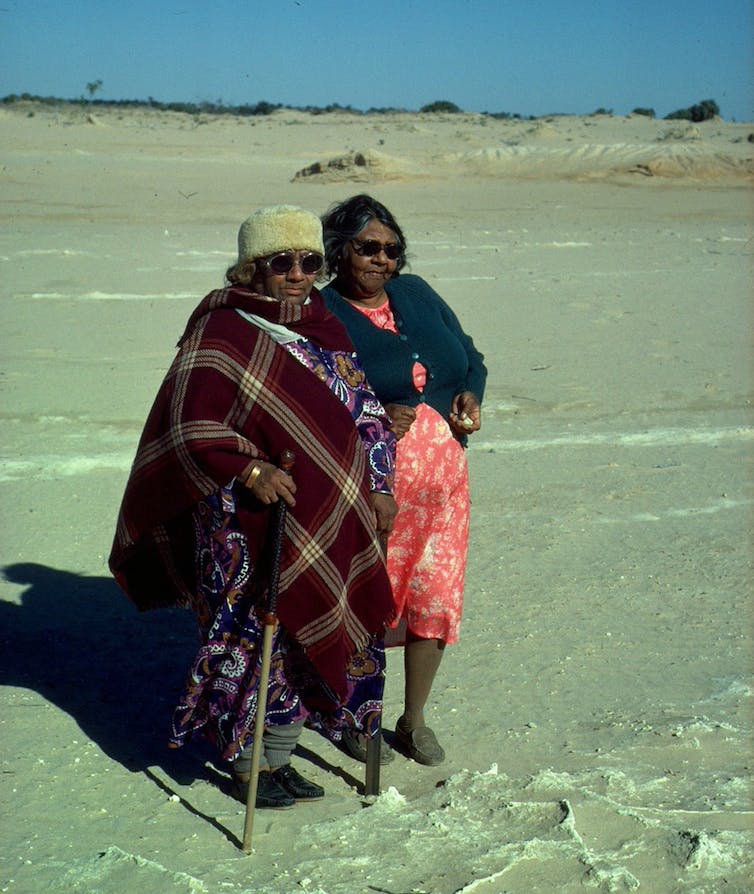 These four pioneering women stood together, to assert Aboriginal ownership, to challenge the bureaucracy and ensure the legacy of Mungo Lady held pride of place in the history of Australia’s occupation.

Sadly that resolve has been betrayed. The story of her heritage management is no less than disaster.

Returned to traditional owners by Alan Thorne in 1992, the skeletal remains of this legendary person lie today in anonymous solitude with those of the later discovery, Mungo Man, out of sight and out of mind in storage at Lake Mungo visitor precinct.

No monument, no place for respectful gratitude, no place to honour. In late 2013, the NSW government, without warning, summarily dismissed all management structures, Central Management, the Elders Council and the Scientific Advisory group. For the last four years, there has been no management in place, no one to care.

A costly new plan of management was delivered by consultancy in early 2014, but there remains, even today, no management group to give it to. The governments of both NSW and federally have turned their backs on this legendary issue.

Traditional owners, scientists and the Australian public have been deprived of that fundamental right to honour the dead to whom our history owes so much.

But the nation owes a special debt to this ancient lady. In death, together with her Aboriginal women pioneers, she has changed the way we see ourselves across the cultural divide.

Time to honour a Lady

So a message for Prime Minister Malcolm Turnbull: A$100 million appeared no problem for that worthy Monash memorial to our dead in France.

It’s time now to cut through the tangled web of bureaucratic inertia, to bring the remains of those legendary Mungo figures, Mungo Lady and Mungo Man from storage to a central place of honour.

The nation needs a vision, the inspiration to build the contemplative space where stories of ice age land and ice age people join to illuminate what it means to be Australian.

Jim Bowler is a Professorial Fellow,School of Earth Sciences,(Geology) at the University of Melbourne.