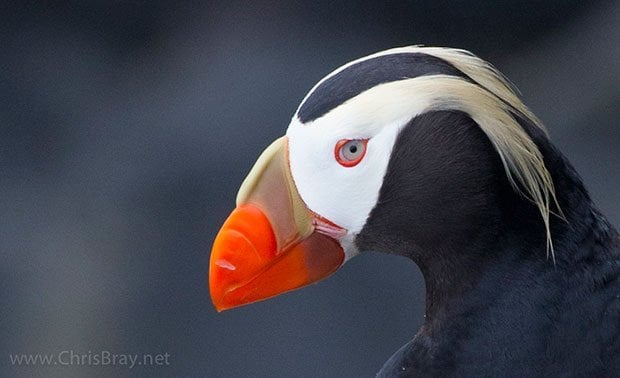 EVERYONE LOVES PUFFINS – THEY’RE the parrots of the sea. The problem is they mostly reside on cliffs, at the ends of the earth, and I never dreamed I’d get to photograph them.

But sailing our little boat Teleport up to the remote St Paul Island in the Bering Sea, between Alaska and Russia, this July, Jess and I started seeing these guys flapping across the water and I was determined to get a good shot.

Ashore, we found cliff after cliff offering poor, top-down views of these tufted puffins (Fratercula cirrhata), but finally found this one perched so far away that we appeared almost parallel. The other nice thing about this opportunity was the background cliff face was uniform and uncluttered, and far enough behind him that I could blur it out into a nice soft grey.

The available light was pretty muted as it was a foggy day, and so it was a challenge to get a fast enough shutter speed to handhold my 100-400mm lens, which was zoomed out to 400mm. The basic rule of thumb is don’t handhold anything slower than [1/focal-length] so ideally 1/400th sec, but with inbuilt stabilisation and me laying prone resting my elbows on the ground, I figured I could get away with /100th sec for this shot – provided the bird didn’t move.

As always, there were other competing factors: I wanted to ensure the whole head would be sharp, not just the point where I focussed, so that it would reveal all the feather and beak detail. So instead of using aperture f/5.6, which gave me too small a depth of field, I closed my aperture down to f/8 in Av mode, which meant I had to crank my ISO up to 1250 before the matching shutter speed rose to my 1/100th second minimum.

Using one-shot, centre-point autofocus on the eye, I gently squeezed off a shot each time the puffin briefly swivelled its head side-on. Of the four or five shots I took, this was the sharpest.

The last point to admit is that this shot has then been heavily cropped in post-production, because even at 400mm, the entire puffin was still quite small in my shot. That’s the beauty of today’s high-megapixel cameras – I always try to capture the shot I want in-camera, but sometimes I do need that extra bit of reach, or to re-frame the shot later. As you can see, you can get away with it within reason. You do lose resolution though and I wouldn’t be able to blow this shot up to a full page.

It would have been great to have lugged a giant 600mm lens sailing with me, and shot this during a sunny day, on a closer bird, but the reality of being a wildlife photographer is that you have to work with what you’ve got. And therein lies the challenge, and for me, the enjoyment.