On this day: Pemulwuy is killed
On this day: Trout arrive in Australia
The evolution of Anzac Day from 1915 until today
674

Home Blogs On This Day On this day: Uluru given its Aboriginal name

On this day: Uluru given its Aboriginal name

On 15 December 1993, Uluru was officially given a dual name, recognising its importance to Aboriginal people.
By Anthony Lock • November 7, 2013 • Reading Time: 2 Minutes 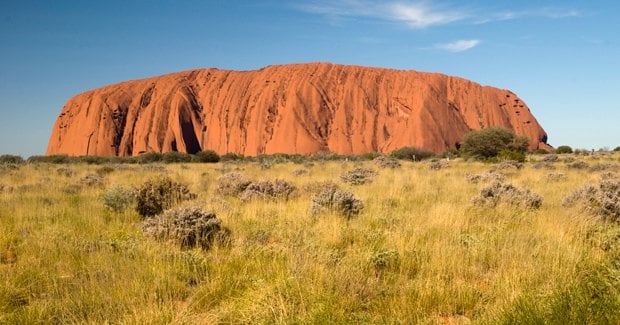 Uluru was given its Aboriginal name officially in 1993. Image credit: Carolyn Barry

ON 15 DECEMBER 1993, Uluru became the first icon in Australia to be given back its Aboriginal name, giving birth to a wave of dual-named sites and landmarks across Australia.

Uluru was the name given to the landmark by the local Aṉangu people. British surveyor William Gosse was the first European to ‘discover’ the monolith – the largest rock of its kind in the world – in 1872, and named it Ayers Rock after the former chief secretary of South Australia, Sir Henry Ayers.

“Dual naming leads to better cross-cultural communication as it is one of the windows people can utilise to understand more of another culture’s heritage,” says Bill Watt, chair of the Committee for Geographic Names Australasia.

“For people to have local stories and place names available while travelling in Australia provides more significance to the place names and your understanding of the Aboriginal people’s connection with the land,” he says.

RELATED GALLERY: The many faces of Uluru

Uluru is an inselberg – literally meaning island mountain – and is what remains of a mountain range largely eroded away. It has a circumference of more than 9km, a height of 350m, and covers 3.3sq.km.

“Uluru is unusual because there is an enormous flat plain with some sand dunes, and then there is suddenly this large rock,” says Deirdre Dragovich, associate professor at the University of Sydney’s School of Geosciences.

It is composed chiefly of a sandstone called arkose, and is believed to have been originally sand that formed a fan-shaped deposit, known as an alluvial fan. The rock rises abruptly, and looks, from a distance, to have a smooth surface. This makes Uluru unique, as most inselbergs have a gradual slope and a cracked and jagged surface, due to the effects of weathering and erosion.

The area around Uluru was first settled about 10,000 years ago, and is sacred to the Aṉangu people of Central Australia. In Aṉangu culture, Uluru marks the site of significant events from The Dreaming – when creator beings formed the landscape – and is also the home of their ancestors. Uluru now has wider significance as a symbol for Aboriginal people across Australia.

Europeans unsuccessfully attempted to settle the area in the first 60 years after discovering the site. In the 1940s settlers returned and developed a tourism industry around what was then known as Ayers Rock. More recently, it has become a World Heritage site, with ownership returned to the Aṉangu in 1985.

After dual naming, many tourist attractions at the site now focus on Aṉangu culture, and visitors often take walks around, rather than climbing, the rock.

“I’ve found that personally, when a non-Aboriginal comes to understand the significance of a place to Aboriginals it increases the significance of the place to that person as well, particularly the case if they have an understanding of the story associated with the place,” says Bill. “My profound hope, desire and wish is that the number of dual-named place increases, and I believe it certainly will.”