Bec Crew is a Sydney-based science communicator with a love for weird and wonderful animals. From strange behaviours and special adaptations to newly discovered species and the researchers who find them, her topics celebrate how alien yet relatable so many of the creatures that live amongst us can be.
By Bec Crew • September 6, 2021 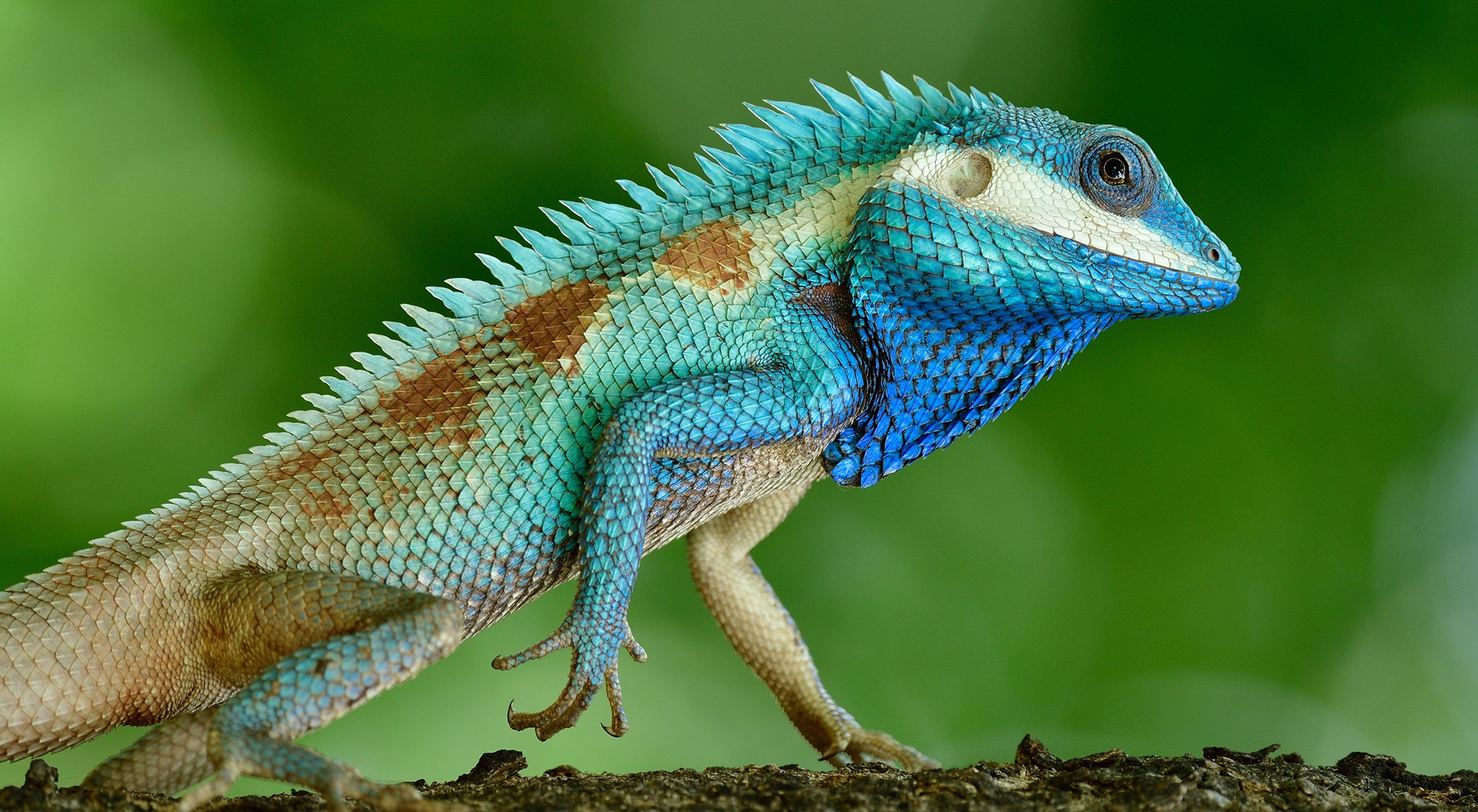 Image credit: Super Prin/Shutterstock.com
Reading Time: 2 Minutes • Print this page
This ridiculously good-looking lizard is showing off its best colours for the ladies. Those flamboyant colours might also convince a predator to move right along, which makes them this little dragon’s greatest asset (if you couldn’t already tell).

The blue-crested lizard (Calotes mystaceus) hails from Southeast Asia, China and South Asia. It often grows to around 28 cm long, but some much bigger specimens have been recorded at 42 cm. It’s not uncommon to spot these lizards sunning themselves in a public park, such as in Thailand or Vietnam – a true sight to see if they have their breeding colours on.

Ordinarily, blue-crested lizards have very drab colouring, typically an olive or brown. But during the mating season, they take on an array of turquoise, bright blue, yellow and gold. The yellow or gold forms a trail of diamonds that runs along the front half of its body.

Here’s one showing off those stunning jewel tones, and clearly trying to make us jealous:

The blue-crested lizard belongs to the Calotes genus of forest lizards, of which there are about 25 known species. Calotes lizards have earned the rather creepy nickname, bloodsuckers, because some species develop bright red colouring all over their heads during the mating season.

Whether it’s blood red or bright turquoise, these colours can appear before your eyes, similar to how you might have seen a chameleon change colours. This is crucial if the lizard wants to ward off a sudden threat – a function of the colour-change that scientists have been investigating for more than a century.

According to one of the earliest reports of the blue-crested lizard, as recounted in this 2018 paper, the bright colours can be brought on by an encounter with a snake:

“They invariably faced the snake, bowing to it and nodding their heads exactly as when courting. The crest was strongly erected, the gular [throat] pouch fully distended, and the colours would gradually become more vivid until they were almost as intense as during sexual excitement.”

More recently, researchers in Sri Lanka observed something similar in the common green forest lizard (Calotes calotes). According to their 2018 study, the species, which normally has a brownish or yellowish head, can saturate it with red pigment in a matter of minutes when faced with a threat.

It’s not hard to see how intimidating that transformation might be:

You can see the transition in action In this wonderful footage of a common green forest lizard: