Bec Crew is a Sydney-based science communicator with a love for weird and wonderful animals. From strange behaviours and special adaptations to newly discovered species and the researchers who find them, her topics celebrate how alien yet relatable so many of the creatures that live amongst us can be.
By Bec Crew • July 27, 2021 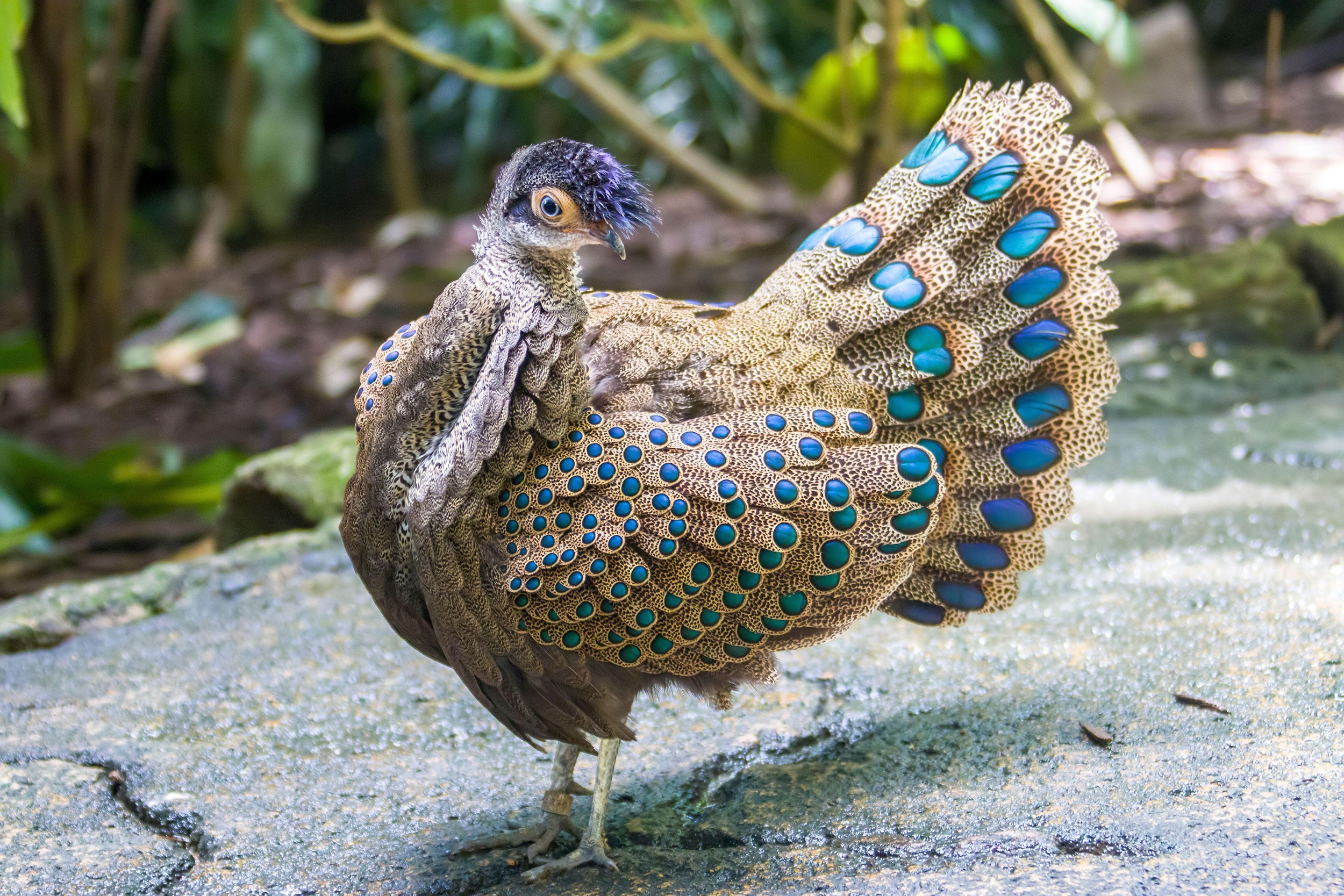 Image credit: Danny Ye/Alamy Stock Photo
Reading Time: 2 Minutes • Print this page
Like a bird with butterfly wings, the peacock-pheasant has some of the most stunning plumage in the animal kingdom.

The species pictured above is the Malayan peacock-pheasant (Polyplectron malacense), a very rare bird native to South East Asia, found in the lowland forests of the Malay Peninsula.

These ‘mini peacocks’ have one of the shortest tails of all the peacock-pheasants in the genus Polyplectron. Their turquoise and purple spots, embedded within a sea of salt-and-pepper speckles, look particularly beautiful when in full-display mode:

Here’s a close-up of the grey peacock-pheasant’s spots, with their mind-bending colours:

These patterns, and those on the tail of the Indian peafowl (Pavo cristatus) – known to most of us as the peacock – look an awful lot like the eyespots (or ocelli) of certain species of butterflies and moon moths, which are thought to be a form of aposematism, an anti-predator strategy.

(Even tigers appear to have eyespots, which begs the question: what kind of predator is a tiger hoping to ward off?)

Some researchers have questioned whether eyespots on peacocks, peacock-pheasants and other bird species could have a similar function. And if you read about peacock-pheasants on Wikipedia, it’s stated as fact that they do.

A few years ago, a team led by Suzanne Amador Kane, a Harvard physicist with a special interest in the behaviour of various species of birds, decided to test how conspicuous these patterns are to different types of predators.

Using various imaging technologies, they modelled what the eyespots would look like to mammals such as dogs, cats and foxes at different times of the day, at various distances, and in different environments.

The study, published in 2019, found that the eyespots are likely to be very conspicuous to other birds of the same species, but when it came to predators… well, the jury’s still out on that one.

One thing the researchers are sure of is that those bright, beautiful colours certainly aren’t hindering peacocks and other brightly coloured birds’ chances of survival – a conclusion other researchers have come to, as well.

Whether these eyespots are actually scaring off their foes is a question for further study. It sounds like a great PhD project to us!

In the meantime, here’s some footage of the wonderful Malayan peacock-pheasant: