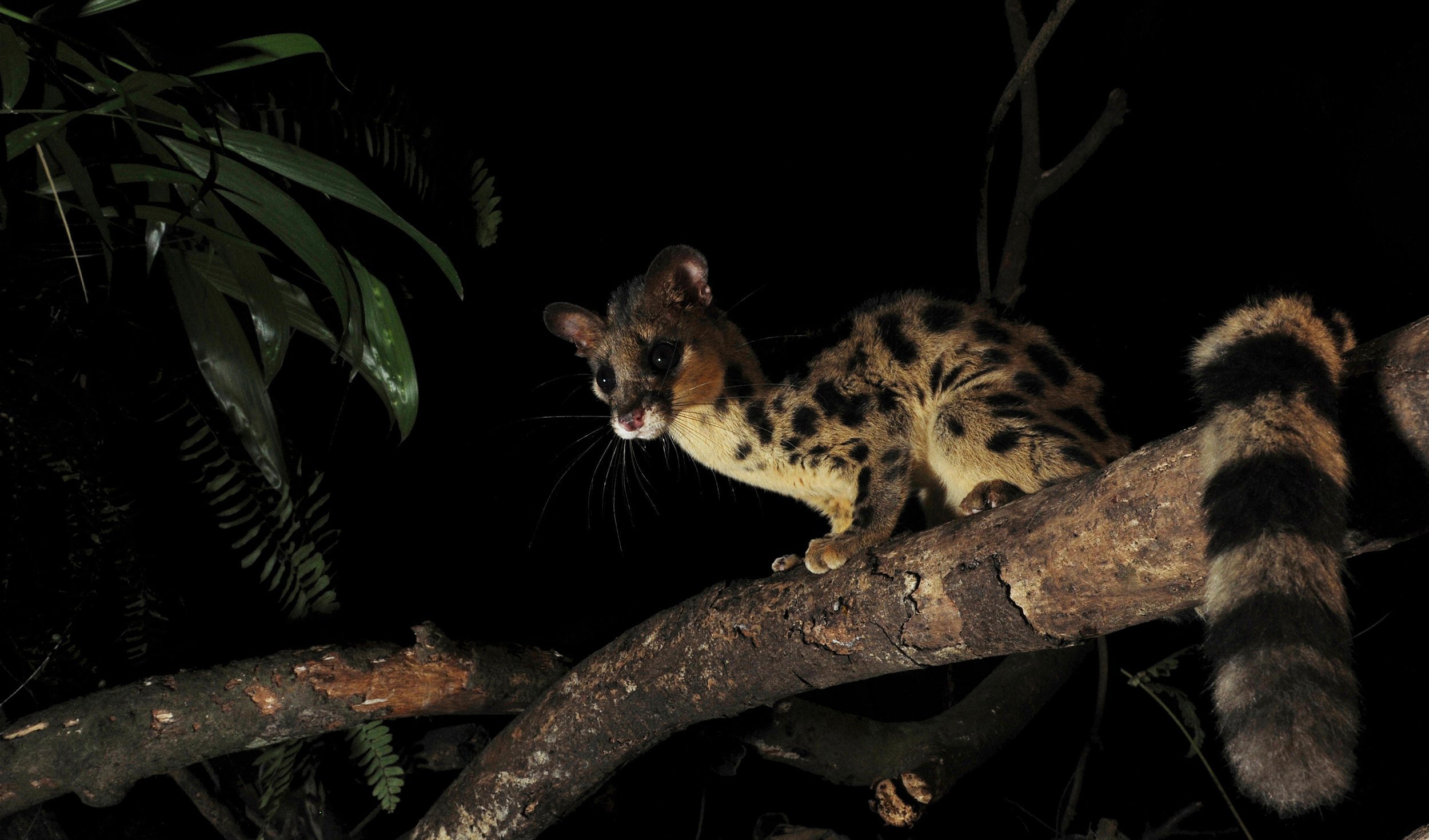 These beautiful creatures have long been considered members of the Viverridae family of mammals, which includes binturongs (also known as bearcats, famous for smelling like popcorn), and genets, civets, and oyans, all of which look like elongated cat-like possums, often decorated with spots and stripes.

But a 2003 study published in The Royal Society journal suggested that, based on their evolutionary history, the Asiatic linsangs belong to their own family, Prionodontidae. There are two known species of Asiatic linsang, the banded linsang (Prionodon linsang), pictured above, and the spotted linsang (Prionodon pardicolor). They are found in places such as Thailand, Myanmar, Borneo, and Vietnam.

The two other known species of linsang, Leighton’s linsang (Poiana leightoni) and the African linsang (Poiana richardsonii), native to West Africa and Central Africa, respectively, remain in the Viverridae family.

Asiatic linsangs are often confused with civets or genets, because their features are quite similar. But they are by far the rarest of these mammals – their secretive and solitary existence means scientists know very little about how they live, breed, and care for their young.

What we do know about Asiatic linsangs is they have retractable claws like cats, which they use to climb up trees, and sharp, pointy teeth, great for tearing apart prey such as mice, squirrels, lizards, frogs, snakes, and birds.

Their bodies stretch to about 30 cm long, and their tails go even longer – almost 40 cm, for some individuals.

They look quite bizarre, being so stretched out. As you can see in this camera trap footage of a banded linsang, the stripes and bands on its fur are almost mesmerising as it moves around:

Because these animals are so beautiful to look at, they’re victims of poaching and the illegal pet trade. That, combined with a loss of habitat, means the Asiatic linsangs, while not technically classified as threatened, are declining in numbers in a concerning way.

Here’s a spotted linsang, which was confiscated in Hong Kong along with a leopard cat (Prionailurus bengalensis) – a small wild cat species from South, Southeast, and East Asia – and more than 1,000 other wild animals thought to have been smuggled in from mainland China. What’s particularly striking about linsangs is their huge bug eyes, which seem to bulge out of their sweet little faces.

They need such enormous eyes to see in the dark, but it really does give them an eerie vibe when seen up close: