The horned parakeet looks like a tiny green dragon

Named for the twin plumes sprouting from its head, the horned parakeet is dressed head-to-tail tip in tropical colours. 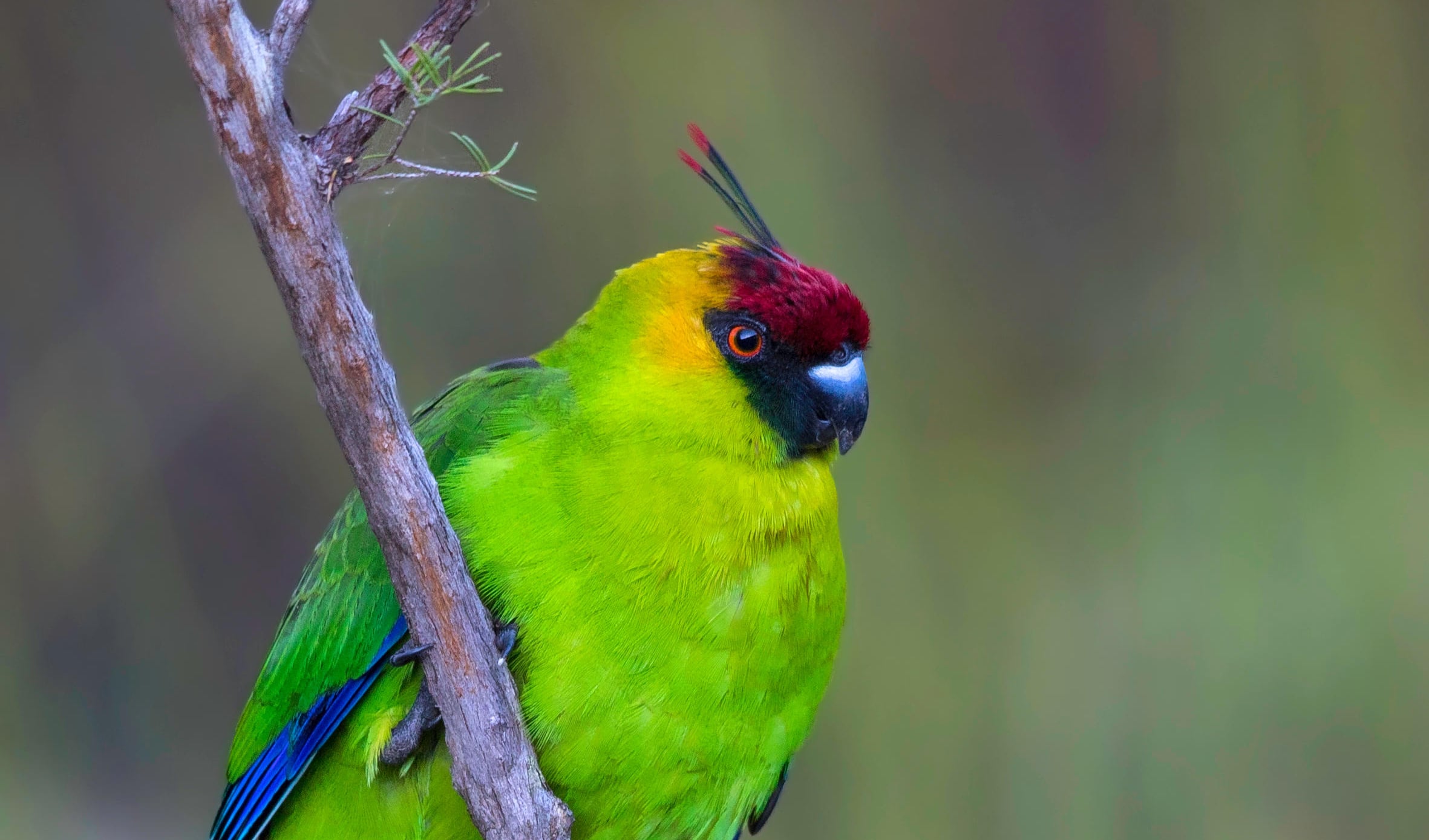 A RARE AND unusual bird, the horned parakeet is found in just one place on Earth – the humid pine forests of New Caledonia.

The horned parakeet (Eunymphicus cornutus) grows to just over 30 cm long; the females are typically smaller than the males. While little is known about their breeding behaviour, there have been cases of nest-sharing recorded – where two females incubate their eggs in the same nest at the same time.

This is a strange behaviour for parrots, but even stranger is the behaviour of their close relative, the New Caledonian parakeet (Cyanoramphus saisseti), which is thought to practice ‘cooperative polyandry’.

Meaning “many males”, polyandry describes a behaviour where the female will share her nest and mate with multiple males throughout the breeding season.

Polyandry occurs in less than 1% of all bird species, and most known cases are performed by shorebirds. It’s similar to polygyny, where a single male mates with multiple females (lions, for example).

Parrots are usually monogamous, which means they often stay with their breeding partner year-round, and won’t stray, even when they join a larger flock.

The horned parakeet belongs to the Eunymphicus genus, of which there is just one other member – the Ouvea parakeet (Eunymphicus uvaeensis), endemic to the tiny island of Uvea in the Loyalty Islands Province of New Caledonia.

While this parrot looks very similar to the horned parakeet, there’s a key difference – their headgear.

The horned parakeet has its little red horns, which, in this 18th century illustration, make it look like an elegant green dragon:

The Ouvea parakeet has a more ‘traditional’ crest. You can see a comparison in this 19th century illustration:

Sadly, both parrots are in trouble. They’ve been classified as vulnerable due to their declining populations. The main reasons for their decline are habitat loss and predation by invasive rats.

The good news is that trapping, trade, and poaching – common problems for beautiful birds such as this – do not seem to be an issue for this particular species.

We’ll leave you with a sweet little guy, making his way through a Physalis shell before dropping it like a sack of potatoes:

See more
The wandering sea anemone is the tumbleweed of the ocean
The road to saving Australia’s regent honeyeaters
An extinct Tasmanian crayfish has been re-discovered
Researchers decode Aussie lungfish genome
Rare footage of fighting Mulga snakes recorded at Scotia Wildlife Sanctuary
Photos from the field: zooming in on Australia’s hidden world of exquisite mites, snails and beetles
Moon moths have the creepiest energy and we’re here for it
Have you ever wondered how shells are birthed?
Three new carnivorous sponges found in Great Australian Bight
Bird melodies create the sweetest songs: you need to hear this
Dad gives birth to 100+ young – looks like he’s sneezing
Perenties fight to (near) death
The cicada’s deafening shriek is the sound of summer, and humans have been drawn to it for thousands of years
The eastern great egret looks like a proper Christmas angel
How you can view the ‘Great’ Conjunction of Jupiter and Saturn