The Dracula parrot is intimidating

Bec Crew is a Sydney-based science communicator with a love for weird and wonderful animals. From strange behaviours and special adaptations to newly discovered species and the researchers who find them, her topics celebrate how alien yet relatable so many of the creatures that live amongst us can be.
By Bec Crew • December 9, 2019 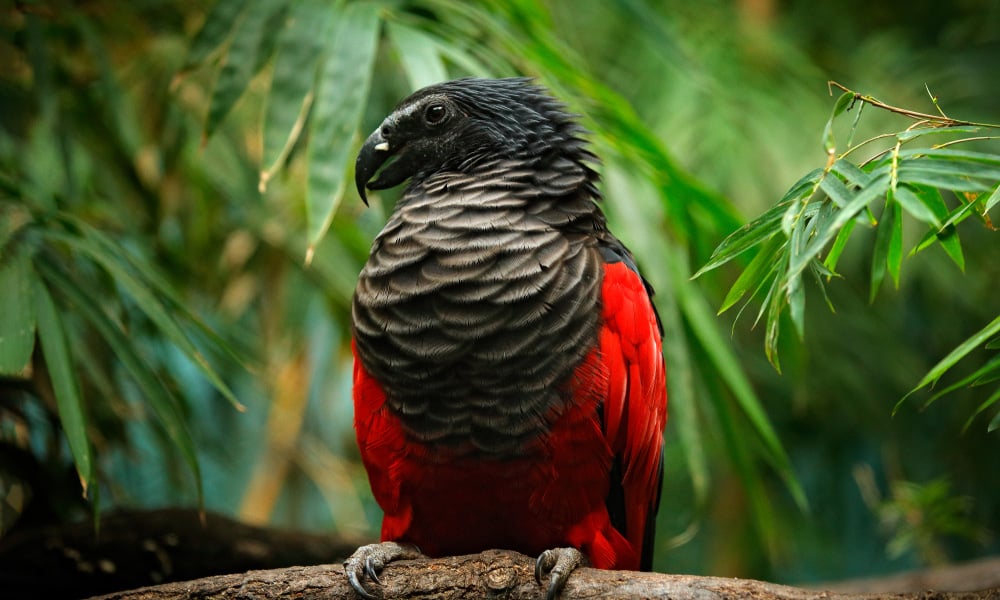 Image credit: Ondrej Prosicky/Shutterstock
Reading Time: 2 Minutes • Print this page
With the body of a parrot and the head of a vulture, the Dracula parrot is unnerving and beautiful all at once.

ALSO KNOWN as Pesquet’s parrot or the vulturine parrot, the Dracula parrot is found only in the cloud forests in the foothills and lower mountains of New Guinea.

Like silk lining flashing from inside a weathered overcoat, its brilliant scarlet plumage contrasts perfectly with its dusty grey chest, back, and tail. These striking feathers have made it a target of local poaches, which, together with increasing habitat loss, has driven the species to dangerously low numbers.

The Dracula parrot is a large, heavy bird, stretching to almost half a metre from beak to tail and weighing in at almost a kilogram. It maintains all that bulk by feeding almost exclusively on figs, which researchers suspect is why it ended up with its strange semi-bald head.

Just as vultures lost the feathers on their head as an adaptation for feeding on bloody carcasses, it’s thought that the Dracula parrot did the same in response to its diet of sticky fruits – the lack of feathers around its beak and eyes mean it’s able to avoid turning its face into a matted mess.

It’s such a perfect solution to the parrot’s syrupy diet that Matt Cameron, an Australian parrot expert, asks, “If avoiding soiled and matted head feathers is a significant advantage to individuals, it is surprising that bald-headedness is not more widespread among the other fruit-eating parrots.”

The Dracula parrot is the sole member of the Psittrichasinae subfamily of Indian Ocean island parrots – a sign that it is unique even among its own kind. To give you an idea of just how unique it is, here’s a quick rundown of the ‘true parrot’ families.

The true parrot superfamily Psittacoidea is divided into three families. There’s the Psittacinae

family of African parrots, which encompasses 11 known species, one of the most famous of which is the grey parrot (Psittacus erithacus) from sub-Saharan Africa, Madagascar, and the Arabian Peninsula.

There’s the Psittaculidae family of Asian and Australasian parrots and lovebirds, which has hundreds of members, including lorikeets, budgerigars, and fig parrots.

Then there’s the Psittrichasiidae family, which is split into two subfamilies: the vasa parrots (Coracopsis), endemic to Madagascar and other islands in the western Indian Ocean, and Psittrichasinae, where our Dracula parrot is placed alone.

The Dracula parrot doesn’t just look like something you’d see sitting menacingly on the shoulder of a Disney villain – it sounds creepy too. Its call has been described as a “harsh and rasping growl,” and a “drawn-out scream” when the bird is in flight.

Here’s one barely keeping its balance on a precarious branch in New Guinea: