These shocking katydids are one of Australia’s weirdest insects

Bec Crew is a Sydney-based science communicator with a love for weird and wonderful animals. From strange behaviours and special adaptations to newly discovered species and the researchers who find them, her topics celebrate how alien yet relatable so many of the creatures that live amongst us can be.
ByBec Crew• April 4, 2018 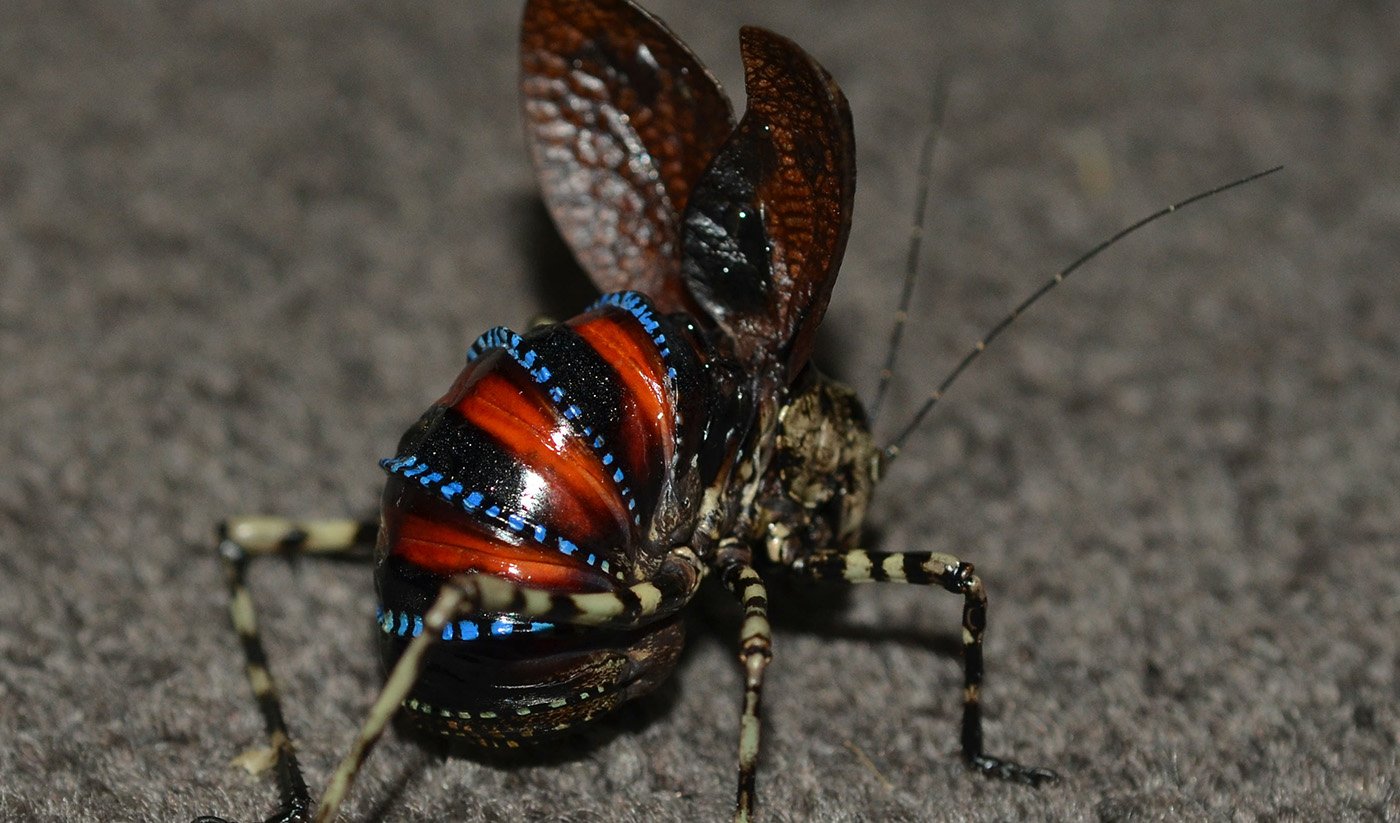 KATYDIDS ARE remarkable insects with an uncanny ability to blend into their surroundings. Even when they’re bright pink, they can look just like Autumn leaves or flower petals.

There’s even a katydid that looks exactly like lichen:

But one Australian katydid does something no other katydid on Earth does – if its dark brown exterior isn’t enough to deter a would-be predator, it’s got another trick up its sleeve.

Get too close, and the mountain katydid (Acripeza reticulate) will thrust its wings up into the air to reveal an intensely bright pattern of red, blue, and black stripes – an effective ‘startle display’ that cashes in on that age-old adage that in nature, bright colours = bad.

One of the leading experts investigating these fascinating species is Dr Kate Umbers, a lecturer in zoology and leader of the Invertebrate Conservation Lab at Western Sydney University.

She’s braving the Australian alpine regions to figure out why these little insects behave the way they do, and what she discovers could inform the science of why other animals use startle displays – and how effective it really is.

We chatted to Dr Umbers about her experience with Australia’s own “colourful gobstoppers”.

Bec Crew: How did you first get into researching the mountain katydid?

Dr Kate Umbers: I was working in the Snowy Mountains for my PhD, trying to understand why the chameleon grasshopper (or thermocolour grasshopper) changes colour with temperature. My fieldwork involved lots of hiking in Kosciuszko National Park, and every now and again, while walking along an alpine herb field or sub-alpine meadow, I’d come across ‘one of those huge, colourful katydids’.

I always stopped to look at it, and to show my field volunteers their exciting display. I’d always get a kick out of their reaction – most people are very surprised to see a ‘big black bug’ flash bright blue, red, and black stripes. During my PhD, I swore I’d return to work on these creatures, and that’s exactly what I did.

BC: Why do you think mountain katydids are so unlike any other species?

KU: Australia is well-known for giving rise to the weird and the wonderful, and as with other strange species, it’s unclear why these katydids are so different to others in their family (Tettigoniidae). They seem to have gone off an a morphological tangent.

Currently, with the help of Hojun Song at Texas A&M University, we are trying to sort out where mountain katydids sit in the Tettidoniid phylogenetic tree, so we can develop some clever hypothesis to explain, well, everything about them.

Our future work aims to figure out whether environmental characteristics such as type or diversity of predators, climate, isolation, or food plants might be driving the evolution of this bizarre colourful gobstopper.

BC: Can you describe their startle display?

KU: Imagine you’re a young Australian magpie, staring at a piece of wombat poo. It’s square-ish, brown, and not moving, but it looks kind of interesting for a reason that’s difficult to explain…

It’s late Summer in the Snowy Mountains, and there’s an abundance of insect prey available, so you’re not too worried about foraging and have time to investigate this strange object. You move towards it, nothing happens. You stand right next to it, nothing happens. You peck at it, and suddenly, the brown blob reveals a shock of red, blue, and black stripes underneath what you now see are its wings!

You’ve never seen anything like this behaviour in any other creature you’ve encountered, and it’s not clear if it’s safe to eat, so you decide to leave it alone in pursuit of easier prey.

The days shorten and cool as the alpine Autumn wears on, and sometime in late May, when the snow starts to fall, you encounter one of these creatures again. Only this time, the glut of insects you enjoyed weeks ago has all but vanished.

You’re hungry, and it’s one of the biggest insects in the Alps. You peck at it, it reveals its red, blue, and black stripes, but you are not deterred. You grab the insect in your beak, and immediately you taste something strange on your tongue. You drop the insect and inspect it again, where is the bad-tasting bit? You decide to gulp the bug down, for better or for worse, because you’re too hungry to miss this large meal.

You wait… and nothing happens. You feel fine. Could it be that all those deterrents were a bluff?

BC: What is the environment like where they’re found?

KU: Mountain katydids are primarily – though not exclusively – found in the high-mountain environments of eastern Australia. They can be found from the Tasmanian Alps to the Atherton tablelands behind Cairns, including Mt Lofty in South Australia. They can also be found in Queanbeyan, Melbourne, Brisbane, and as far west as Bourke in NSW and Lake Condah in Victoria.

I’ve focused on the alpine and sub-alpine populations of mountain katydids, spending every field season for the past 10 years in the NSW, Victorian, and Tasmanian Alps. It’s a pleasure and privilege to work in these places, but conducting field-based research is always challenging when you’re a long way from the city or university campus.

In the alpines, on the roof of Australia, we can encounter blizzards any time of year. We have to be bush-smart and well-prepared, because even places that are relatively close to ski resort infrastructure can be unforgiving if just one or two things go wrong.

But the rewards for long days hiking with low air pressure outweigh the costs almost every time – to be in big, wild places discovering things for the first time is deeply fulfilling, and it’s what drives all field biologists. It’s not easy, but going into the wild to see what happens there is the best way to discover the truth about the natural world.

BC: Can you tell me about the major project on mountain katydids that you’re about to start?

KU: At the end of last year, I was fortunate to be awarded an Australian Research Council Discovery Early Career Researcher Award. This prestigious award provides me with three years of funding to understand the inner workings of ‘deimatic defence’  or startle displays, like the one the mountain katydid has.

Startle displays are one of those traits that are well-known to the general public because they’re so striking and visually impressive, yet we have almost no scientific data on how they work and why the evolve. Startle displays are common across animals, from frogs to cuttlefish to insects, and I want to understand how well this strategy works against different kinds of predators; whether it’s always coupled with a real threat to the predator; and what circumstances drive its evolution.

This will require many hours of fieldwork, lots of genetics, and for me to get inside the minds of predators. I’m working in collaboration with researchers in Australia, Germany, Finland, the UK, and Canada to try and get to the bottom of these enchanting displays, and I can’t wait to get started!