This beautiful wasp is a parasitic killer

Bec Crew is a Sydney-based science communicator with a love for weird and wonderful animals. From strange behaviours and special adaptations to newly discovered species and the researchers who find them, her topics celebrate how alien yet relatable so many of the creatures that live amongst us can be.
ByBec Crew• January 15, 2018 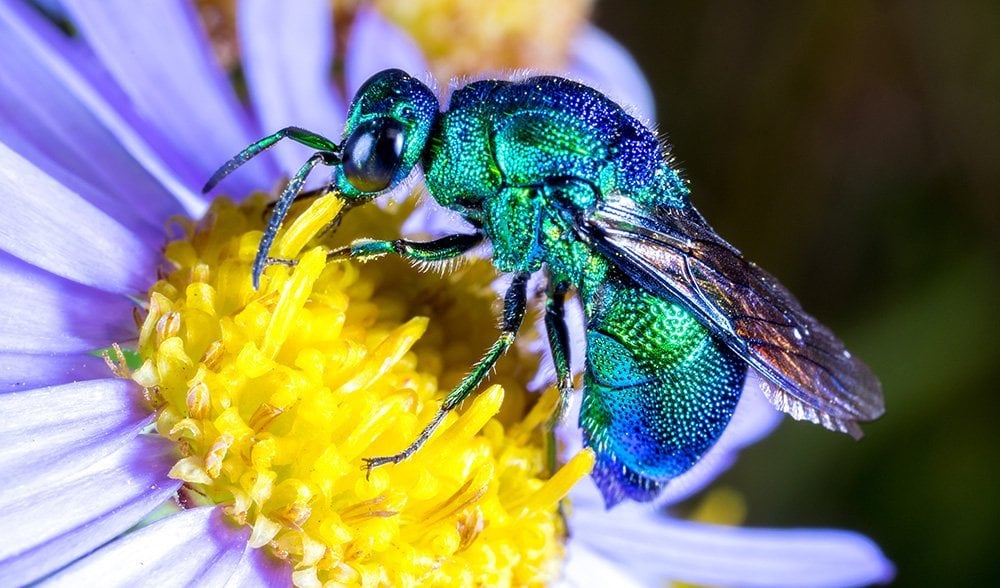 Image credit: Yunhyok Choi
Reading Time: 2 Minutes • Print this page
It must be one of the most beautiful insects we’ve ever seen, but you don’t want to get on the wrong side of one of these.

CUCKOO WASPS belong to a special class of insects that are even more sinister than parasites.

Parasites will just take what they can from their host, and if they can keep on taking for the rest of their (are their host’s) life, that’s enough for them.

But cuckoo wasps are called parasitoids – they feed on and actually kill their hosts. They’re also cleptoparasites, because they steal their host’s provisions before they kill them.

From the insect family Chrysididae – a group entirely comprised of various forms of parasites – cuckoo wasps are the only ones that look like this.

It’s not clear what, if any, purpose the metallic iridescence serves, but back in 2009, scientists discovered that this ‘lit from within’ quality comes from light refracting through open spaces between six layers of cuticle in their tough exoskeletons.

The surface of the cuckoo wasp’s exoskeleton is covered in tiny, dense pits, which gives them an almost glittery appearance. Want to get a better look at those pits? Check this out.

It’s clear to see why they’ve been nicknamed emerald or jewel wasps.

Like the cuckoo bird, cuckoo wasps will infiltrate the nests of other wasps and bees, and lay their eggs alongside their hosts’ offspring. Once these eggs hatch, the young cuckoo wasps larvae will feed on food stored in the nest for the host’s offspring, such as a paralysed spider or caterpillar.

When that food supply dries up, they’ll turn on the host’s offspring and eat those, too.

Cuckoo wasps from a number of different species are found all over Australia, with Stilbum cyanurum (the one pictured above) being the largest and arguably the most beautiful.

While our cuckoo wasps tend to be found in green, blue, or purple hues, in the Northern Hemisphere, they’ve also got red and gold cuckoo wasps, like this one, called Hedychrum rutilans, found in Brittany, France: If you’re lucky enough to spot one of these beauties in your background, don’t freak out too much about the prospect of a nasty sting – according to the Western Australian Museum, it’s not actually clear if our cuckoo wasps are capable of stinging, but it’s best to be wary around the big ones:

“Female cuckoo wasps are widely believed to be unable to sting, the sting apparatus being reduced and supposedly non-functional, yet cases are known where people have received painful stings from larger species. A long, thin appendage may sometimes be seen extending from the tip of the female abdomen. This is not a ‘stinger’, but an ovipositor used for inserting eggs into a nest of a host.”

If you want to see something incredibly cool, here’s a cuckoo wasp sleeping:

If 2008 can bring us anything, let it be a sleep as peaceful as that.