Bec Crew is a Sydney-based science communicator with a love for weird and wonderful animals. From strange behaviours and special adaptations to newly discovered species and the researchers who find them, her topics celebrate how alien yet relatable so many of the creatures that live amongst us can be.
By Bec Crew • December 3, 2017 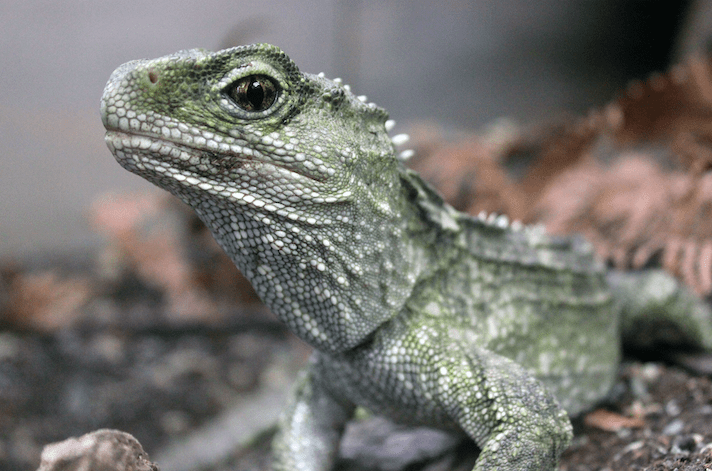 Image credit: Nga Manu Images NZ/Flickr
Reading Time: 3 Minutes • Print this page
It can live to more than 100 years and has a primitive third eye on the top of its head.

IT DECAPITATES birds with jaws full of saw-like teeth, and unlike most other reptiles, it can live in near-freezing temperatures.

And did we mention is can hold its breath for up to an hour?

New Zealand’s Tuatara is one of the strangest and most unique creatures on Earth, and the fact that it’s the last of its kind in a lineage as old as the first dinosaurs is just the beginning.

The bulk of the population lives across seven islands in Cook Strait, located between the main North and South Islands of New Zealand. There are about 45,000 Tuatara on these islands, and they are closely protected.

Another 10,000 Tuatara are spread across islands around the northern end of New Zealand’s North Island, safe from their biggest threat – rats – after successful eradication efforts.

Don’t call it a lizard

It might look like a regular old lizard, but when scientists were first classifying the species – (Sphenodon punctatus) – its bizarre skeleton set it apart as the sole member of the ancient reptile order Sphenodontia.

The other existing orders of the Reptilia class are turtles, crocodilians, snakes, amphisbaenians (‘worm lizards’), and lizards.

The surviving Tuatara species lived without incident in New Zealand’s dense island forests until European settlement began in the 1840s, and brought the devastation of Pacific rats with them.

Tuatara eggs take between 12 and 15 months to hatch, which was more than enough time for the rats to almost eat them out of existence.

But thanks to conservation efforts over the past few decades, the Tuatara are actually faring quite well, with several very successful breeding programs being run in zoos and museums across the country. Tuatara were named by the Māori for the spiny ‘peaks’ that run along their backs, but perhaps their most intriguing feature is the third eye that sits on the top their head.

This eye is known as a parietal eye – it’s far more primitive than a regular eye, but it still has a lens and a retina, and is photosensitive, meaning it can sense light. Parietal eyes are also found in many species of burrowing lizards, as well as some frog species and lampreys, and fish like tuna, and some sharks. Other strange features include their teeth – Tuatara have a single row on their lower jaw, and two rows on their upper jaw, and this unique configuration is one of the main things that separates them from the lizards.

When they eat, their bottom row of teeth slots in between their two upper rows, and instead of moving up and down in a chewing motion, the lower jaw moves forwards and backwards against the upper jaw, slicing the Tuatara’s prey like a saw.

Locals are used to seeing the damage these saw-like jaws can cause – headless bird corpses are not uncommon near Tuatara nests.

What kept this species around long enough to saw the heads off birds for millions of years is its incredible suite of survival mechanisms.

The Tuatara has a unique type of haemoglobin in its blood that allows it to survive in temperatures just a few degrees above freezing, and it can hold its breath for up to an hour if it needs to.

It all adds up to a species that can live in the wild for more than a century – although, when it takes up at 14 years to mature and a whopping 35 years to reach its full size, that leaves plenty of time for rats to pick off the little ones…

Here’s BBC Earth on the amazing (and cannibalistic!) Tuatara: