This tiny vampire deer has fewer chromosomes than a fruit fly

With protruding fangs and taste for corpses, the diminutive Muntjac deer cuts an eerie figure in the forests of Indonesia and southern Asia. 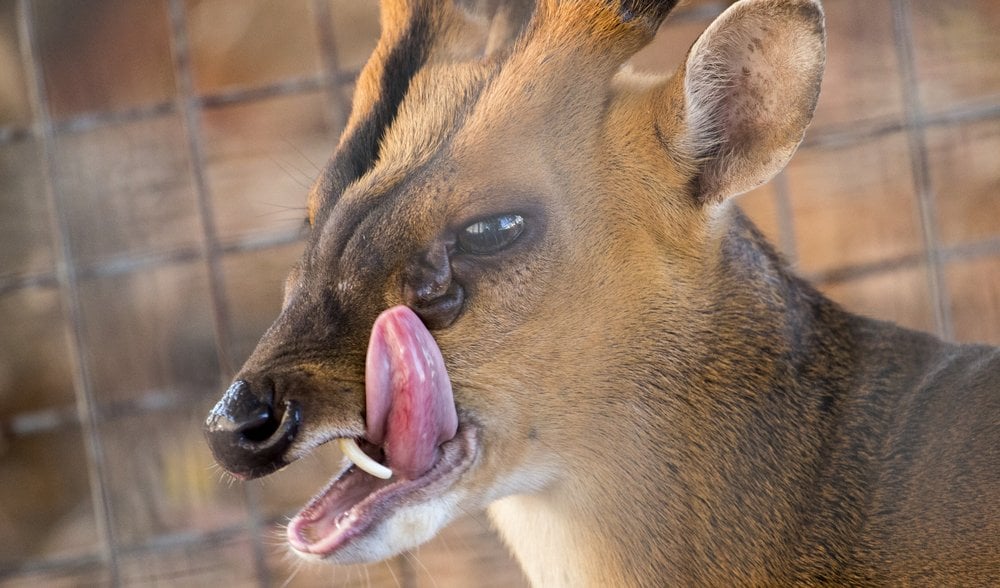 A close-up of a Muntjac deer. Image credit: Mauro Rodrigues

BUT ITS vampiric traits aren’t even the strangest thing about it. Not only is the Muntjac the most ancient deer on the planet, it’s also got the lowest chromosome count of any other mammal.

In fact, it’s got fewer chromosomes than the lowly fruit fly.

There are 12 known species of Muntjac deer, and the most common species, the Indian Muntjac (Muntiacus muntjak), has the dubious honour of being one of the most widespread but least known mammals in Southeast Asia.

Indian Muntjac are about the size of an Australian kelpie, with short, curled antlers that are carried on their foreheads by bony ‘pedicles’ – stalk-like structures that extend down the face to form a pair of dark ridges.

In the males, these antlers are just a few centimetres long, and you can see them sitting atop the pendicle stalks here:

Once a year, the Muntjac males will shed the curled tips of their antlers, like you can see on this rare albino male: The females don’t grow antlers – they just have small, bony knobs instead.

Nicknamed the ‘barking deer’, Muntjac will cry out when they sense a nearby threat, releasing a low, barking call for up to an hour, in an effort to scare off any would-be predators.

If that doesn’t work, Muntjac can defend themselves using their antlers, but their tusk-like canine teeth are a more formidable weapon – the males will even use these fangs on each other if they find themselves in a territorial scuffle.

Ancient remains found in three sites across Europe suggest that Muntjac deer have existed for up to 35 million years. During that time, something peculiar happened to the Indian Muntjac.

While species like the Reeves’s muntjac (Muntiacus reevesi) boast up to 46 chromosomes (the same number as humans), Indian Muntjac have just six chromosomes in the females, and seven in the males.

Fruit flies, on the other hand, have eight chromosomes.

So how did the Indian Muntjac survive millions of years with so few chromosomes?

A lack of chromosomes doesn’t necessarily result in less genetic material overall – through many generations of evolution, the species has been creating ‘super’ chromosomes by fusing regular chromosomes end-to-end.

According to a study published in 2000, Muntjac are able to do this because they have specialised chromosomes that contain uniquely ‘sticky’ ends (or telomeres) that actually encourage this kind of fusion.

Biologist David Ray from Texas Tech University in the US compares this to smashing two books together to form a much larger tome – the information is all still, but it’s now contained within one book jacket instead of two.

And having fewer, larger chromosomes to replicate during cell division could actually be an advantage for the Indian Muntjac, making the risk of mistakes less likely than if you have lots of smaller chromosomes to copy perfectly from one generation to the next.

After all, potatoes have 48 of them.

I’ll leave you with some footage of a Muntjac male being adorable: