The strange tale of the bobbitt worm

Bec Crew is a Sydney-based science communicator with a love for weird and wonderful animals. From strange behaviours and special adaptations to newly discovered species and the researchers who find them, her topics celebrate how alien yet relatable so many of the creatures that live amongst us can be.
ByBec Crew• June 19, 2015 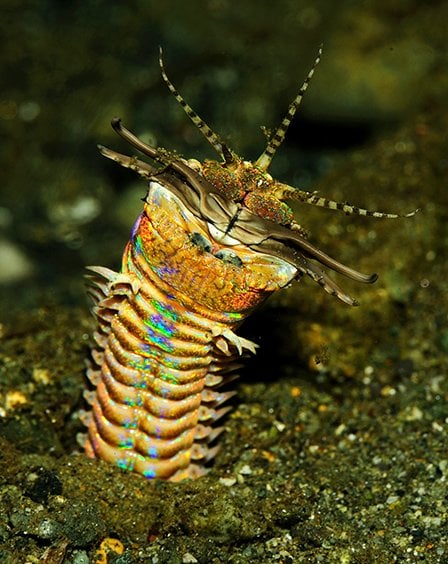 THIS IS Eunice aphroditois, commonly known as a bobbitt worm. With mouthparts so sharp they can bisect their prey with ease, these iridescent assassins were thought to be named after an incident in 1993 in which American women Lorena Bobbitt infamously sliced off an important appendage of her husband.

Strangely enough, the connection between the gruesome act and the bobbitt worm is tenuous at best. A 2011 paper in the journal Revista de Biología Tropical cites the resemblance of the worm’s open jaw pieces to scissors or its body’s vague resemblance to an erect penis as possible explanations for the species’ common name, but neither of these make much sense, as scissors have nothing to do with the Bobbitt incident, and, well, a lot of things can look like an erect penis if you really want them to.

And the irony here is that bobbitt worms don’t even have a penis at all – they are ‘broadcast spawners’, which means the males eject their sperm into the surrounding water in the hope that they come into contact with a nearby female’s free-floating eggs.

Found commonly in the warm waters of the Indo-Pacific and Atlantic Oceans, including off the eastern and southern coasts of Australia, the bobbitt worm keeps to its burrow in the sea floor at depths of between 10m and 40m.

Using the five antennae on its head to sense the movement of its prey, such as smaller worms, snails, and fish, the bobbitt worm emerges from its burrow quick-as-a-flash, and snatches up its victim using a complex feeding apparatus called a pharynx.

Capable of folding itself inside out like a glove, the pharynx is tipped with strong, sharp mandibles that can slice right through unsuspecting prey – and the fingers of unfortunate pet owners – with ease. Once the prey has been sliced into submission, this long-living, nocturnal worm will shoot back into its burrow to devour it.

A scavenger and an omnivore, the bobbitt worm will also feed on seaweed and other marine plants, and when prey is scarce, will scavenge for morsels around the entrance of its burrow.

Along with its gorgeous colours, which range from a dark brown to a golden red, with stunning purple iridescence, the bobbitt worm is known for its ridiculous length. Since the 19th century, scientists have recognised it as having one of, if not the, longest bodies among the polychaete worms. They grow to an average length of 1m, but certain individuals measuring a whopping 3m long have been discovered in the waters of the Iberian Peninsula, Australia and Japan.

VIDEO: A bobbit worm takes on a lionfish – and wins.