Bec Crew is a Sydney-based science communicator with a love for weird and wonderful animals. From strange behaviours and special adaptations to newly discovered species and the researchers who find them, her topics celebrate how alien yet relatable so many of the creatures that live amongst us can be.
By Becky Crew • February 27, 2015 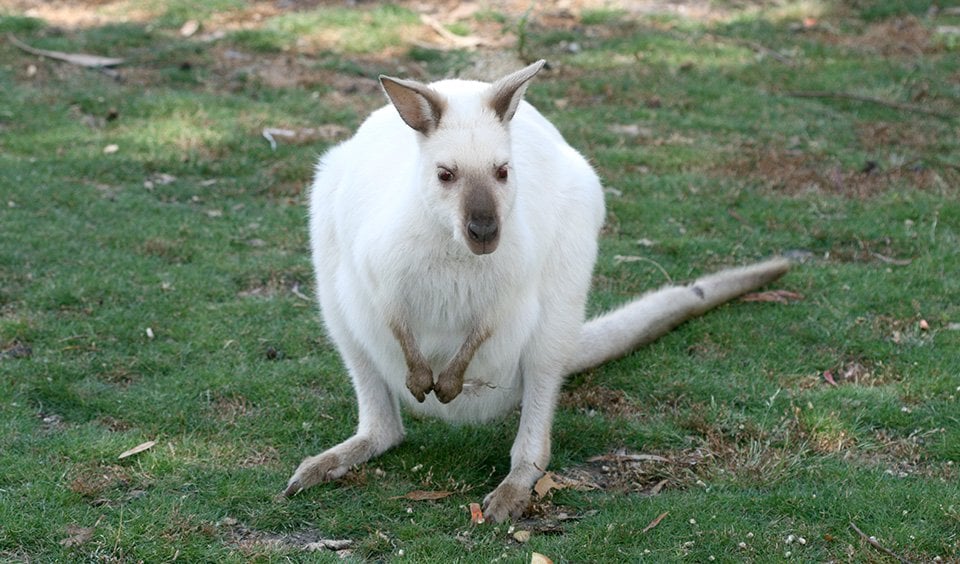 IT’S PROBABLY A SURPRISE to exactly no one that this is no ordinary wallaby. Not only is she snow white where she should be a rich, ruddy brown, but as you can tell from her dark eyes, she’s not even albino. In fact, when it comes to Tasmania’s Bennett’s wallabies (Macropus rufogriseus rufogriseus), being albino would actually make them less remarkable than how this pretty lady turned out.

She belongs to a small population of Bennett’s wallabies that live on Bruny Island, about 50km south of Hobart, near the Fluted Cape entrance to the South Bruny National Park. Here, the wallabies breed and sustain this very rare white variant, while separate, albino populations are spread more widely across the island.

While Bennett’s wallabies are also found on the Australian mainland, they’re different enough from each other to be separated into two subspecies: Macropus rufogriseus rufogriseus from Tasmania and its surrounding islands, and Macropus rufogriseus banksianus, common to the coastal bushlands of southeastern Australia. The Tasmanian subspecies was officially separated from the mainland variant in 1979, when genetic testing revealed that they’d evolved a much thicker, woolier coat to get them through the chillier climate.

You know what else separates these two subspecies? The fact that the Tasmanian Bennett’s wallabies have been caught getting super-stoned in a number of the state’s poppy fields.

As the supplier of around half the world’s legally grown opium – used for opium and other types of painkillers – Australia has a bunch of poppy fields, and in 2009, Tasmanian poppy farmers started reporting the appearance of strange ‘crop circles’ running through their supply.

“The one interesting bit that I found recently in one of my briefs on the poppy industry was that we have a problem with wallabies entering poppy fields, getting as high as a kite and going around in circles,” the attorney general for Tasmania at the time, Lara Giddings, said in a statement. “Then they crash. We see crop circles in the poppy industry from wallabies that are high.”

Why circles? It’s not entirely clear why a wallaby high on opium might end up grazing in circles, Rick Rockliff, a spokesman for poppy producer Tasmanian Alkaloids, told the ABC that while wallabies aren’t often caught in the poppy fields, they’d occasionally see sheep breaking in and behaving in much the same way. “There have been many stories about sheep that have eaten some of the poppies after harvesting and they all walk around in circles,” he said.

Nobody tell this albino Bennett’s wallaby joey. He’s far too sweet to be hooning around in the poppy fields: