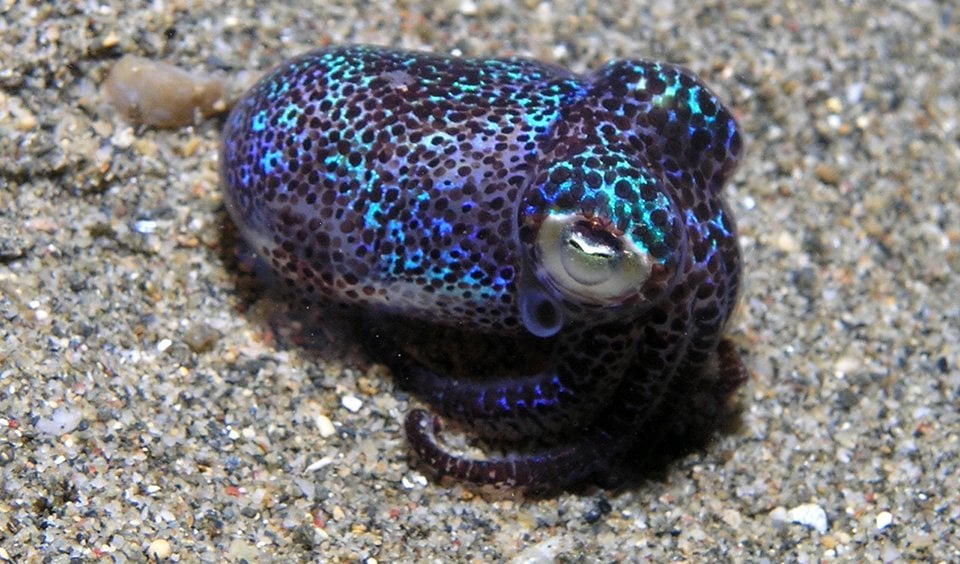 Meet the fancy little hummingbird bobtail squid (Euprymna berryi), a compact species of mollusc that’s spread throughout the Indo-Pacific region, from Indonesia to right up near the East China Sea.

Along with 10 other known species, the hummingbird bobtail squid belongs to the genus Euprymna, the taxonomy of which is so ill defined, no one can really say how many we actually have living in our oceans. But what we do know is they’re common enough around the coast of China and Taiwan to sustain local fishing trades.

Not that one of these glittery squids would make much of a meal on their own. With an average mantle length of about 3cm, a male hummingbird bobtail squid is no bigger than a 50-cent coin. The females are significantly larger, but still small – measuring just 5cm long, not including their arms.

Bobtail squid maintain their stunning glow thanks to a symbiotic relationship with a species of bioluminescent bacteria called Vibrio fischeri. These microscopic organisms set up shop in a special chamber in a bobtail squid’s mantle called the ‘light organ’ – along with a trillion or so relatives.

All tucked away inside a bobtail squid, these bacteria remain out of harm’s way while keeping themselves fat and happy on a sugar and amino acid solution that their host readily secretes.

In return, the light produced by the bacteria actually helps hide a bobtail squid from its own predators thanks to a strategy known as counter-illumination. This is because its light organ contains special filters that can alter the wavelength of the luminescent light to match that of moon- or starlight, which beams down on the ocean when it comes out to hunt.

The organ then diffuses this altered light so it emanates from the squid’s undersides, and when a predator looks up from below, instead of seeing a distinct black blotch, all it sees is a faint shadow, barely visible against the natural glow of night.

Here’s one of the hummingbird bobtail squid’s close relatives burying itself in the sand like a pro: