The burrowing spotted pardalote is among Australia’s smallest
Springtails are kinda cute?
The blue-crested lizard is colour-changing marvel
default

These pretty native bees are important pollinators for Australian crops. 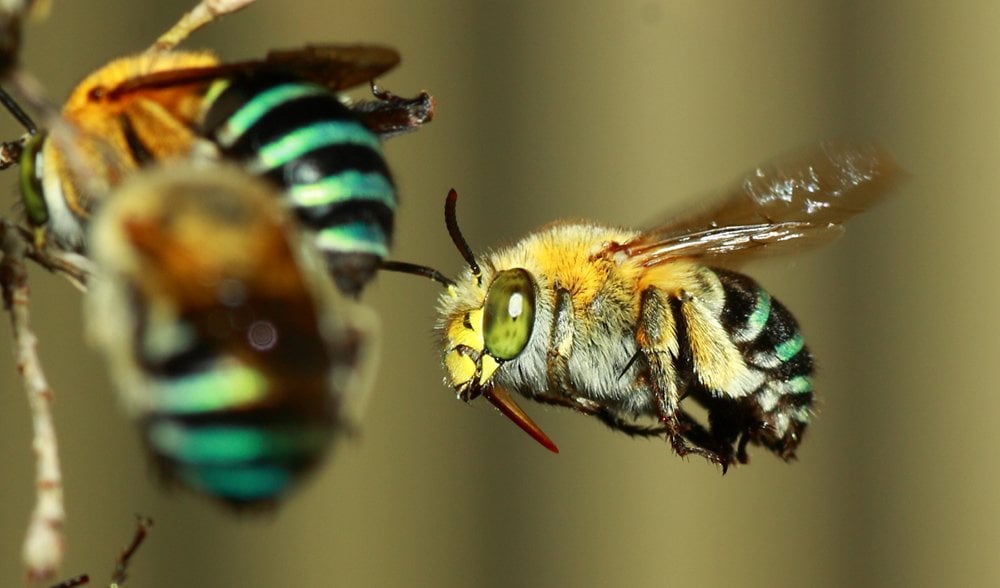 THIS HAS TO BE one of the prettiest bees in the world. Named for the beautiful turquoise bands that run across its abdomen, the blue-banded bee (Amegilla cingulate) sports a lush golden and white fluff, enormous green eyes, and tan-coloured wings that look like crisp layers of cellophane.

Males can be distinguished from females by the number of blue bands they display – males have five while the females have just four. Adult blue-banded bees typically grow to between 10mm and 12mm.

The species is found all over Australia, except in Tasmania and the Northern Territory. It’s also native to Papua New Guinea, Indonesia, East Timor, Malaysia, and India, so it enjoys a pretty healthy range, spreading out everywhere from urban areas to open fields and dense, tropical forests.

It’s rumoured they’re attracted to blue and purple flowers, perhaps because they could blend into their surroundings when collecting pollen from them, but this has yet to be proven.

They are known to frequent lavender plants, however, and according to the Australian Museum, they appear to be attracted to people in blue clothing. But it’s cool because these bees are non-abrasive, and don’t move around in intimidating swarms like other species, they live solitary lives in little burrows in the soil or the crevices of rocks.

Blue-banded bees are one of a few native Australian bee species that perform a particular type of pollination known as ‘buzz pollination’. Also known as sonication, this type of pollination is really useful on crops such as tomatoes, blueberries, cranberries, kiwi fruit, eggplants and chilies, but the well-known and very common western honey bee (Apis mellifera), is incapable of performing this process. For this reason, the blue-banded bee is extremely valuable to Australian farmers.

A flower’s stamen is its pollen-producing reproductive organ, and attached to the stamen is the anther, which is a one or two-lobed formation that holds onto the pollen. In some plants, the pollen is held so firmly by the anthers that it needs a little extra help breaking free, which is where solitary bees like the blue-banded bee come in handy.

These bees will grab onto the flower, and shake their entire bodies rapidly, causing both the flower and its anthers to vibrate. This shaking movement causes the pollen to be dislodged from the anther, and then be collected by the bee.

According to the University of Nevada’s Leonard Lab in the US, about 8 percent of the world’s plants need to be buzz pollinated in order to reproduce.

Here’s an awesome video showing some blue-banded bees hanging out in Brisbane, looking like pretty turquoise jewels on a branch:

See more
The burrowing spotted pardalote is among Australia’s smallest
Springtails are kinda cute?
The blue-crested lizard is colour-changing marvel
Check out the melon on the megamouth bee
The bird-dropping spider is the best
The Australian ghost bat is the sweetest (almost) vampire
Beware the jack jumper ant
The golden-mouth sea squirt is all kinds of nutty
Is the peacock-pheasant’s iridescent plumage more than meets the eye?
The whitemargin stargazer is all of us right now
The common black house spider: a case of mistaken identity
The brown booby is a sophisticated seabird
Meet the venomous mottled cup moth caterpillar
Have a look at this beauty: Steve Irwin’s turtle
The elegant squat lobster has some wacky friends