A close relative of the recently declared Australian humpback dolphin, the Hong Kong pink dolphin is at risk of extinction

<p>Bec Crew is a Sydney-based science communicator with a love for weird and wonderful animals. From strange behaviours and special adaptations to newly discovered species and the researchers who find them, her topics celebrate how alien yet relatable so many of the creatures that live amongst us can be.</p>
ByBec Crew• August 28, 2014 • Reading Time: 2 Minutes • Print this page 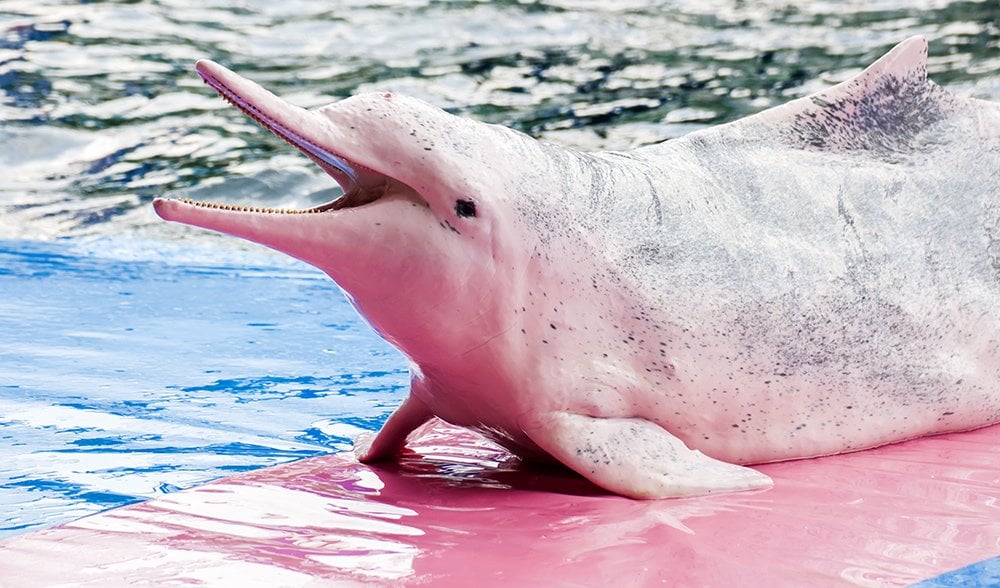 A pink variety of the Indo-Pacific humpback dolphin, which is found around Hong Kong and southern China. Image credit: wasanajai/Shutterstock

THIS BIZARRE CREATURE is an Indo-Pacific humpback dolphin (Sousa chinensis), found throughout Southeast Asia, including off the coast of South Africa, China and Hong Kong.

Its cousin, the Australian humpback dolphin, which swims along the northern Australian coast, was considered part of the chinesis species until recently, when it was determined to be a distinct species, Sousa sahulensis.

Because the species’ range is so extensive, several populations have developed their own distinctive physical characteristics, the most intriguing of which is an incredible pinkish hue.

This strange colouring is unique to the South China Sea population of China and Hong Kong, and some scientists consider these dolphins to be so different from the rest of the Indo-Pacific humpback dolphins, they’ve been named the Chinese white dolphin, and placed into the subspecies Sousa chinensis chinensis.

The pastel pink flesh of the Chinese white dolphin isn’t a permanent characteristic – they’re actually born with black skin, which quickly fades to a greyish colour covered in clusters of pink spots as they age.

Once they reach adulthood, they’ll take on a ghostly shade of white. And just as our cheeks go red after a run or a tough session at the gym, these dolphins turn pink all over when they’re active, thanks to a mechanism known as thermoregulation.

Thermoregulation is maintained by an array of super-active blood vessels located just under the surface of the dolphin’s skin, which dilate when it’s exerting itself, perhaps by chasing its prey or leaping into the air. This allows the blood to move the heat from inside the dolphin’s body to the surface of the skin where it’s radiated off to keep the internal temperature cool. So that pink hue is basically an intense, all-over flush.

With all that adorable pink lumpiness, it’s not hard to see why the Chinese white dolphin has been nicknamed ‘hoi tuen’ in Cantonese, which means ‘sea pig’. And unlike in English, where ‘pig’ is often intended as an insult, in this context, the name is entirely affectionate.

Despite the fondness of the Hong Kong people in particular for their pinkish-white dolphin – in 1997, it was chosen as the symbol for Hong Kong’s retrocession from China – the population is in serious danger thanks to the heavily polluted waters they call home.

According to Hong Kong DolphinWatch, an ecological tour group and research organisation, “about 450,000 cubic metres of raw, semi-processed sewage is dumped into the harbour every day, enough to fill 200 Olympic-size swimming pools.”

It’s thought that while the adults have adjusted to the high concentrations of sewage and mercury being flushed into Hong Kong’s coastal seawater every day, the pollution is contaminating the females’ milk, which ends up killing many juvenile Chinese white dolphins.

The population’s fate now rests with a handful of Hong Kong-based conservation groups that are continuing to lobby local governments for tougher regulations related to coastal dumping.