Kirsten Banks is a Wiradjuri astrophysicist and science communicator who loves to share her love for space and astronomy.
By Kirsten Banks • December 17, 2020 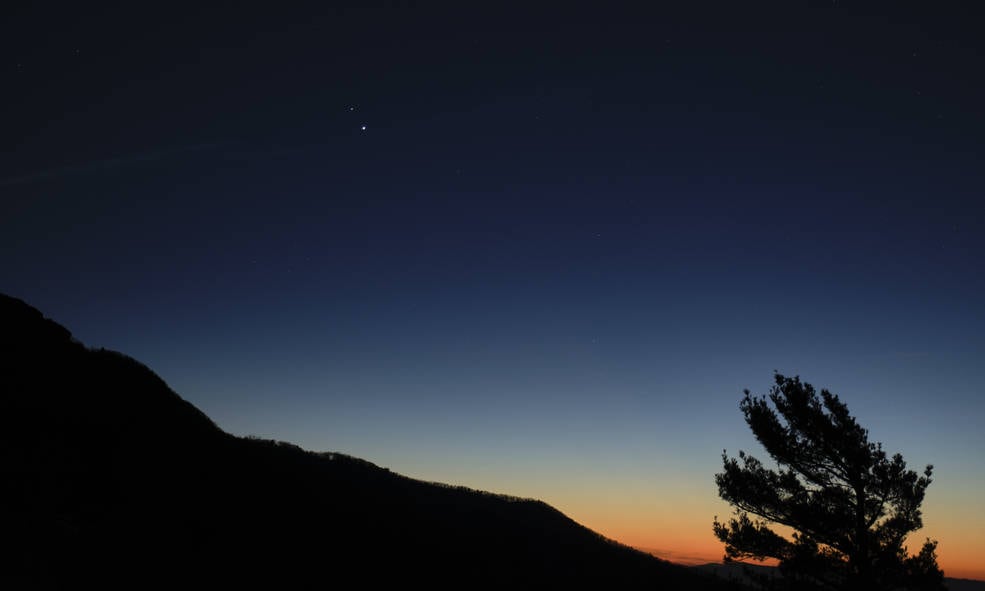 Saturn, top, and Jupiter, below, are seen after sunset from Shenandoah National Park, Sunday, Dec. 13, 2020, in Luray, Virginia. Image credit: NASA/Bill Ingalls
Reading Time: 4 Minutes • Print this page
Jupiter and Saturn meet in the sky for a great conjunction approximately once every 20 years at varying distances and we get to see that on December 21st.

Over the last few weeks, you may have noticed two bright objects in the sky slowly getting closer and closer together.

Two cosmic friends within our Solar System, Jupiter and Saturn, have been gradually approaching each other for a big planetary hug from our perspective on the Earth.

An astronomical event like this, when two planets meet in the sky, is generally called a conjunction but this one between Jupiter and Saturn is called a great conjunction.

Much like how we map the Earth on a grid of latitude and longitude we also map the sky on a similar grid with right ascension and declination which is equivalent to lines of longitude and latitude respectively.

Unlike stars, planets move dramatically across this grid as they, and us on planet Earth, orbit around the Sun. A conjunction between two planets occurs when both planets have the same right ascension.

Jupiter and Saturn orbit around the Sun at a larger distance than the Earth so they take longer to circle the Sun compared to our planet. Jupiter completes an orbit in just under 12 years, while Saturn does the same in a little under 30 years.

This means that Jupiter and Saturn meet in the sky for a great conjunction approximately once every 20 years at varying distances and we get to see that on December 21st.

This great conjunction, however, is special because it’s the closest Jupiter and Saturn have been since 1623.

While most of the planets orbit around the Sun on approximately the same plane they aren’t exactly the same so when Jupiter and Saturn approach each other in the sky, they aren’t always as close as they will be this year.

During the last great conjunction, Jupiter and Saturn were separated by a little over 1° in the sky which is a bit wider than two full moons.

This year, Jupiter and Saturn will be separated by just 6 arcseconds which is less than a fifth the width of the moon! They will be so close that they will almost appear to be one point of light in the sky.

Even though Jupiter and Saturn will appear to look really close together, they’ll still be very far apart in space. Despite looking like they’re going to collide, they’ll actually be separated by more than 700 million km! Let’s just say that our depth perception doesn’t work very well beyond the Earth.

Over the next few days, Jupiter and Saturn will appear to get closer and closer together and will be at their closest on the evening of the 21st of December.

Jupiter and Saturn have been hanging out in the western sky after sunset and setting below the horizon a few hours after the Sun. So, as long as clouds stay away, get yourself to a place with a good view to the West and you’ll be able to see the bright pair not long after the Sun has set.

Do I need special equipment?

Now, you may be thinking, “Do I need to use any special equipment, like binoculars or a telescope?” The answer is no, but it certainly doesn’t hurt!

Depending on the power of your binoculars you’ll possibly be able to make out Jupiter’s Galilean Moon and maybe even Saturn’s rings!

I myself, have a little 5” computerised telescope that I’ll be using to look at the planetary pair which will easily be able to see both Jupiter and Saturn at the same time!

If you also own a telescope and it can easily fit the entire Full Moon within the view, then you should have no problem being able see both planets at the same time. Let’s hope that those clouds stay away.

And if the clouds do come to rain on our astronomical parade, don’t fret! Jupiter and Saturn will appear this close again in March 2080.