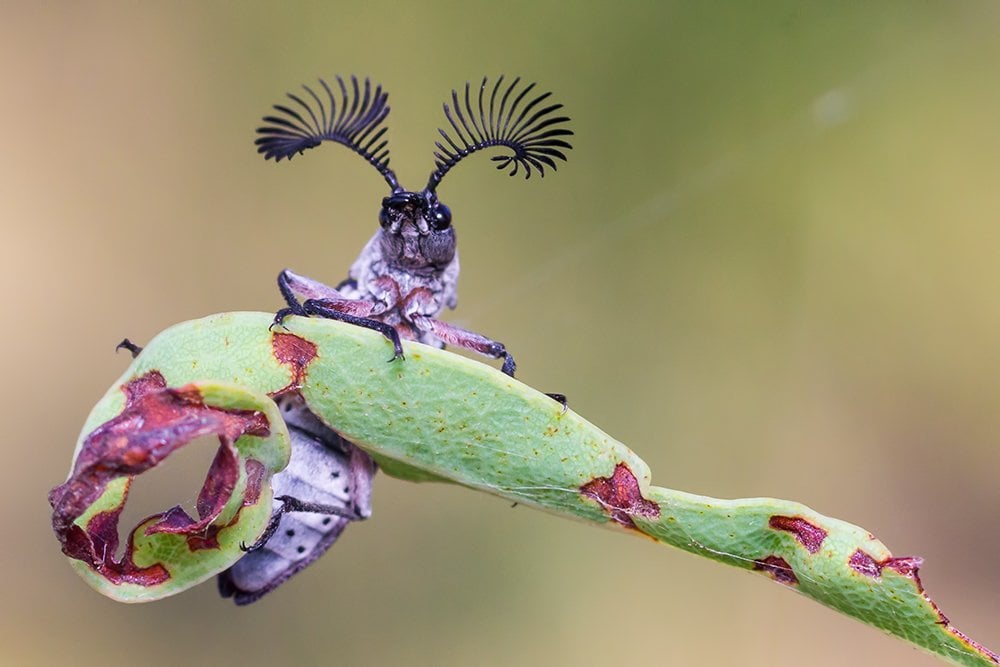 Teale, who is studying a Masters degree in science, enjoys photographing many different aspects of nature. However, he particularly loves taking images that show aspects of the universe that aren’t immediately apparent to the naked eye – be it a tiny arthropod or distant planet. Surprisingly his major has nothing to do with small beetles, but is rather at the other end of the size scale – in astronomy.

“This image is a male feather-horned (or fan-horned) beetle (Rhipicera femorata) that I took recently at Boynedale Bushcamp – which is a picturesque location in the upper reaches of Lake Awoonga, about an hour south of Gladstone in the Boyne Valley, Queensland.

Feather-horned beetles are about 1cm in length, and on the couple of occasions that I’ve found them, they’ve been clinging to the top of grass in fairly open areas. On this particular day, though, there were literally hundreds of them gathering in quite a small area. They could be seen clinging to the grass and the trees, as well as flying through the air – I even had three or four land on me as I was taking photographs! It was definitely the first time I’ve had to remove beetles from my beard!” says Teale.

“The image was taken using fairly modest equipment – a Canon 600D DSLR, a Canon 55-250mm F/4-5.6 lens (yep, one of the kit lenses) and a set of cheap extension tubes. While my set allows me to use auto-focus, I never actually use it for macro shots – manually focusing is much less frustrating. I also used a hotshoe-mounted Speedlite and cheap diffuser for lighting the beetle. The exposure settings for the image were: 1/200sec @ F/8.0, ISO 400.”