The science behind the frill of the frillneck lizard

Scientists are discovering why our frillneck lizard has one of the animal world’s most dramatic displays.
By John Pickrell • August 9, 2019 • Reading Time: 6 Minutes • Print this page 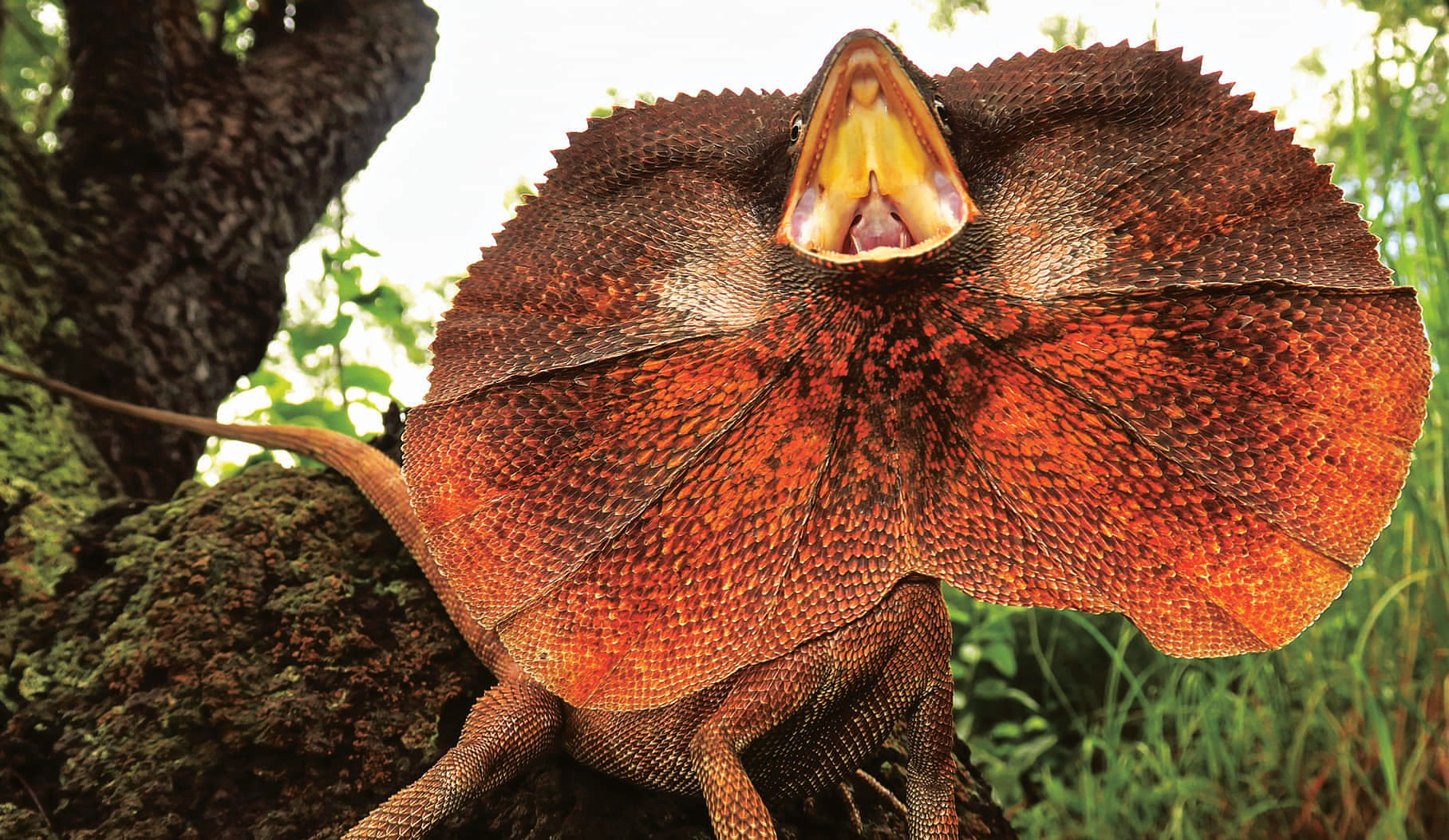 IT’S MOSTLY BLUFF and bluster, but a frillneck lizard’s display when it’s disturbed can still be surprisingly intimidating.

Open-mouthed, with its dinner plate-sized, bright-red frill erected around its neck like a scaly umbrella, a ‘frilly’ lunges and hisses at biologist Christian Alessandro Perez-Martinez at Fogg Dam Conservation Reserve, on the Adelaide and Mary river floodplains in the Northern Territory.

Between lunges, it sways back and forth and makes loud cracking sounds by whipping its tail. Eventually, it turns and scampers off on its hind limbs to scramble up the nearest tree.

“This dramatic performance aims to deter predators, or at least momentarily overwhelm them, so that the frillies can escape,” Christian says. “Even though frillies aren’t dangerous to humans, their behaviour definitely makes you think twice.”

Christian is a visiting researcher in The Lizard Lab at Macquarie University, Sydney, where he’s been working in collaboration with Associate Professor Martin Whiting. He’s been carrying out some of the first field research on these enigmatic lizards, which are common across the tropical savannah and woodlands of northern Australia and New Guinea.

Although an adult male here is rarely bigger than 75cm in length and 750g in weight, collecting the data Christian needed on the lizards’ colour and anatomy was more difficult than he expected it to be.

“The frillies would constantly lock eyes with me and frill up, and on several occasions managed to get a good tail-whip to my face,” he says.

During 120 days in late 2017 and early 2018, he carefully captured 53 animals to run behavioural trials in an enclosure, where he recorded the lizards’ responses to models of predators, hoping to figure out, once and for all, precisely how their display works.

IT MAY SEEM obvious that the display is to scare predators, but until Christian’s study, no-one had properly investigated how it works in the wild. Indeed, when scientists first turned their attentions to frillneck behaviour about three decades ago there were many outlandish suggestions about the frill’s purpose.

“[It’s] the largest and most dramatic display structure seen in any reptile,” says University of Sydney reptile expert Professor Rick Shine, who was the first to conduct a detailed field study of frillneck ecology and behaviour.

Before that, there wasn’t a single scientific paper on frillneck biology, although there were many colourful explanations for the frill’s purpose.

“Different theories on the evolution of the frill have been thrown around for decades,” Christian explains. “It was initially hypothesised that the frill might be used by lizards to parachute down from the canopy, but this theory and others, such as a role in thermoregulation [body temperature control], don’t appear to hold true.”

Between the 1880s and 1930s, various naturalists proposed not only that the frill might be used for warming and cooling, or gliding down from trees, but also for food storage, amplifying distant sounds or attracting mates.

Rick showed that two common theories, relating to predator deterrence and social interaction, did appear to hold true. He found that adult males were heavier, had proportionately larger frills than females and displayed more often than females and juvenile males.

It suggested the frill played a role in competition between males by warning rivals off from entering a male’s territory, which is roughly 2ha.

Frillies are agamids – members of family Agamidae, which are commonly known as dragons. These typically have complex social interactions, communicating with each other using behaviours such as head-nods, arm-waves and push-ups. They tend to pick elevated sites to display to each other. Frillnecks are large lizards, adults are often growing longer than 80 cm, including the tail. The frill is carried flat, as this one is, until needed. (Image credit: Australian Reptile Park)

“The frilly has just taken that to a whole other level,” Rick says. “They’re one extreme of a very persistent theme within the dragons, which is that they’re very territorial and use vision to communicate.”

In Kakadu, at least, frillnecks prefer open woodland with small trees, where they can perch on a branch a metre or so from the ground.

“A male can sit on his tree and, if he starts slapping his tail and doing push-ups and flapping the frill, it’s visible for a prolonged distance to another male who’s got terrific eyesight,” Rick says.

THE COLOUR OF the lizard’s frill is another topic that has interested researchers.

“It has been known for some time that there’s variation in frill colour across their range, going from red in the west, grading from orange in the NT, and yellow in northern Queensland and New Guinea, to whiter in southern Queensland,” says Dr Mitzy Pepper,
who studies evolutionary relationships among reptiles at the Australian National University, in Canberra.

Mitzy led a team that looked at the DNA of 83 frillnecks from across the species’ range to see if colour differences were linked to significant genetic variations.

“It was unknown if these different colour variations might also be genetically distinct, and whether or not we had more than one species,” she says.

The results, published in 2017, showed frillnecks can be separated into three different genetic groups with slightly different DNA. These are consistent with different frill colour, but not genetically different enough to be separate species.

Mitzy believes this is because different populations have remained well connected in recent evolutionary history, helped by the land bridge that connected northern Australia and New Guinea 18,000 years ago, when sea levels were lower and savannah stretched across the Torres Strait.

“This was a very interesting result,” she says, “because there are countless examples of other lizards with very deep genetic divergences across this part of Australia.”

Claire McLean, in the Devi Stuart-Fox lab at Melbourne University, has been exploring the physiology behind this and how frillnecks produce the pigments behind their colour.

Both red and yellow pigments are carotenoids: frillnecks acquire these from their insect diet and concentrate them in their skin. This implies frillnecks with brighter frills are healthier and stronger, with better diets, than those with less vividly coloured frills.

Red carotenoids, such as those that give flamingos pink plumage, often come from shrimps or algae.

“Because it’s costly to produce skin colour using red carotenoids, it’s thought this could be an honest signal of an individual’s quality,” Claire says, explaining that redder individuals are likely to be more fearsome competitors and better mates. Her work now aims to understand the genetic basis of how the different pigments are produced.

THE FOCUS OF Christian’s research has been how the sudden erection of the frill, and the behaviours that go with that, can be used to frighten off predators.

“We’re still in the data-analysis phase, but it seems that the defensive behaviour is what we would expect from a deimatic display,” he says.

Deimatic displays are typically used by reptiles as a last line of defence against an attacking predator (see Wild Australia, AG 146), intended to startle and confuse an attacker.

To this end, they are often swift, highly conspicuous and over quickly. They’re mostly bluff, but work well against predators that depend on the element of surprise to catch prey, such as birds and snakes.

Currently based in the USA, Christian is planning to return to Australia for more fieldwork, this time measuring the reactions to the lizards’ display of predators such as hawks.

“This could ultimately break down the deimatic display, to see what elements are effectively broadcasted to stall or halt the incoming threat,” he says.

Rick looks back fondly on his work on frillies during the 1980s, and often still encounters them during fieldwork on other species.

The species’ ability to walk at a leisurely pace on its hind legs particularly appeals to him.

“One of the lizards I was watching, on a little tree, saw a beetle walking past. He scurried down to the ground and grabbed it,” he says. “But the bit that astonished me was that, as soon as he got back to the base of the tree, he reared back and walked across on his hind legs. Very few animals do that, and it’s hilarious.”

While many lizards run on their hind legs, they need to get up a fair speed to do so. Rick speculates that because frillies have evolved such a long neck to accommodate the frill, they can lean back and get it into such a position that they are unusually stable on their hind legs.

For many years, numbers of frillneck lizards have seemed relatively secure and the species’ IUCN (International Union for Conservation of Nature ) threatened status is currently listed as ‘least concern’. However, Rick says that recently there has been evidence of worrying declines across parts of the species’ range.

The cause is currently one of the most important unanswered questions about the species.

Rick thinks changing fire regimes and vegetation communities, driven by the spread of invasive grasses that burn very intensely, could be part of the problem, but there have also been reports of frillnecks dying after eating cane toads.

For Christian, observing a frillneck in the wild in the NT for the first time was an emotional experience.

“They are quite charismatic, extremely aware of their surroundings and quick to perceive any movement or sound,” he says. “Since I was very young, I’ve wanted to encounter a frilly in the wild.

It is a childhood dream come true to conduct research on these iconic dragons and come to know individual frillies so intimately.”