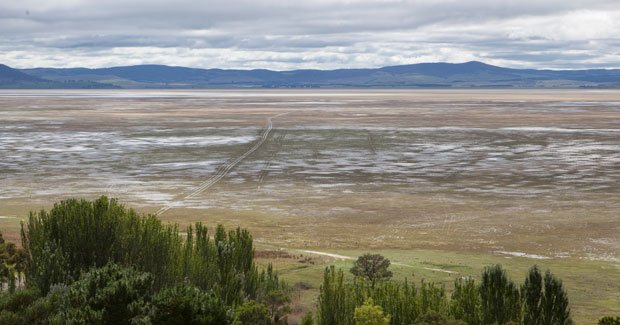 FOR ANYBODY DRIVING a first-time visitor along the road from Canberra to Sydney, there’s a small pleasure that arises when you’re about 40 minutes out of the nation’s capital: the joy of explaining that Lake George, the lake running along the eastern side of the Federal Highway, empties and fills of its own volition.

“Impossible,” they say as they gaze across the 25km-long, 10km-wide expanse of water which, when full, looks like a permanent fixture.

But as locals know well, it’s possible for Lake George to disappear entirely. The large body of water rises and falls seemingly mysteriously, and has done throughout its history. But while micropalaeontologist Patrick De Deckker is fascinated by the lake, he’s quick to take any mystery out of the equation.

“There are no mysteries of Lake George. People say when it goes down a lake in New Zealand goes up, but that’s not true,” says the Australian National University professor, who has studied the water body for over 30 years.

In fact, Lake George isn’t a lake at all, he explains. “It’s actually a depression that turns into a lake when it fills. There’s always water below the lake floor, and amazingly, it is saline, but if you have more rainfall, the lake fills up,” he says.

While there’s no ‘mystery’ surrounding the disappearance of the lake, its mirage-like comings and goings remain a compelling tale. Changes in water levels, while not instantaneous, are dramatic. When full, the lake reaches a size of about 155sq.km, but when the water dries up, the lake-bed is used for grazing. In 1820, Lake George was described by Governor Macquarie (who named the lake after his king) as ‘a splendid sheet of water’, but by 1839 it was dry enough to ‘drive a team across the middle’. Further water rises during that century inspired early ideas of a lakeside resort complete with paddle-steamers, however by 1907, local observers commented more on the ‘neglected boathouses, jetties, decaying boats and launches.’

The lake’s constantly shifting water level, as well as its proximity to significant research organisations in nearby Canberra have made Lake George one of the most studied lakes in Australia. “The record of lake level changes is unmatched in Australia,” says Patrick.

It’s not only academics and 19th century entrepreneurs who have shown interest in this isolated locale. Over the years, Lake George has managed to inspire bird watchers (especially in the 1970s and 1980s, when the lake was so high its waters lapped the highway) and artists.

Dancer Vivienne Rogis falls into the latter category; she’s been dancing on and by Lake George for 13 years.  A founding member of Mirramu Dance Company, which works out of Mirramu Creative Arts Centre, based on the lake’s fringe, she says the changing landscape of Lake George is part of its artistic attraction.

Lake environment a mirage or muse?

“The environment plays a very collaborative role in what you create. Adding an audience into that means they’re going to experience that as well – how dry the ground is, how windy it is, how many flies there are – it will all impact their experience of the lake and your artwork,” she says.

Vivienne finds that the natural backdrop of the lake helps her express the environmental themes inherent in Mirramu’s work. “Often we’ll have a theme we are talking about, like water and the preciousness of it. That’s a vast environmental issue which you can see in the microcosm of the lake, especially given that for the majority of my experience with it, it’s been mostly dry,” she says.

The result is a creative experience that’s very different to working on a dance piece in a studio. “We dance on it. The first piece I did on the lake was Universal Lake in 1999. It was half-full. We danced on the lake bed, with water in the background. The actual quality and texture of the ground changes [as you go out further], so the mud is very sticky and very slippery. [But] when you’re dancing on it in the driest areas, it’s quite fine and powdery, and it can become almost soft if you dance on it for a while,” she says.

Festival for a changing environment

Vivienne is not the only artist who has drawn inspiration from Lake George in recent years. The area is now home to the biennial Weereewa Festival (named for the local indigenous people), which has been running since 1999 to celebrate, conserve and share the space with the broader public.

The festival will next be held in March in 2012. It will feature lectures by local Landcare groups, environmental and ecological forums, guided walks with birdwatchers, dance performances and art exhibitions. “There are a lot of visual artists, writers and photographers in the area,” says Vivienne.