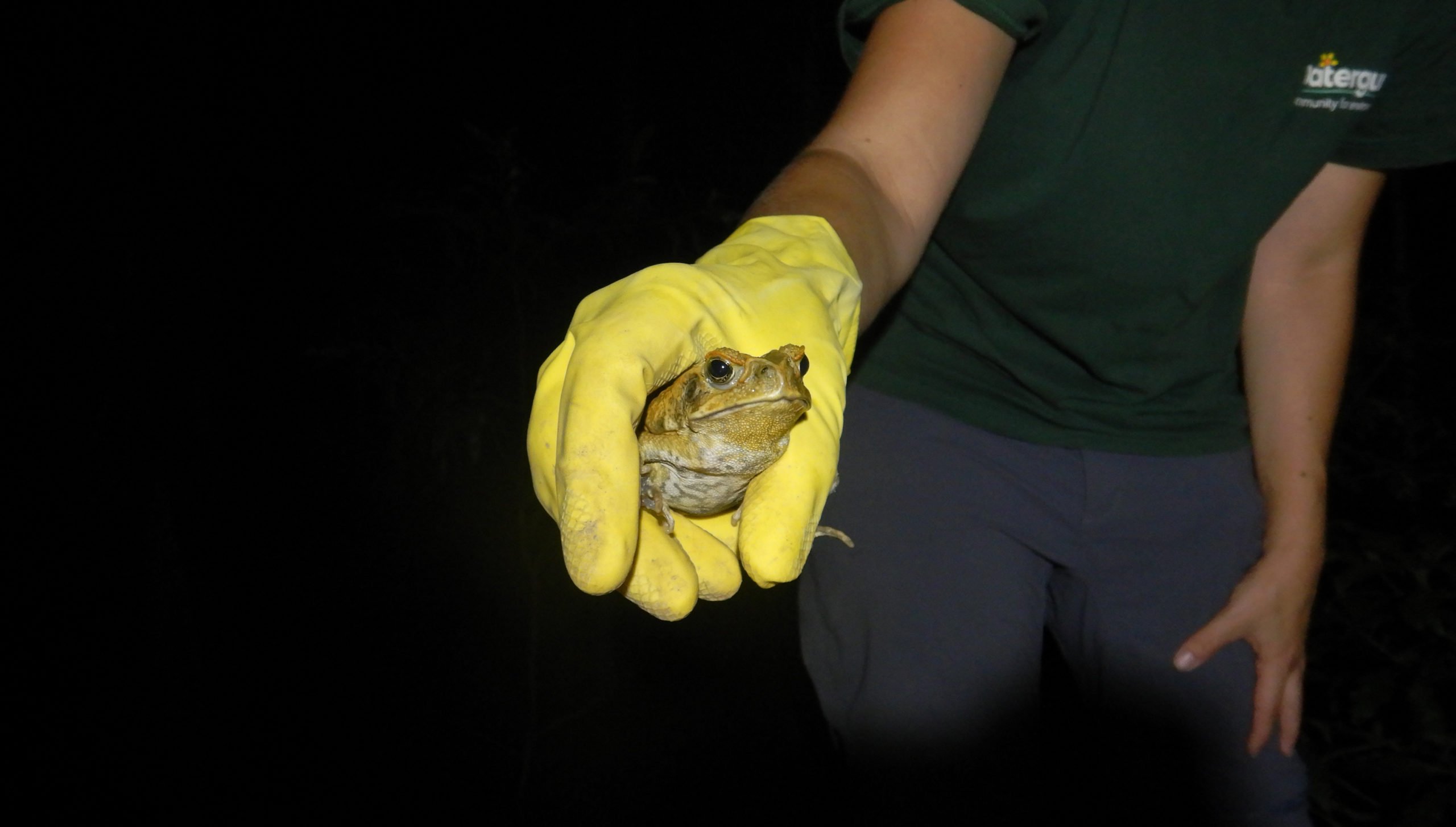 Emily Vincent remembers the first time she went cane toad busting. “I used to live up in the mountains where it is cooler and there weren’t many cane toads, but then moved down, and I was shocked because cane toads were everywhere,” she says. “The first night I caught in excess of 150 adult toads.”

That event led her to an important realisation: “After that first time, it actually hasn’t been that bad since. Now, I struggle to find 10.”

Since almost personally eliminating her own introduced toad population, Emily wondered what would happen if everyone with a cane toad problem banded together, even for just one day, to remove them.

Next week, Queensland non-for-profit group Watergum, for which Emily is a program manager, will run the inaugural Great Cane Toad Bust. The event is a culmination of three years of citizen science investigations that suggest individuals can have an impact on reducing cane toad populations.

“What we’ve observed is, if you go out regularly, as little as once a month during the season, you can more or less eliminate your resident population,” Emily says. “Removing cane toads from the environment prevents them from breeding further and allows native species to reclaim that habitat.”

Despite how it sounds, cane toad ‘busting’ doesn’t involve going out onto your property and taking a cricket bat to any toad in sight.

Instead, people are being asked to collect toads and pop them into their fridge for 24 hours. “This slips them into a natural amphibian state called torpor,” Emily explains. “It’s basically a comatose state and their pain receptors are shut off. Once they’re in this state they can be transferred to the freezer, and they don’t experience the pain of being frozen.”

The Great Cane Toad Bust will begin on Monday 24 January and run until January 30. You can register as an individual or as a toad-busting group. However, it’s recommended participants take Watergum’s free crash course on cane toads and cane toad busting available on their website prior to heading out.

Cane toads have wreaked havoc on the Australian environment since they were deliberately introduced back in 1935 in the hope they’d put a stop to the damage pest beetles were having on sugar cane in North Queensland. Without any effective predators, cane toad numbers have since skyrocketed, creating enormous problems for native wildlife, which have no protection against poison contained in glands on the back of the toad’s neck.

Only in the past decade have Australian animals, such as native water rats and some species of native bird, learnt how to eat the toads safely. However, cane toad poison isn’t the only problem,

“The females can produce 70,000 babies per year so they can take over an area so fast, and their tadpole stage is really short – as little as three weeks,” Emily says. “It means cane toads can lay eggs in puddles and all the baby toads can emerge before that puddle has dried up. They also have incredible appetites in comparison to other amphibians. They can eat hundreds of insects per night and they’re taking these food resources away from native animals.”

Completely eradicating cane toads from Australia is, unfortunately, a pipedream. For now, the focus is on buying native animals more time.

“What we’re really trying to do is basically keep their numbers down until native species learn how to control cane toads on their own,” Emily says. “More and more species are learning how to eat cane toads safely. It’s becoming a learned behaviour and eventually they’ll be able to manage the situation themselves. But until then they need a helping hand from us.”

Emily says there are some key rules when it comes to cane toad busting. One of the most important is to always avoid killing a native frog by mistake.

“Once you get familiar with cane toads, it should be quite difficult to mistake them,” Emily says, reassuringly. “The most important thing we tell people is if you’re not 100 per cent sure then just leave it alone. It’s much less damaging to leave a cane toad in the environment than it is to remove a native frog.”

Emily says look for the distinctively large poison glands on a cane toad’s neck and its “grumpy” expression: “Native frogs generally have happier expressions in comparison to toads, so that’s also a good indicator.”

Watergum is also asking people to remove cane toad tadpoles from the environment, as well as busting adult cane toads. “This is a stage where people can get it really wrong,” Emily warns. “Cane toad tadpoles can be quite small. It’s native frogs that have much bigger tadpoles. Cane toad tadpoles are jet-black. The way they develop also gives them a diamond shape and that’s how you can identify them.”

Emily also recommends joining local Facebook groups dedicated to identifying frogs and using the educational resources on the Watergum website, where you can also log all your data.

“We hope that by working together and tallying the numbers for the whole of Australia,” Emily says, “we can show that there is hope with Australia’s cane toad problem.”