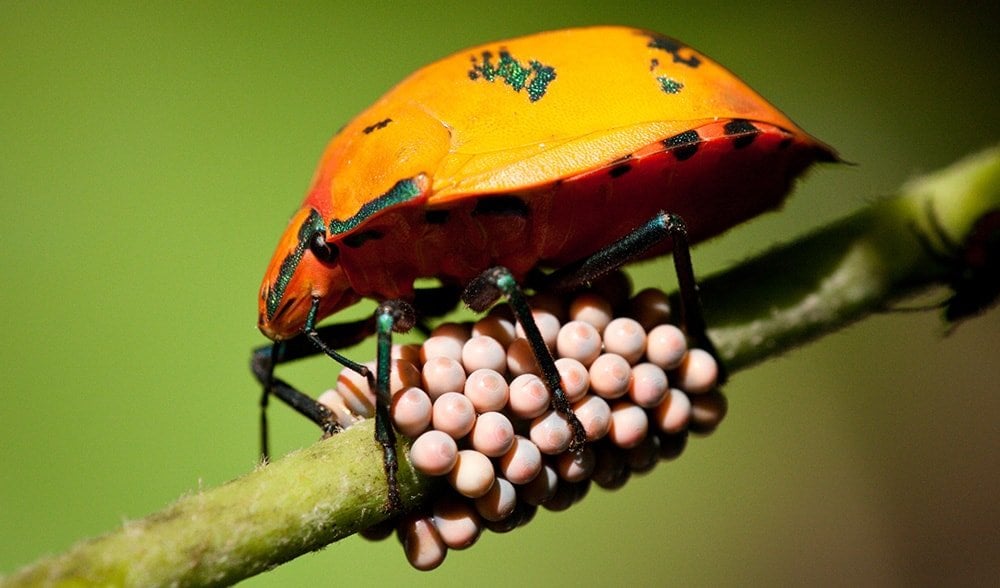 There’s the mole cricket, which is basically the platypus of the insect world, and then there’s the golden tortoise beetle that looks like it’s wearing a miniature space suit.

Oh, and how could we forget Australia’s giant burrowing cockroaches that you can actually hear hiss, and are also weirdly fantastic parents (for the insect world).

What you probably haven’t given a lot of thought to, however, is the incredible variety of shapes, colours and sizes of Australian insect eggs.

Why do insect eggs look the way they do?

Recently, Harvard University pulled together an enormous database of 10,500 descriptions of eggs from approximately 6700 insect species, giving us new insights into why insect eggs look the way they do.

By analysing large amounts of data, the scientists revealed that an insect’s habitat or where the egg is laid plays a bigger role in the form and function of an insect egg, rather than biological processes, as previously thought.

“It’s an extraordinary new piece of work that lets us link the evolutionary histories of insects with their ecological habits and has generated many new hypotheses linking form to function for insect eggs,” says University of Sydney entomologist Dieter Hochuli.

“It will change how we think of the egg stage and how it influences, and is influenced by, the ecology of latter stages of the insect life history.”

Dieter explains that the eggs that insects produce are really “custom-made to do different jobs.”

“That can affect the size, shape and type of egg quite dramatically.

“One big driver is that the eggs are terrific food for many other insects, something the form of the eggs often attempts to prevent.

“Another driver is that some of them are designed for a longer term, with the animals inside using the protection of the egg to avoid the more hostile times of year, such as cold and dry times.”

The most extraordinary insect eggs

Here’s the fun part. The eggs of Australian insects are brightly coloured, weirdly shaped and come in a range of bizarre sizes.

There’s the cotton harlequin bug, which can be seen protecting its gorgeous clutch of pink eggs that the insect delightfully wraps around the stem of native beach hibiscus. We have the giant Australian centipede, who cuddles its bundle of yellow eggs that look a lot like what you’d find in the bottom of your bubble tea. And of course, there’s the eggs of the green lacewing butterfly, which are attached to these long, slender stalks anchored on the leaves or stems of a plant, which protects them from being attacked by ants. The insect eggs made to deceive

One of Dieter’s personal favourites are the eggs of stick insects, and for good reason.

“They have amazing biology, with their habit of pretending to be seeds and tricking ants into moving the seeds into safer places,” he says. Dieter also admires the large group of insects that make a living from hijacking other insects’ eggs.

“These insects, mainly wasps, specialise in laying their eggs inside the eggs of other insects.

“So sometimes you can try to rear eggs to see what laid them, only to have wasps come out of eggs that were supposed to be caterpillars, beetles or even other wasps.

“The aesthetics, the stick insect fakery and the resilience of these amazing structures to environmental extremes are all very impressive.”