Home Topics Wildlife Why is a bluetongue lizard’s tongue blue?

Why is a bluetongue lizard’s tongue blue? 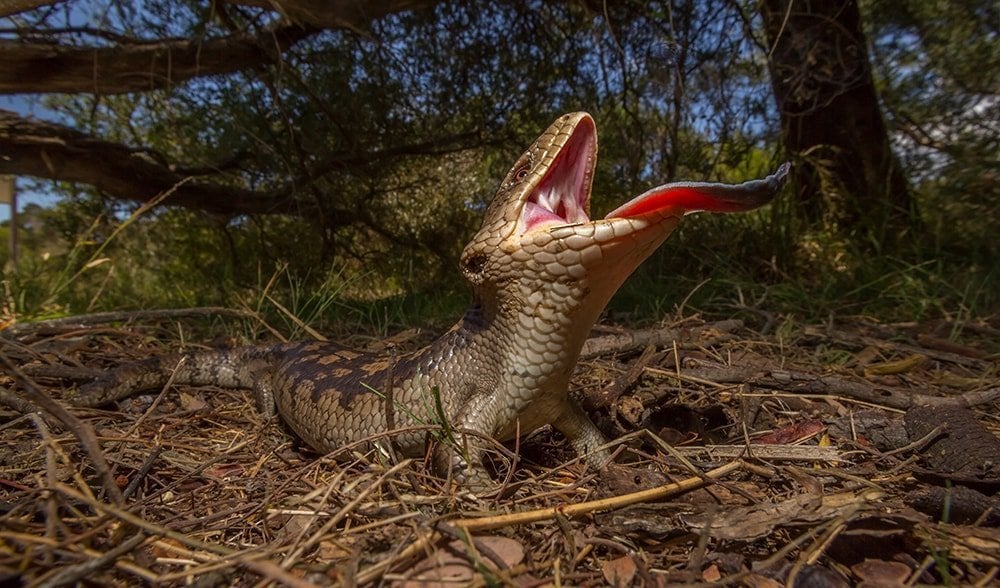 Image credit: Nathan Litjens
Reading Time: 2 Minutes • Print this page
Ever wondered why the bluetongue lizard’s tongue is such an unusual hue?

YOU’VE PROBABLY experienced it yourself on a bushwalk – a startled bluetongue skink exposes its large blue tongue, often simultaneously hissing and inflating its body to look bigger and more threatening. Bluetongue skinks of a number of species are medium-sized, ground-dwelling lizards that are commonly found across Australia and New Guinea. They have become popular pets in Australia and around the world.

The bluetongue’s tactic may seem familiar to Australians, but this is an unusual behaviour and display for a lizard. And although it has long been assumed that this is a strategy for avoiding predators, nobody has tested the idea scientifically, until now.

Now researchers, including Dr Martin Whiting of Macquarie University in Sydney, have shown that, at least in the northern bluetongue skink (Tiliqua scincoides intermedia), the display is part of a last-ditch defence mechanism that these reptiles use to save themselves from being eaten, particularly from
bird predators.

It is, Martin says, so-called deimatic behaviour – a very fast display that is over quickly and highly conspicuous. These kinds of displays are intended to induce a startle response in a predator, such as an eagle or a hawk, overloading its senses and causing it to pause, slow or stop its attack. Australia’s frill-neck lizard is another reptile that uses this kind of strategy to avoid becoming prey.

“We suspect that such a highly conspicuous display deployed at close range to a predator will induce a reflexive startle response that will deter predators,” the authors report in the May edition of the journal Behavioral Ecology and Sociobiology. “We also hypothesise that this type of display will be particularly effective against aerial predators, for which an interrupted attack would not be easily resumed due to loss of inertia.”

“The lizards restrict the use of full-tongue displays to the final stages of a predation sequence when they are most at risk, and do so in concert with aggressive defensive behaviours that amplify the display,” says lead author Arnaud Badiane, also of Macquarie University.

The scientists made their discovery after taking 13 northern bluetongue skinks – the largest bluetongue species – and comparing the colour and intensity of different regions of their tongues. By using a device called an optic spectrometer to look at the tongues of skinks held in an outdoor enclosure near Kununurra, in the Kimberley, Western Australia, they discovered that the lizards’ tongues brightly reflected UV light. This is highly visible to predators such as birds, goannas and snakes. The intensity of the UV colour was found to be much greater at the back of the tongue than the front.

The researchers then simulated attacks to show that the skinks attempted to remain camouflaged – taking advantage of their brown stripy body colouration – until the very last moment, when they opened their mouths wide to expose their tongues, flattening and expanding them.

“The timing of their tongue display is crucial,” Arnaud says. “If performed too early, a display may break the lizard’s camouflage and attract unwanted attention by predators and increase predation risk. If performed too late, it may not deter predators.”

So, next time you startle a bluey while you’re out for a bushwalk, you’ll know just why it’s behaving the way that it does!