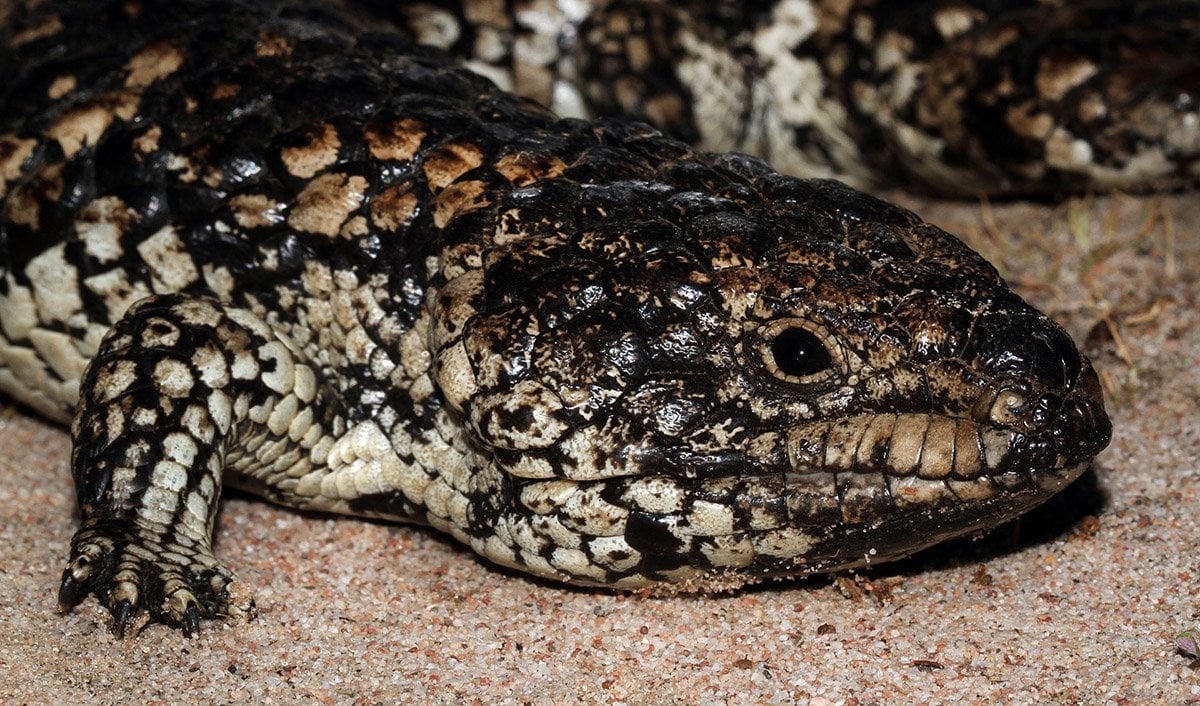 IMPRESSIVE IS A word the shingleback (Tiliqua rugosa) deserves. Remarkably for a lizard, it can live 50 years, and it looks striking, with that stumpy tail and big lumpy scales. It’s Australia’s answer to the small land tortoises found overseas – a sluggish, compact, long-lived vegetarian with an armoured back of large hard scales.

Shinglebacks are noticed on country roads where, being slow, they are readily approached (and, by the careless, run over). I sometimes see two together, and for this they are world renowned. Shinglebacks form long term partnerships, roaming in pairs, using smell to remain in loose contact. Many partnerships last more than a decade, and one pair studied by biologists was still consorting after 27 years, establishing this species as the exemplar of reptile fidelity.

Shinglebacks practise monogamy, more or less. DNA studies show 86 per cent of their young to have been sired by the female’s partner. ‘Divorces’ sometimes occur, when a small male is displaced by one that is larger.

Why shinglebacks form partnerships is not blatantly obvious. Parental care can’t be the reason because they don’t provide any. Biologist Michael Bull and colleagues at Flinders University proposed that a female feeds more efficiently when partnered to a male she knows, because she trusts him to detect danger. During the spring breeding season he often travels immediately behind her and waits in place while she feeds, sacrificing food to serve as look-out. The shingleback is a divergent member of the bluetongue genus (Tiliqua), something it reveals by having a vivid blue tongue. No other bluetongue has pair living, a stumpy tail and big buckled scales. Why evolution took this one in its own direction is very unclear. Bluetongues are skinks, though it is difficult to believe that the shiny little skinks in gardens are related to the shingleback.

With its looks and social life the shingleback should be a household name but its profile suffers from too many names – it is also known as the sleepy lizard, stumpy-tail, bobtail, pine-cone lizard, two-headed lizard and boggi. The names recall the recognition it achieved among rural folk long before there was a mass media powerful enough to unify language.

When I began this blog I had to decide what to call it. ‘Sleepy lizard’ prevails in scientific papers but ‘shingleback’ gets the most internet hits so I went with that, plus it’s the name I grew up with. This species has become one of Australia’s most intensively studied reptiles because it is so easy to find and handle, and endlessly interesting. The Australian Geographic Society has funded some of the research and I’m glad about that.