Whales to insects: a dingo’s breakfast on Fraser Island 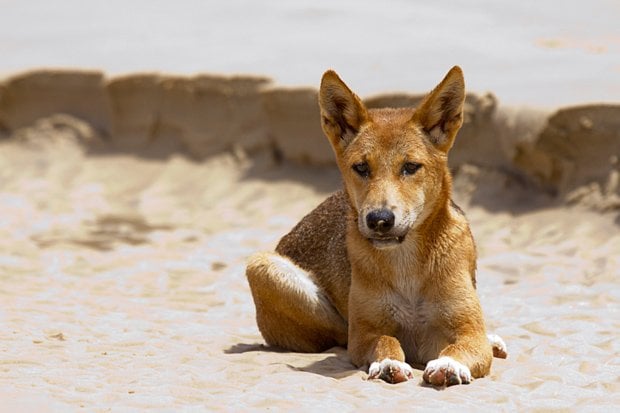 Fraser Island dingo. Image credit: Andrew Gregory / Australian Geographic
Reading Time: 4 Minutes • Print this page
Research shows that the diet of Fraser Island dingoes ranges from bandicoots to iPods. What can be done to maintain a healthy population on the island?

DINGOES ON QUEENSLAND’S popular Fraser Island are healthy and well, contrary to local claims. In fact, they consume one of the widest size ranges of prey in the animal kingdom, according to recent research published in Scientific Reports.

Dingoes are a national and international icon of great public and conservation interest. As Australia’s largest terrestrial predator, they enjoy similar popularity to other top predators such as lions, bears and wolves.

Fraser Island’s dingoes helped to resolve the Azaria Chamberlain case and are regarded as one of the purest remaining strains of dingoes in Queensland.

About 100-200 dingoes, representing about 19 packs, live on the island at any one time. Most dingoes are seen on the popular eastern beaches, where the occasional euthanasia of dangerous dingoes always fans the flames of controversy and conspiracy.

Observations of “skinny” dingoes have led some to voice concerns that Fraser Island dingoes are starving with nothing to eat and some predicted they would even be extinct by now.

So why are they still alive and doing well in good numbers? The answer may have something to do with their eating habits.

Based on 2,196 dingo scats, 144 stomach samples and more than 30,000 camera trap records, my colleagues and I found that Fraser Island dingoes eat prey ranging from tiny insects to giant dead whales washed ashore – and everything in between.

Eastern grey kangaroos, feral pigs and even feral horses showed up, along with threatened long-nosed potoroos and eastern chestnut mice, confirming the continued presence of these animals on the island.

Given the wide range of food items going down the hatch, it should come as no surprise that Fraser Island dingo body weight and condition are doing remarkably well.

From 455 weight records (the largest known sample of dingo weights ever reported), Fraser Island dingoes over 12 months of age weigh in at 16.6 kg on average, compared to mainland dingoes’ typical weight of only 15.7 kg.

And when it comes to body condition scores (ranging from 1 for skinny dingoes to 5 for grossly obese animals), nearly 75% of dingoes scored 4 or 5. Only 5.6% had a score of 2.5 or less.

Parasite loads were also low and comparable to other dingo populations.

So what does this all mean for Fraser Island dingoes?

The available data does not support notions that Fraser Island dingoes are starving, have restricted diets or are in poor physical condition.

Rather, they indicate that dingoes on Fraser Island are capable of exploiting a diverse array of food sources, which contributes to the vast majority of them being in good-excellent physical condition.

Underweight or skinny dingoes are still sometimes seen, and will continue to be seen forever, but this is a normal and natural phenomenon associated with wild populations of dingoes and other wildlife, and is nothing to be concerned about.

Skinny dingoes may represent socially excluded individuals, females that have recently lactated and raised litters, sick or diseased animals, or those suffering from temporary nutritional stress during normal periods of food shortage.

Dingoes also have excess digestive capacity, meaning that they do not need to eat every day and regularly endure periods of several days without food or water. As a result, variable body condition scores and fat reserves can be expected in and between individuals under normal conditions.

It is unreasonable to expect that every individual in a population will be the same weight all the time, or that all individuals will survive. Although some individual dingoes may be “skinny”, the population actually contains far more “fat” individuals. Dingoes on the island are also known to live for over 13 years, which is a long time for a wild dingo.

Comparisons with previous studies also suggested that dingoes have returned to a more natural diet over the past 20 years. This is in line with a range of sound non-lethal management approaches, including increased education and the exclusion of dingoes from open rubbish dumps and other substantial sources of human food (such as townships and campgrounds).

This is all good news for the future of Fraser Island’s dingoes. If dingoes focus more on eating natural food sources (such as bandicoots and stranded marine whales) and less on human-provided food, then we may see fewer negative dingo-human interactions or attacks in the future, and an ultimate reduction in the number of dingoes needing to be euthanased for dangerous behaviour.

Continuing to feed dingoes with human food would be a disaster for Fraser Island. The saying “a fed dingo is a dead dingo” is not far from the truth.

Research from around the world has shown that supplementary feeding of wild animals increases their numbers beyond the point that the environment can handle. This ultimately leads to more animals in need of feeding and subsequently greater numbers of deaths, in both the fed animals and other wildlife too.

This has been observed with dingo populations in other areas of Australia and can be easily avoided on Fraser Island with proper management and ongoing research.

Benjamin Allen is a Wildlife ecologist at the University of Southern Queensland.