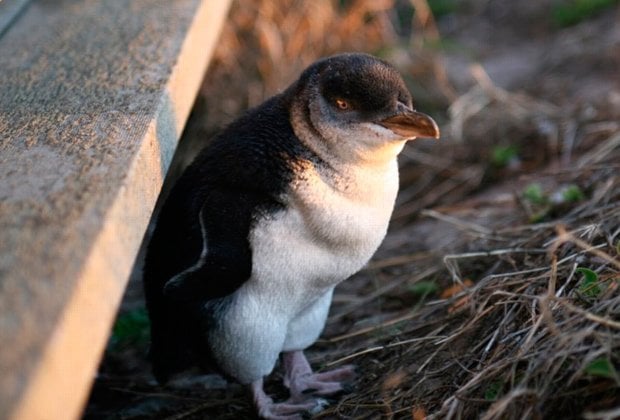 A little, or fairy, penguin on Phillip Island. (Credit: Wikimedia)
Reading Time: 3 Minutes • Print this page
Little penguins on Phillip Island have been saved by an innovative fox eradication program.

ON PHILLIP ISLAND EVERY evening, the march of the penguins captivates onlookers as thousands of little penguins waddle their way from the shore to their burrows in the dunes.

It’s one of the best places in the world to see little or fairy penguins (Eudyptula minor) – the smallest of penguin species. But this daily trek has been declining as fox populations have taken hold since being introduced onto the island by early settlers in 1901.

“Old fox hunts were something they embraced and brought across with them, but they didn’t realise the flow-on effects; penguins aren’t evolved to [avoid] a predator like the fox,” says Stuart Murphy from Phillip Island Nature Park.

In absence of their usual prey, foxes took to eating penguins – and since then, nine out of the original 10 colonies have perished. Stuart says a single fox can kill up to 40 penguins a night.

“Foxes will kill multiple animals when times aren’t good – caching [them] somewhere for when condition aren’t that favourable for hunting”.

Fox eradication the only way to save penguins

Since the 1980s, fox control programs were established to curb their impact, but fox population numbers didn’t change and the penguin killing continued.

In 2007, Stuart and his team realised extinction of the little penguin was a real possibility, so fox culling, rather than controlling, became the aim, to once and for all rid the pest from the island.

“Seeing the penguins hanging on for the past 100 years – if we do nothing we’ll lose that last remaining colony,” he says.

Dr Mike Braysher, an expert in invasive species at the University of Canberra, NSW, says the park was right to begin eradication.

“We know [foxes] have been implicated in the major decline of small mammals there…little penguins are very vulnerable to predators like foxes- that’s a clear case for removing foxes.”

In the five years since the program began, the team have significantly reduced fox numbers, down to a handful of individuals – and with no penguin kills recorded on the Summerland Peninsula for two years.

Other species, like the ground-nesting birds such as short-tailed shearwaters and hooded plovers, have also benefitted from a decrease in predators.

The program recently received the Banksia Land and Biodiversity Award for its innovative methods of eradication, recognising the program’s potential to inspire other efforts to battle introduced pests.

Stuart and his colleagues undertook baiting, spotlighting, trapping and fumigating dens during fox-breeding season, but their innovation was the trialling of a new drug to reduced the pest’s ability to breed.

Called cabergoline, the drug is a remedy commonly used to treat Parkinson’s disease in humans. It terminates pregnancies in female foxes but doesn’t kill the fox itself. Stuart says it is used in areas where traditional 1080 – lethal poison used in baiting – may harm native wildlife too.

While initial trials of the drug have been completed, “we are still a long way off being able to use it in the field,” Stuart says.

The community has thrown its full support behind the fox eradication program.

“Most people on the island can see the bigger picture and what we are trying to achieve…We’ve also got half a dozen land producers [who] can see the value in getting rid of foxes.”

Tough times ahead for little penguins

With the predators nearly stamped-out, Mike warns the little penguin’s future is still not secure.

“It’s not just as simple as getting rid of the pest and it’s all going to be fine; it’s a lot more complex [and] a holistic approach is needed or it won’t achieve anything.”

Stuart agrees, saying most of their work still lies ahead.

The few remaining foxes on Phillip Island have proved weary of the control techniques so far, says Stuart, and “will require a huge amount of time and effort to locate and remove these individuals”.

The next step is to make the bridge from the mainland hostile to foxes, so the island cannot be repopulated with the predators.