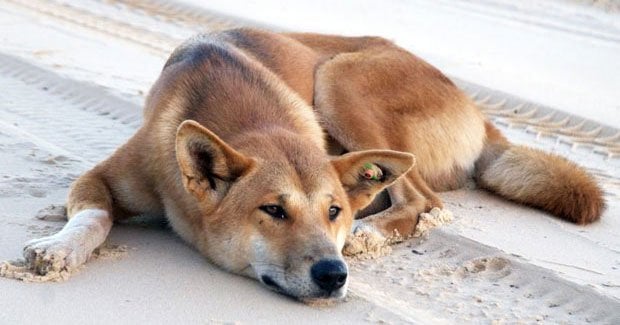 Dingo at Fraser Island (Photo: Bradley Smith)
Reading Time: 2 Minutes • Print this page
The ability of wild dingoes to react to social cues from humans sets them apart from wolves in the smarts department, a new study shows.

DINGOES OFTEN GET bad press. “People usually think of them as vermin,” said Bradley Smith at the University of South Australia.

But new work shows dingoes are extremely smart — smart enough to respond to human signals in ways that wolves cannot, and are able to solve problems that leave dogs frustratingly foxed.

Genetic work indicates that dingoes evolved in East Asia. They were probably tamed for use as a source of fresh meat and to protect villages, and they were brought to Australia, presumably for the same purposes, somewhere between 5000 and 3500 years ago. While dingoes are important to Aboriginal culture, they haven’t been selectively bred in Australia, and they mostly live wild. Bradley has studied genetically pure dingoes living at the Dingo Discovery Centre near Gisborne, Victoria. Part of the project investigated dingoes’ ability to respond to human gestures. Dogs are very sensitive to human body language, whereas hand-reared wolves can learn to understand only some signals. If food is hidden inside one of two containers, and a person briefly points to the correct pot, a dog puppy will quickly find the food, while a hand-reared wolf pup will not (and neither will a primate).

Bradley found that dingoes had no problem with this test, although they aren’t quite as good at following pointing as dogs. The results were published recently in the journal Animal Cognition.

In another test, Bradley’s team placed food within a V-shaped, transparent fence. Thus, to get to the food, an animal has to first move away from it. “Dogs are really bad at this. They bark and look back at the experimenter, asking for help,” he said. But wolves have no problem with this task – and, the researchers discovered, neither do dingoes. “They’re really amazing at it,” he said. The research for this test is due to be published in the journal Animal Behaviour.

Bradley thinks that the performance of dingoes, part way between wolves and dogs, can probably be attributed to early domestication in Asia, which may have involved selective breeding of animals that were better at communicating with people. If there has been no selective pressure to lose the ability over the past few thousand years, there’s no reason for it to have been lost, he said. In this way, dingoes might be a representative example of what some of the earliest domesticated dogs were like.

Others aren’t so sure. Lyn Watson, director of the Dingo Discovery Centre, thinks the dingoes’ performance reflects not a human impact on their evolution but an enhanced ability to communicate across the species barrier, no matter what the species. “They are very curious animals – in that way they’re more like cats,” she said. “And if they’re raised with other pets in a family, they create a team with that other species.”

Either way, the work reinforces Lyn’s personal experience that dingoes are smart, she said. “We joke around here that you shouldn’t leave your cheque book lying around, because they’ll forge your signature.”