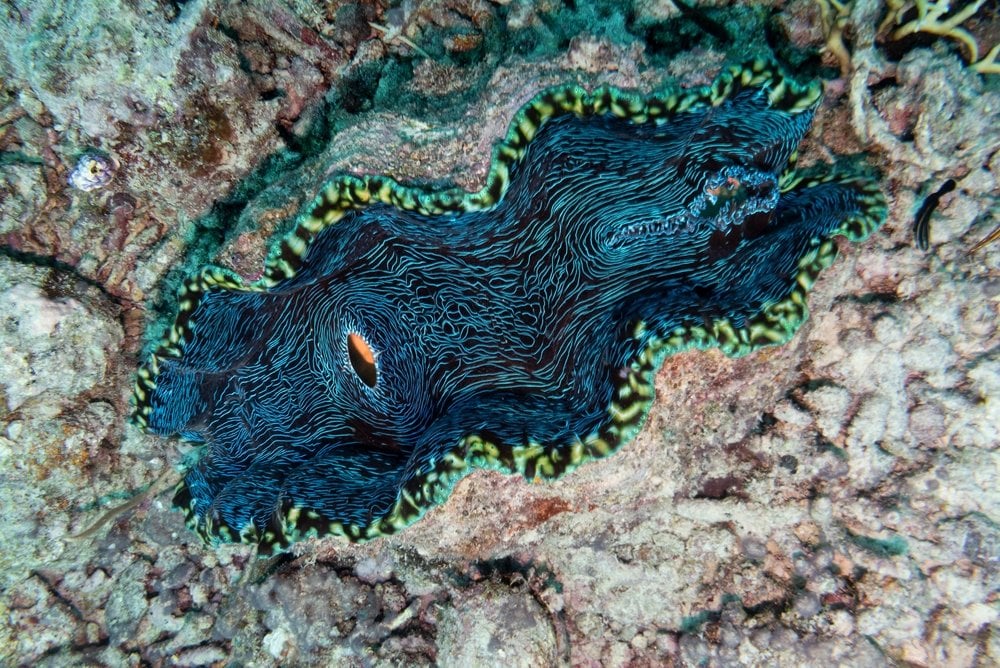 Think of the inhabitants of a coral reef, and chances are you’ll think of a giant clam, the largest aquatic mollusc on Earth at up to 250 kilograms and a metre long.

But despite its size and fame, the giant clam (Tridacna gigas) is in trouble. The tropical waters of the Indo-Pacific keep getting hotter due to climate change, and their shells and flesh are in demand. Some are already locally extinct.

Our new research out today has found these iconic megafauna face new threats like the marine heatwaves and acidifying oceans which come with climate change.

Is it game over? Not yet. We believe there are new ways we can manage clams on coral reefs, as well as creating new breeding programs designed to boost resilience to these threats and buy time while we transition to net-zero greenhouse gas emissions.

What’s been tried to save our iconic clams?

Despite their reputation as man-eaters – which came from exaggerated 19th century seafaring tales and Pacific Island legends – giant clams are gentle giants.

These charismatic animals are the only invertebrate of the Great 8 species, listed alongside manta rays and clownfish as a must-see for visitors to the Great Barrier Reef. Here, giant clams have been well protected from harvesting and snorkelers and divers can see eight of the world’s twelve giant clam species.

While giant clams are still common in Australian waters, in other areas they have not fared so well due to over-exploitation.

Since the late 1980s, breeding programs have helped rebuild over-exploited wild populations in the Pacific Islands, Southeast Asia and Japan. The success of breeding programs is not well reported, but we do know they are labour-intensive, often have high running costs and are limited in the area of coral reefs they can restock.

We need other methods to protect our giant clams from the looming new threats. If we save them, we can use their fame to help better protect coral reef habitat, which will save corals, fish and other invertebrates.

Why are giant clams under renewed threat?

Due to over-exploitation, nine giant clam species have long been included on the Red List of Threatened Species kept by the International Union for Conservation of Nature. All giant clams are protected under the Convention on International Trade in Endangered Species of Wild Fauna and Flora Appendices.

Rapid global climate change and pollution now pose major new threats to giant clams, while the slowly acidifying oceans now affect the range of all giant clam species from the Red Sea to the Pacific Ocean. Ocean acidification makes it harder for animals to build and maintain strong shells, particularly during their early lives.

How can we buy time for giant clams while we decarbonise?

Far and away the best biodiversity conservation strategy is to achieve net-zero carbon dioxide emissions as soon as possible and achieve a stable climate below 1.5℃ warming. Keeping well below 1.5℃ warming will help save giant clams and coral reefs.

While we wait, we need to help clams adapt and endure. In our research, we brought together recent work from lab groups around the world exploring giant clam responses to climate change and pollution.

We now know high temperatures from global warming and marine heatwaves cause the most stress to giant clams in shallow waters, while ocean acidification is causing most impact – whether lethal or just damaging – = on giant clams in deeper waters.

Poor water quality and lower light levels caused by sediment-heavy run-off from cities and farms are also making life harder. This is compounded by the fact that suitable habitat for giant clams is being squeezed by climate change and pollution.

This information is useful, because it can help reef managers plan the best conservation strategies to help giant clams survive rapid climate change, such as by seeking out possible new habitat for giant clams and breeding more resilient individuals.

Aquaculture programs can help by getting baby clams used to slightly warmer, more acidic and darker waters during breeding and rearing before transplanting them out to the wild. They could also offer the clams symbiotic microalgae that are more tolerant to higher temperatures or light levels in early life.

We must also boost the profile of giant clams. If more people recognise them as flagship coral reef species, we will have a better chance of getting them the help they need. By protecting their existing habitat, valuing their tourism potential and deploying citizen science programs, we can make the plight of these remarkable creatures more widely known and buy them time.