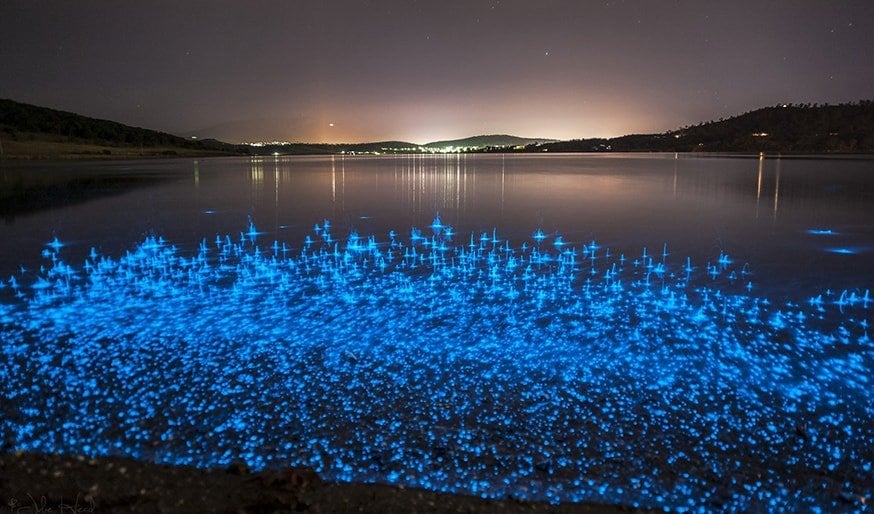 IT’S A phenomenon that’s become so popular to see and photograph it has its own Facebook group – Bioluminescence Australia – with about 9000 members.

This forum allows users to alert others to sightings of bioluminescent plankton blooms, and swap spectacular images, videos and stories of their experiences.

Through this group in August, photographer and amateur astronomer David Finlay was first alerted to a remarkable bloom along the beaches of Vincentia, Jervis Bay, on the New South Wales south coast.

Sixty people gathered that evening to see planktonic organism Noctiluca scintillans glowing by the bucketful along the tideline.

The lightshow grew brighter and lasted 4–5 hours as the tide came in. “It was hard to believe,” David told ABC Radio. His captivating images were subsequently splashed across the Australian media.

David is one of many to recently take images and video of this kind of bioluminescent bloom. A few days earlier, the Port of Napier, in New Zealand, was aglow with Noctiluca. Similar blooms were filmed at Jervis Bay in 2013 and 2015. Port Lincoln in South Australia and Lauderdale, near Hobart in Tasmania, are now other common places to witness bioluminescence, and striking images of the phenomenon have featured in the Australian Geographic Nature Photographer of the Year competition.

Noctiluca – also known as ‘sea sparkle’ – is neither plant nor animal, but a single-celled planktonic organism called a dinoflagellate, which ingests other plankton. With diameters typically of about 0.5mm, dinoflagellates are hard to see with the naked eye. But when they bloom en masse – often due to excess nutrients in the water – they can form a red slime.

At night, however, when these tiny organisms are disturbed by movement, such as footsteps or pounding surf, they emit a brilliant blue glow.

Light is produced by the compound luciferin, which in dinoflagellates is derived from chlorophyll, the chemical plants use to turn light into food.

According to Scripps Institution of Oceanography in California, the light flashes from individual dinoflagellates (which together form the overall glow we see) startle their main predators, also tiny organisms. These also act as a ‘burglar alarm’ attracting even larger predators to pick off Noctiluca’s primary predators, copepods (small crustaceans).

But is the increasing incidence of this bioluminescence show actually shining a light on the environmental damage we are doing? Bioluminescent blooms are linked to two environmental problems: they often occur around bays with river mouths, and they’re also more frequent after heavy rainfall. Both suggest pollution and agricultural run-off are leading to a concentration of nutrients such as phosphorus and nitrogen in the water causing populations to explode.

The spread of sea sparkle is also linked to climate change. Before 1994 they’d rarely been seen around Tasmania. But as waters have warmed, this has become one of the most common places in Australia to see them.

Rare bioluminescent blooms in Mumbai, India, in May this year, and along the beaches and bays of China and Hong Kong in 2015, have worried authorities there. Noctiluca blooms can kill fish by competing with them for resources and excreting toxic quantities of ammonia into the water. This year, scientists at the US National Oceanic and Atmospheric Administration and Indian National Centre for Ocean Information Services blamed the intense blooms in Mumbai on climate change.

So, while there’s no question these marine equivalents of the aurora australis – also observed at night in Australia’s south-east – are beautiful to behold, there’s a more complicated and worrisome story behind their growing prevalence.