The moment of solar eclipse totality

The appeal of total eclipse and the birth of a new generation of Australian umbraphiles (eclipse chasers).
By Natsumi Penberthy • August 19, 2014 • Reading Time: 2 Minutes 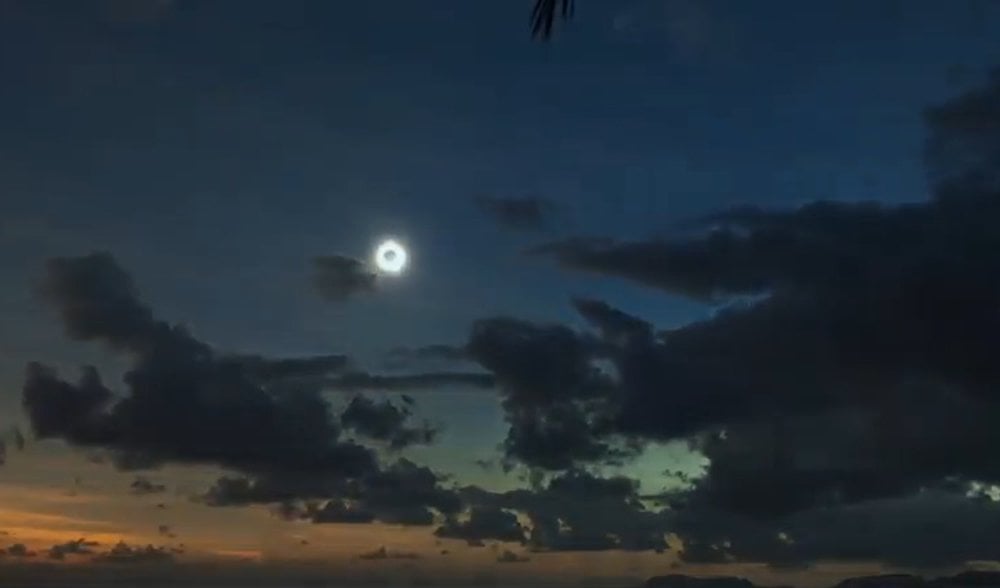 SITTING ON PALM BEACH, 30 minutes north of Cairns, I have to admit I wasn’t expecting the “totality” (when the moon completely covers the Sun) of Wednesday’s solar eclipse to be all that different from the view I was getting of the partial eclipse. The AG office had watched the much rarer Transit of Venus in June with interest already, but I learned that morning, that a total eclipse is a very different beast.

It was to somewhat surprised cheering that the total eclipse completed, and the Sun’s normal surrounding flair was suddenly knocked-back into a small black dot, with an undulating white edge. It’s a powerful visual moment, as the Sun’s light is seemly sucked inwards, totally unnerving a dog next to me who took it as his cue to bark at nothing.

For two full minutes hundreds of people – lit only faintly by the Sun’s corona, flashing cameras and the automatic streetlights that turned on behind us – looked directly at the Sun. Of the photos that emerged, only those with special filters attached to their cameras captured the scene somewhat faithfully. But, given the light conditions – clichéd or not – you really had to be there.

Everywhere in Palm Cove is 50m from the beach, and the holiday town isn’t in a hurry. So before the event, despite a general fission of excitement, most people had wandered leisurely out to the beach from 5:00am onwards. Setting up their big telephoto lenses or grabbing a spot on the sand, they had put on a variety of viewing devices ranging from Ned Kelly-esque welder’s helmets to flimsy $4 eclipse glasses.

Despite some discouraging drizzle the day before, and teasing cloud cover during the event, in the end Palm Beach had an almost perfect view. Aboriginal astronomy researcher from UNSW, Duane Hamacher, and astronomy PhD student Tui Britton had looked at complete grey cloud cover the day before and joked that astronomers in town were being told not to say the word ‘cloud’, hoping to ward off any bad weather luck. Some dedicated chasers had looked at the sky and jumped into their cars heading inland, hoping to beat the weather patterns that come in over the Great Dividing Range.

In the end, the day was saved by a brilliant morning. During the two minutes of totality viewers had time to register the lack of wildlife sounds and take a few photos, but the spectacle was tantalizingly short. The re-emergence of the Sun’s glare appeared as a flash of light, briefly lighting up the clouds with the world’s quickest sunrise glow, as the Sun peaked out the side of the moon.

The whole thing was over in almost a blink – just enough to whet appetites. This taste probably gave birth to a whole new generation of Australian umbraphiles. If that’s you, I’d look into booking a good spot for the 2028 total eclipse over Sydney now.