The bends: anatomy of decompression sickness

Scuba diving can transport you to a magical underwater world, but in rare cases the pressure can be dangerous.
By Jess Teideman • August 21, 2012 • Reading Time: 4 Minutes • Print this page 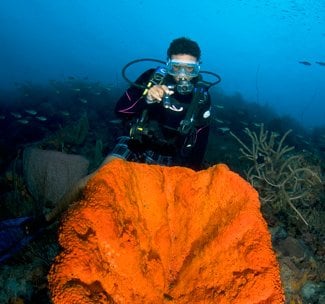 IT WAS A BRIGHT winter day in 2001 at Kingscliff in northern NSW, and 18-year-old Daniel Trollope was on one of his regular dives to the reef. It wasn’t until the rugby union player got to his first decompression stop at 5m that things started to go wrong. He felt exhausted and noticed sharp pains in his lower back.

“When I got to the surface, I blacked out and had to be pulled into the boat,” Daniel, now 28, says. “I could hear everything around me, but couldn’t even open my eyes.”

Back on dry land he walked to waiting paramedics. That was the last time he walked. Daniel, an experienced diver who says he’d followed all safety procedures and used both dive tables and a dive computer, was suffering a severe case of the bends – which happens in roughly one in 20,000 dives. After 16 visits to the recompression (hyperbaric) chamber, he regained some feeling, but was left with symptoms similar to spinal-cord injury.

Decompression sickness (DCS), known as ‘the bends’ because of the associated joint pain, is a potentially deadly condition caused by bubbles of nitrogen gas forming in the blood and tissues. It’s most common among divers using scuba tanks, but can affect free-divers and people at high altitude.

Associate Professor Michael Bennett knows all too well its effects on the human body. Michael and his team at the Department of Diving and Hyperbaric Medicine at the Prince of Wales Hospital in Sydney treat about 60 cases of the bends – ranging from mild to severe – each year.

“Inexperienced divers have an increased risk because they have more difficulty following safe-diving practices,” he says. “They’re more anxious, or are unsure of the processes, and are [therefore] more likely to ascend rapidly or have equipment failures.”

How ‘The Bends’ works

The air we normally breathe is a mixture of gases, mostly nitrogen and oxygen (78 per cent and 21 per cent, respectively, at sea level).  Both dissolve into the blood, but unlike oxygen, which has a vital metabolic function, nitrogen is inert and is expelled as we breathe out. At 10m, the pressure your body is subjected to is almost double that at the surface. As water pressure increases, so does the amount of nitrogen absorbed. This remains dissolved in your blood and tissues until your return to lower pressures at the surface.

As you ascend, nitrogen diffuses out of the tissues and is expelled in your breath. The problem comes if you ascend too fast – dangerous bubbles can form in the blood and tissues. It’s similar to what happens with a can of carbonated soft drink, saturated with dissolved carbon dioxide. When the pressure is released by opening, the gas rapidly forms bubbles. Imagine how violently gas can depart a shaken can, and you get a sense of the potential damage to the body’s organs.

The bubbles lead to a range of symptoms, which emerge soon after you surface. Pain is often the first indicator, Michael says, usually in the joints and muscles – and many divers mistake it for muscle fatigue. Other symptoms include unpleasant itchiness and skin rashes caused by bubbles in and under the skin, as well as headaches, dizziness and nausea. That’s in mild cases of decompression sickness. More serious damage can be done to arteries.

“When bubbles form, they can travel down blood vessels and wreck the inside lining,” says Lieutenant-Commander Dr Peter Smith, officer in charge of the Australian Navy Submarine and Underwater Medicine Unit. “Blood vessels are designed to be kind of Teflon-coated [non-stick]. But the bubbles can rip off all the coating, then everything starts to stick, and the blood vessel can become leaky and stop working. When that’s happening all over your body, it can cause a lot of damage.”

In the most serious cases paralysis, brain damage, heart attacks and breathing difficulties can result. It’s possible for the bubbles to enter the brain and spinal cord. In these cases, the damage can cause tingling, numbness and unconsciousness. Damage to the brain can cause vision impairment, headaches, confusion and problems with balance and coordination. Cases that lead to strokes, seizures, paralysis and death are often due to arterial gas embolism: air bubbles that form in one place but get lodged in the heart, lung or brain.

How to avoid The Bends

The best way to avoid DCS is to follow advice on rate of ascent. Failing that, treatment can come in the form of painkillers for mild cases, oxygen (which helps speed up the elimination of nitrogen) and the use of a hyperbaric or recompression chamber. These chambers expose sufferers to high pressure, causing nitrogen bubbles to redissolve and safely diffuse out of the tissues. “The standard treatment for a severe case is one five-hour session [at a maximum pressure equivalent to 18m],” Michael says. “That one plus a shorter one at about 14m is enough to treat most people. We usually stop them from diving for four weeks, and re-examine them to make sure they’ve completely recovered.”

The experts stress that taking precautions is the best way to avoid disaster. The advent of dive computers, to complement dive tables, has been a big help in recent years, says Peter. “Diving around the world is much safer than it used to be, because if you’re diving on air [tanks], we now know much more about how far you can push it safely,” he says. “This is one reason why diving on air is safer than diving on other [proportions of] gases: the safe limits are better known. Despite this, people can still ‘get bent’ diving within safe limits.” It is critical to plan ahead and check equipment is functioning. Ensuring that you have enough gas to take the safety stops is a prerequisite – a dive to 18m, for example, requires a five-minute stop at 5m.

One final thing to avoid, Peter says, is flying within 24 hours. Travelling in aircraft that are not fully pressurised at altitude can cause nitrogen bubbles to form, even when there was no problem at ground level. “One of the classic times for divers to get bent is flying home from a diving trip,” he says. “The plane takes off and goes up to altitude, and all of a sudden people start getting symptoms.”