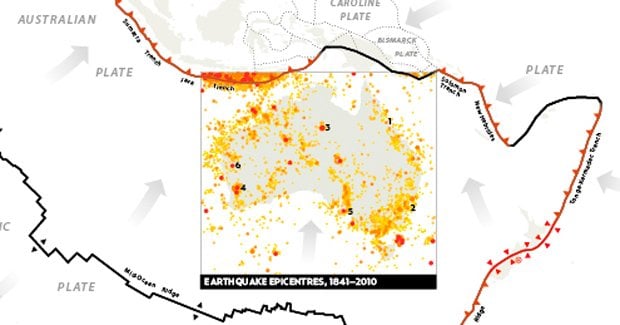 Earthquakes in Australia are quite common, despite its being in the middle of a tectonic plate. (Michael Payne)
Reading Time: 4 Minutes • Print this page
Earthquakes don’t only occur near our neighbours Japan and New Zealand – they’re common in Australia too.

WHEN THE GROUND BEGAN to shudder, Gavin Corica didn’t worry about it – at least not at first.

“It’s not uncommon in Kalgoorlie to feel the ground vibrate because of the mining activity,” says the physiotherapist, who until recently had a practice in the West Australian town. “But then I thought that the morning was an unusual time for a blast – and then the ground started to shake sideways.”

A few seconds after that, it felt as though someone was driving a truck through the front of the building, he says. “I could hear all these sounds, like massive three-tonne boulders falling and crashing on the ground, and the lights went out. That’s when I, and the patient I was with, looked at each other and pretty much ran for the doorway.”

It was 8.17am on 20 April 2010, and an earthquake measuring magnitude 5.0 on the Richter scale was ripping apart the earth 10km south-west of Kalgoorlie. People reported feeling the earthquake up to 200km away, and, like Gavin’s building, many others within a 10km radius were badly damaged.

Pacific plate the ‘Rim of Fire’

Most of the world’s earthquakes happen at so-called plate boundaries – parts of the planet where tectonic plates are pushing against one another – and about 80 per cent occur around the edge of the Pacific Plate (the ‘Rim of Fire’), affecting New Zealand, Japan, the west coast of North and South America and New Guinea.

A 6.3 earthquake with a shallow epicentre struck 10km south-east of Christchurch on New Zealand’s South Island in February 2011, turning much of the city centre to rubble and killing 181 people, while a huge, magnitude 9.0 quake (possibly the fourth most powerful ever recorded) struck off the coast of Japan in March creating a tsunami that killed an estimated 25,000 people, wiped entire towns off the map, and caused the largest nuclear disaster in history.

Australia doesn’t sit on the edge of a tectonic plate. However, the Indo-Australian plate, at the centre of which our continent lies, is being pushed to the north-east at about 7cm per year. It’s colliding with the Eurasian, Philippine and Pacific plates, causing stress to build up in the 25km-thick upper crust. This build-up of pressure within the plate can cause earthquakes in Australia.

In fact, Australia has more quakes than other regions that sit in the middle of plates and are considered relatively stable, such as the eastern USA. “The level of seismicity does seem to be significantly higher here,” says Professor Phil Cummins, an expert on quakes at Geoscience Australia (GA) and the Australian National University’s Centre for Natural Hazards. “But no-one really knows why that is.”

According to recent research by GA, there’s been about one earthquake measuring magnitude 2.0 or greater every day in Australia during the past decade. “There are likely to be many more smaller earthquakes that we cannot locate because they’re not recorded on a sufficient number of seismograph stations,” says Clive Collins, a senior GA seismologist.

Western Australia is a quake hotspot, with more quakes than all the other states and territories combined. But the GA data show that Adelaide has the highest risk of any capital. It’s suffered more medium-sized quakes in the past 50 years than any other (including one that struck in March 1954, just before the visit of Queen Elizabeth II) – and that’s because it’s being squeezed sideways.

In regions around plate boundaries, it’s possible to predict roughly when quakes are likely to happen, as scientists know where to look for any build-up of stresses. “We can’t predict with an accuracy that would be valuable for evacuation or early warning,” says Phil, “but we can forecast pretty well that certain parts of the plate boundary might be more likely to experience an earthquake in the next 10-20 years than others.” But for regions that sit in the middle of a plate, like Australia, quakes can strike anywhere, making prediction practically impossible.

Thankfully, most of our quakes are small, and go unnoticed, except by seismologists. But tremors of the size that terrified the residents of Kalgoorlie last August happen about every 1-2 years, and about every five years there’s a potentially devastating quake of magnitude 6.0 or more. The biggest quake ever recorded in Australia was in 1988, at Tennant Creek, NT – three quakes occured at Tennant Creek that day, yet remarkably, no one was reported injured.

Note: Previous to 2016, a 1941 earthquake in Meerberrie, WA was consdiered Australia’s largest earthquake. But with revisions, the International Seismological Centre downsised the quake from a magnitude 7.2 to 6.3. Read more: Australia has a new biggest earthquake.

Rather than being a natural disaster, some scientists have suggested that mining might have been to blame in that case. During the past 200 years, the region around Newcastle has experienced five times more earthquakes of magnitude 5.0 or more than the rest of NSW combined, says Dr Christian Klose, formerly of Columbia University in New York and now senior research scientist at Think GeoHazards, based in that city. “And we know that over the last 200 years, we have mostly deep-core coalmining around Newcastle,” he says.

Some experts think this might be enough to destabilise pre-existing faults in the Earth’s crust, and to trigger an earthquake. Certainly, human activity – like large dams being filled – has been linked to quakes overseas.

In Australia, it’s known that there’s an increase in seismic activity as dams fill. But Christian’s ideas about Newcastle are controversial. The quake happened deep within the Earth’s crust, making many scientists think it was more likely to be down to natural events. “It’s certainly possible that mining activity could cause changes in stress that might trigger earthquakes,” Phil says, “but it’s very difficult to prove.”